You may submit comments on this document, identified by NOAA-NMFS-2012-0141, by any of the following methods:

Instructions: Comments sent by any other method, to any other address or individual, or received after the end of the comment period, may not be considered by NMFS. All comments received are a part of the public record and will generally be posted for public viewing on www.regulations.gov without change. All personal identifying information (e.g., name, address), confidential business information, or otherwise sensitive information submitted voluntarily by the sender will be publicly accessible. NMFS will accept anonymous comments (enter“N/A” in the required fields if you wish to remain anonymous). Attachments to electronic comments will be accepted in Microsoft Word, Excel, or Adobe PDF file formats only.

Electronic copies of Amendment 103 to the BSAI FMP, Amendment 43 to the Crab FMP, the Environmental Assessment (EA), and the Regulatory Impact Review/Initial Regulatory Flexibility Analysis (RIR/IRFA) prepared for this proposed action are available from www.regulations.gov or from the NMFS Alaska Region Web site at http://alaskafisheries.noaa.gov.

NMFS manages the Bering Sea and Aleutian Islands Management Area (BSAI) groundfish fisheries in the exclusive economic zone off Alaska under the BSAI FMP. The Fishery Management Plan for Bering Sea/Aleutian Islands King and Tanner Crabs (Crab FMP) establishes a State and Federal cooperative management regime that defers crab fisheries management to the State of Alaska with Federal oversight. The North Pacific Fishery Management Council (Council) prepared the FMPs under the authority of the Magnuson-Stevens Fishery Conservation and Management Act (Magnuson-Stevens Act), 16 U.S.C. 1801 et seq. Regulations governing U.S. fisheries and implementing the FMPs appear at 50 CFR parts 600, 679, and 680. State regulations for managing the BSAI king and Tanner crab fisheries are subject to the provisions of the Crab FMP, including its goals and objectives, the Magnuson-Stevens Act, and other applicable Federal laws.

The Magnuson-Stevens Act requires that each regional fishery management council submit any FMP amendment it prepares to NMFS for review and approval, disapproval, or partial approval by the Secretary of Commerce. The Magnuson-Stevens Act also requires that NMFS, upon receiving an FMP amendment, immediately publish a document in the Federal Register announcing that the amendment is available for public review and comment. This document announces that proposed Amendment 103 to the BSAI FMP and proposed Amendment 43 to the Crab FMP are available for public review and comment.

Blue king crabs are found in isolated populations and do not exist uniformly across the Bering Sea. NMFS and the Alaska Department of Fish and Game (ADF&G) manage these isolated populations as distinct stocks where they occur. The PIBKC stock occurs around the islands of Saint Paul and Saint George in the Bering Sea. The PIBKC fishery was first opened in 1973. Total biomass and abundance peaked in the early 1980s. Over the last 20 years, the PIBKC stock abundance decreased relative to its peak abundance, and NMFS and ADF&G have implemented a number of increasingly conservative management measures to limit potentially adverse fishery effects on the stock.

Since 1999, as part of the joint management of the crab stocks under the Crab FMP, the ADF&G has closed the PIBKC fishery and the Pribilof Islands red king crab fishery to minimize the bycatch of PIBKC in that fishery. On an annual basis, ADF&G also closes specific State statistical areas where PIBKC are known to occur during the Bristol Bay red king crab, snow crab, and Tanner crab fisheries to minimize PIBKC bycatch in those fisheries.

In 1995, NMFS implemented Amendment 21a to the BSAI FMP to establish a trawl gear closure in the PIHCZ, to protect blue king crab (60 FR 4110, January 20, 1995). The PIHCZ was established to protect a majority of the crab habitat in the Pribilof Islands area based on the distribution and habitat of the blue king crab in the NMFS annual trawl surveys and on observer data.

The BSAI FMP and implementing regulations at § 679.21 require that the incidental catch of PIBKC as a prohibited species must be avoided while fishing for groundfish. When PIBKC is caught in groundfish fisheries, it is known as bycatch and must be immediately returned to sea with a minimum of injury. In addition, regulations at § 679.7 prohibit PIBKC bycatch in groundfish fisheries from being sold or kept for personal use.

On September 23, 2002, the Secretary of Commerce notified the Council that the PIBKC stock biomass was below its minimum stock size threshold and was overfished. Rebuilding overfished stocks is required by section 304 the Magnuson-Stevens Act. A rebuilding plan was implemented in 2004 that included a provision that prohibited directed fishing on PIBKC until the stock was rebuilt (69 FR 17651, April 5, Start Printed Page 494892004). This Federal regulatory prohibition mirrored the directed fishing closure already established by ADF&G in 1999. The rebuilding plan estimated that the stock had a 50 percent probability to be rebuilt within 10 years, by 2014, in compliance with section 304(e)(4)(A)(ii) of the Magnuson-Stevens Act.

Due to chronic low abundance, this stock remains overfished despite the measures to minimize catch of blue king crab. The cause of the continued low PIBKC stock abundance and failure to recover is not well understood. Information included in the EA (see ADDRESSES) and Stock Assessment and Fishery Evaluation (SAFE) reports suggest that environmental conditions such as changing ocean currents, changing water temperatures, and changing spatial distributions among king crab stocks may contribute to the failure of this stock to recover. While there are no apparent physical barriers to adult dispersal, crab larval dispersal may be affected by local oceanography, which may in turn affect recruitment of the PIBKC stock (see Table 4-4 of the EA). Environmental conditions may also play a role in female crab reproduction and growth; however this relationship is poorly understood (Section 5 of the EA).

NMFS notified the Council on September 29, 2009, that the current rebuilding plan for PIBKC was not achieving adequate progress to rebuild the stock by 2014. To comply with section 304(e)(7) of the Magnuson-Stevens Act, the Council recommended further conservation and management measures in Amendment 103 to reduce bycatch in groundfish fisheries: the primary source of fishing mortality for PIBKC. The Council also recommended Amendment 43 to revise to the rebuilding plan in the Crab FMP.

Proposed Amendment 103 to the BSAI FMP

Amendment 103 would be consistent with National Standard 1 by preventing overfishing of PIBKC while allowing the Pacific cod pot allocation to be fully harvested in the BSAI. Bycatch of PIBKC in all groundfish fisheries is below the PIBKC overfishing level; however, groundfish fisheries catch of PIBKC has the potential to exceed the annual PIBKC overfishing level. Therefore, the Council recommended additional conservation and management measures to further minimize bycatch and prevent overfishing with the goal to rebuild PIBKC.

Amendment 103 would also be consistent with National Standard 9 by minimizing bycatch to the extent practicable. The Council recommended closing the PIHCZ to directed fishing for Pacific cod with pot gear based primarily on the high observed rate of PIBKC bycatch in the PIHCZ relative to areas outside of the PIHCZ, and the high observed rate of PIBKC bycatch within the PIHCZ in the directed Pacific cod pot gear fishery relative to other groundfish fisheries occurring within the PIHCZ.

The RIR/IRFA prepared for this action indicates that under Amendment 103 the catch of Pacific cod by pot gear would not be reduced, and the Pacific cod pot fisheries would be able to fully harvest their annual allocation. The RIR/IRFA suggests that fairly high Pacific cod catch by vessels using pot gear that occurs within the PIHCZ could be effectively harvested outside of the boundary of the PIHCZ with limited potential for additional costs on the affected fishery participants. (See Section 1.4.2 of the RIR/IRFA for additional detail). 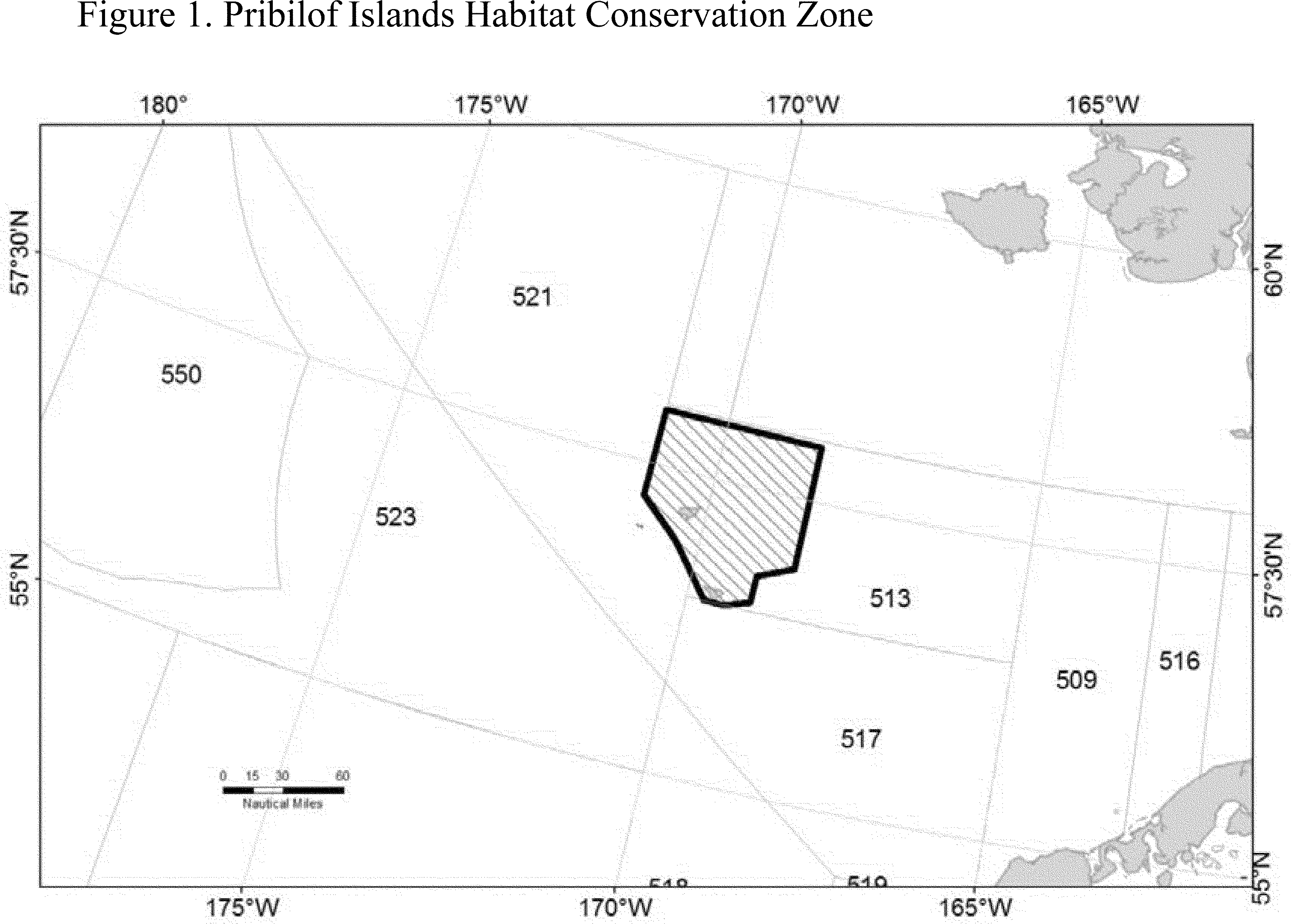 Proposed Amendment 43 to the Crab FMP

The current rebuilding plan in the Crab FMP for PIBKC describes measures taken to reduce mortality to PIBKC to support rebuilding the stock, including actions taken under the BSAI FMP. With the implementation of Amendment 103 to the BSAI FMP, all fishery management measures practicable have been taken to greatly eliminate PIBKC catch and protect PIBKC habitat. These measures are intended to ensure that the rebuilding time period is as short as possible in compliance with section 304(e)(4)(A) of the Magnuson-Stevens Act. Amendment 43 to the Crab FMP would amend the current rebuilding plan and incorporate the new information available on the rebuilding time period that takes into account the status and biology of PIBKC and environmental conditions.

Based on the best available information on the biology of the stock and environmental conditions, NMFS estimates that the time period to rebuild the stock will exceed 10 years, as allowed under section 304(e)(4)(A)(ii) of the Magnuson-Stevens Act (see Section 4.5.2 of the EA for more information). The causes of the stock decline are thought to be predominantly due to environmental changes that inhibit blue king crab reproduction. For this stock to rebuild, the stock would likely require multiple years of above average recruitment and/or a change in environmental conditions to increase larval productivity around the Pribilof Islands. It is not possible to predict future recruitment success; however, changes in stock abundance are assessed annually in the SAFE report.

NMFS developed a draft stock assessment model that predicted that the PIBKC stock may be rebuilt in 50 years. However, NMFS does not have confidence in these model results. The low numbers of PIBKC encountered in biomass surveys and the poor ability to predict recruitment results in high imprecision in the projected biomass. The model imprecision, coupled with poorly understood environmental influences on the blue king crab stock, did not lead to high confidence in biomass projections during the 50-year period. As a result, NMFS is unable to predict whether the PIBKC stock can be rebuilt in the foreseeable future.

In addition, the draft model results showed no statistically significant difference in the rebuilding timeframe under any of the bycatch reduction scenarios. While NMFS could not determine whether reducing bycatch would alter rebuilding timeframes using the stock assessment model, NMFS and the Council are proposing Amendment 103 and the proposed rule to further minimize bycatch.