The following is a copy of a letter to the Speaker of the House of Representatives, Transmittal 15-33 with attached Policy Justification and Sensitivity of Technology. 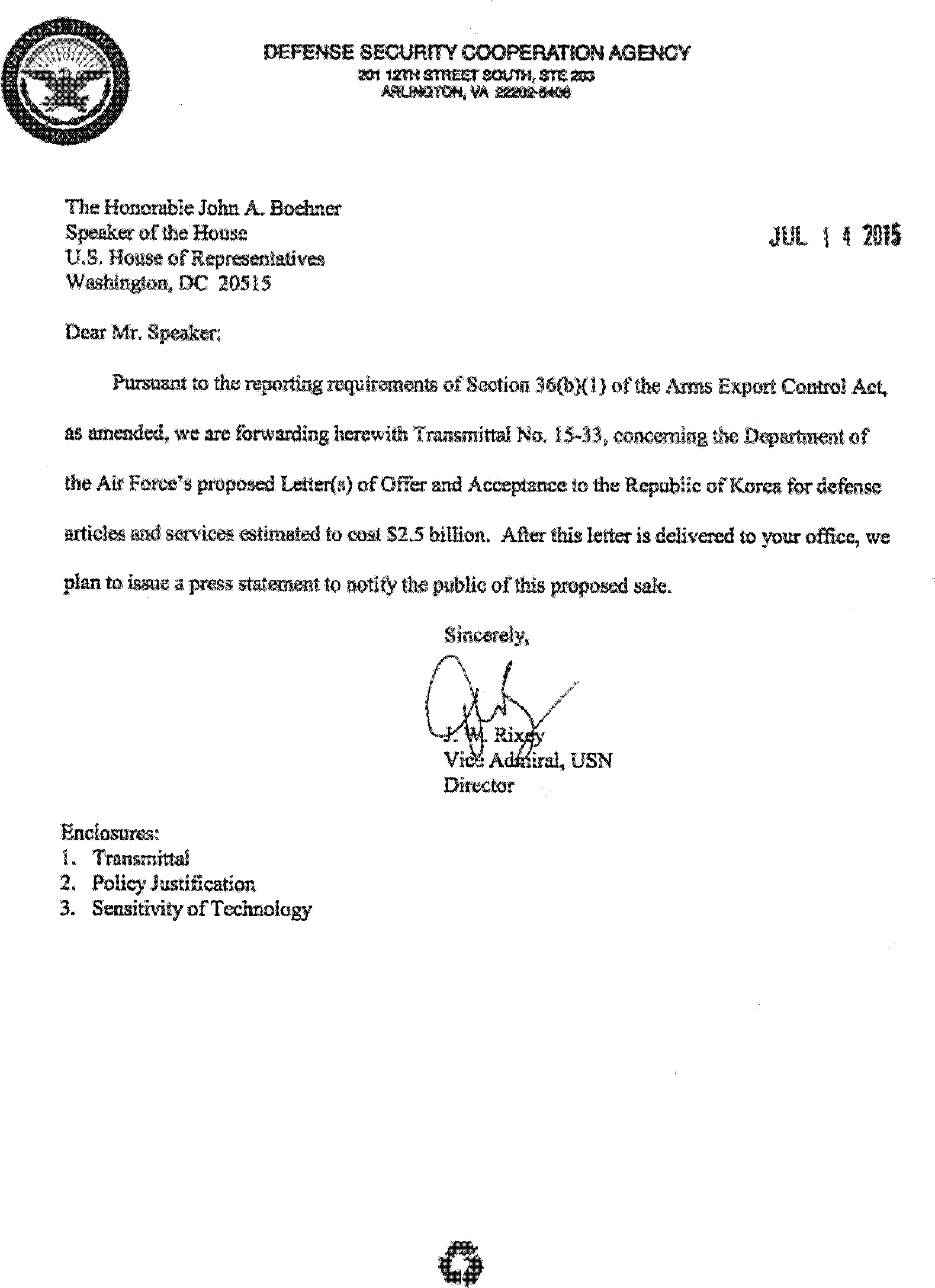 Notice of Proposed Issuance of Letter of Offer Pursuant to Section 36(b)(1) of the Arms Export Control Act, as amended

(v) Prior Related Cases, if any:

*As defined in Section 47(6) of the Arms Export Control Act.

This proposed sale will contribute to the foreign policy and national security objectives of the United States by meeting the legitimate security and defense needs of an ally and partner nation. The ROK is one of the major political and economic powers in East Asia and the Western Pacific and a key partner of the United States in ensuring peace and stability in that region. It is vital to the U.S. national interest to assist our Korean ally in developing and maintaining a strong and ready self-defense capability. The KF-16 Upgrade Program ensures interoperability and continued relations between the ROK and the U.S. Government for the foreseeable future.

The ROK Air Force is modernizing its KF-16 fleet to better support its air defense needs. This upgrade allows the ROK to protect and maintain critical airspace and provide a powerful defensive and offensive capability to preserve the security of the Korean peninsula and its vital national assets.The ROK will have no difficulty absorbing this additional equipment and support into its armed forces.

The proposed sale of this support will not alter the basic military balance in the region.

Implementation of this proposed sale requires travel of approximately 2 U.S. Government personnel on a permanent basis (potentially until contract completion) for program technical support and management oversight. This program also requires contractor personnel to travel to the ROK to meet similar requirements. The exact number of personnel will be defined during the contract negotiation.

There is no adverse impact on U.S. defense readiness as a result of this proposed sale.

1. This sale involves the release of sensitive technology to Korea. The ROK has operated the KF-16 aircraft since 1994. This upgrade provides an updated platform of that same basic capability.

5. The Modular Mission Computer (MMC) is the central aircraft computer of the F-16. It serves as the hub for all aircraft subsystems and avionics data transfer. The hardware and software are classified Secret.

6. The LN-260 Embedded GPS-INS is a sensor that combines GPS and inertial sensor inputs to provide accurate location information for navigation and targeting. The EGI LN-260 is Unclassified. The GPS cryptovariable keys needed for highest GPS accuracy are classified up to Secret.

7. The AN/ALR-69A Digital Radar Warning Receiver (RWR) is the latest in RWR technology, designed to detect incoming radar signals, identify and characterize those signals to a specific threat, and alert the aircrew through the RWR System display. The system consists of external antennae mounted on the fuselage and wingtips. The ALR-69A is based on a digitally-controlled, 16 channel broadband receiver that scans within a specific frequency spectrum and is capable of adjusting to threat changes by modifications to the software. In Country Reprogramming RWR capability will not be provided as part of this export. Hardware is Unclassified. Software is Secret. Technical data and documentation to be provided is Secret.

8. The Joint Helmet Mounted Cueing System (JHMCS) II is a modified HGU-55/P helmet that incorporates a visor-projected Heads-Up Display (HUD) to cue weapons and aircraft sensors to air and ground targets. This system projects visual targeting and aircraft performance information on the back of the helmet's visor, enabling the pilot to monitor this information without interrupting his field of view through the cockpit canopy. This provides improvement for close combat targeting and engagement. Hardware is Unclassified.

9. The Joint Mission Planning System (JMPS) is a multi-platform PC based mission planning system. JMPS hardware is Unclassified and the software is classified up to Secret.

10. The GBU-31(v)1/31(v)3/38 are 2000lbs and 500lbs Joint Direct Attack Munition (JDAM) weapons respectively, with a guidance tail kit that converts unguided free-fall bombs into accurate, adverse weather “smart” munitions. The GBU-31(v)1 utilizes a MK-84 bomb body and the (v)3 utilizes a BLU-109 bomb body. With the addition of a new tail section that contains an inertial navigational system and a global positioning system guidance control unit, JDAM improves the accuracy of unguided, general-purpose bombs in any weather condition. JDAM can be launched from very low to very high altitudes in a dive, toss and loft, or in straight and level flight with an on-axis or off-axis delivery. The JDAM enables multiple weapons to be directed against single or multiple targets on a single pass. The JDAM AUR (All Up Round) and all of its components are Unclassified, technical data for JDAM is classified up to Secret.

11. The GBU-54/56 are 500lbs/2000lbs dual mode laser and GPS guided JDAMs respectively. The GBU-54/56 contains a DSU-40 Laser Sensor that uses both Global Position System aided inertial navigations and/or Laser guidance to execute threat targets. The Laser sensor enhances the standard JDAM's reactive target capability by allowing rapid prosecution of fixed targets with large initial target location errors (TLE). The DSU-40 Laser sensor also provides the additional capability to engage mobile targets moving up to 70 mph. The DSU-40 Laser sensor is a strap down (non-gimbaled) sensor that attaches to the Mk-84 or Blu-117 bomb body in the forward fuze well. Information revealing target designation tactics and associated aircraft maneuvers, the probability of destroying specific/peculiar targets, vulnerabilities regarding countermeasures and the electromagnetic environment is classified Secret. Information revealing the probability of destroying common/unspecified targets, the number of simultaneous lasers the laser seeker head can discriminate, and data on the radar/infra-red frequency is classified Confidential.

12. The GBU-39 Small Diameter Bomb (SDB) is a 250lb class weapon designed as a small autonomous, conventional, air-to-ground, precision glide weapon able to strike fixed and stationary re-locatable targets from standoff range. The SDB weapon system consists of the GBU-39 weapon and the BRU-61/A carriage system. The SDB uses tightly coupled Anti-Jam GPS aided INS for guidance to the coordinates of a stationary target. The warhead is a very effective multipurpose penetrating and blast fragmentation warhead. A proximity sensor provides a height of burst capability. The hardware and software are classified Secret.

13. The BRU-61/A carriage system consists of a four-place rack with a self-contained pneumatic charging and accumulator section designed to carry the GBU-39 SDB. Four ejector assemblies hold the individual weapons. Internal avionics and wire harnesses connect the carriage system to the aircraft and to the individual weapons. The carriage avionics assembly provides the interface between the individual stores and the aircraft for targeting, GPS keys, alignment, fuze settings, and weapon release sequence information. The hardware is Unclassified.

14. The MK-82/84 are 500lbs/2000lbs general purpose bombs respectively designed to attack soft and intermediately protected targets. The destruction mechanism is blast and fragmentation. The weapons are Unclassified.

15. The Joint Programmable Fuze (JPF) FMU-152 is a multi-delay, multi-arm and proximity sensor compatible with general purpose blast, frag and hardened-target penetrator weapons. The JPF settings are cockpit selectable in flight when used with JDAM weapons. The JPF hardware is Unclassified.

16. CBU-105D/B Sensor Fused Weapon (SFW) is an advanced 1,000 lb class cluster bomb munition containing sensor fused sub-munitions that are designed to attack and defeat a wide range of moving or stationary land and maritime threats with minimal collateral damage. The SFW is currently the only combat proven, clean battle weapon that meets U.S. policy regarding cluster munition safety standards. The CBU-105 major components include the SUU-66 Tactical Munitions Dispenser (TMD), ten (10) BLU-108 sub-munitions, each with four (4) “hockey puck” shaped skeet infrared sensing projectiles for a total of forty (40) warheads. The munition is delivered in its All-Up-Round (AUR) configuration. This configuration is Unclassified. No access to the CBU-105 in other than its AUR configuration is anticipated. Although very difficult to open, access to the sub-munitions, and technical data are classified up to Secret.

17. The TGM-65G Maverick is the inert/training version of an air-to-ground missile. The hardware is Unclassified, but has an overall classification of Secret. The Secret aspects of the Maverick system are tactics, information revealing its vulnerability to countermeasures, and counter-countermeasures. Manuals and technical documents that are necessary for operational use and organizational maintenance have portions that are classified Confidential. Performance and operating logic of the countermeasures circuits are Secret.

18. The AGM-84 Harpoon missile is an air-launched, anti-ship, 75nm range, sea skimming, “fire and forget” missile with auto-pilot navigation and multiple waypoint capability. Harpoon Block I terminal guidance is provided by a radar Start Printed Page 43072seeker with a selectable attack profile. The Harpoon Block II upgrade incorporates software and hardware changes that will add an improved Anti-Surface Warfare (ASUW) capability against ships in the open ocean and in the littoral. Harpoon Block II hardware improvements include a new Guidance Control Unit (GCU) that uses GPS aided inertial navigation. This improves the missile's overall navigation accuracy. GPS accuracy also gives Harpoon Block II an inherent secondary role against land-based targets, making Block II useful in coastal target suppression roles. Harpoon Block II software improvements includes changes to the launching system that provides the operator with the ability to superimpose a geographic coastline on the mission planning screen. This allows the user to shape the search pattern of the Harpoon seeker in ASUW mode, enhancing its performance in littoral areas. The information on the Harpoon is classified Secret.

19. The AIM-9X-2 Sidewinder missile is a 5th generation air-to-air guided missile that employs a passive infrared (IR) target acquisition system that features digital technology and micro-miniature solid-state electronics. The AIM-9X-2 AUR is Confidential, major components and subsystems range from Unclassified to Confidential, and technical data and other documentation are classified up to Secret.

20. If a technologically advanced adversary obtained knowledge of the specific hardware or software in the proposed sale, the information could be used to develop countermeasures which might reduce weapons system effectiveness or be used in the development of a system with similar or advanced capabilities.

21. A determination has been made that the recipient country can provide the same degree of protection for the sensitive technology being released as the U.S. Government. This sale is necessary in furtherance of the U.S. foreign policy and national security objectives outlined in the Policy Justification. Moreover, the benefits to be derived from this sale, as outlined in the Policy Justification, outweigh the potential damage that could result if the sensitive technology were revealed to unauthorized persons.

22. All defense articles and services listed in this transmittal have been authorized for release and export to the Government of Korea.