NMFS proposes to allow large federally permitted U.S. longline vessels to fish in certain areas of the Large Vessel Prohibited Area (LVPA) around Swains Island, Tutuila, and the Manua Islands. NMFS would continue to prohibit fishing in the LVPA by large purse seine vessels. The fishing requirements for the Rose Atoll Marine National Monument would remain unchanged. The intent of the proposed rule is to improve the viability of the American Samoa longline fishery and achieve optimum yield from the fishery while preventing overfishing, in accordance with National Standard 1.

You may submit comments on this document, identified by NOAA-NMFS-2015-0080, by either of the following methods:

Instructions: Comments sent by any other method, to any other address or individual, or received after the end of the comment period, may not be considered by NMFS. All comments received are a part of the public record and will generally be posted for public viewing on www.regulations.gov without change. All personal identifying information (e.g., name, address, etc.), confidential business information, or otherwise sensitive information submitted voluntarily by the sender will be publicly accessible.

In 2002, the Council recommended establishing, and NMFS implemented, the LVPA around Swain's, Tutuila, and the Manua Islands, and Rose Atoll. At the time, the Council and NMFS established the LVPA to prevent the potential for gear conflicts and catch competition between large and small fishing vessels. Such conflicts and competition could have led to reduced opportunities for sustained participation in the small-scale pelagic fisheries. The LVPA, which extends seaward approximately Start Printed Page 5152830-50 nm offshore from the islands, restricts vessels 50 ft and longer from fishing for pelagic management unit species. You may read more about the establishment of the LVPA in the 2001 proposed rule (66 FR 39475, July 31, 2001) and 2002 final rule (67 FR 4369, January 30, 2002).

The American Samoa pelagic fisheries have changed since 2002, and the conditions that led the Council and NMFS to establish the LVPA are no longer present. Only a few small longline vessels (just one active in 2014) have been operating on a regular basis, and the large vessels (19 active in 2014) have faced declining catch per unit of effort (CPUE), increased costs, and greatly reduced revenues. The LVPA may be unnecessarily reducing the efficiency of the larger American Samoa longline vessels by displacing the fleet from a part of their historical fishing grounds.

To address fishery conditions resulting from the LVPA, the Council recommended that NMFS allow federally-permitted U.S. longline vessels 50 ft and longer to fish in portions of the LVPA. Specifically, the proposed action would allow large U.S. vessels that hold a Federal American Samoa longline limited entry permit to fish within the LVPA seaward of 12 nm around Swains Island, Tutuila, and the Manua Islands (see Fig. 1). NMFS would continue to prohibit fishing in the LVPA by large purse seine vessels. The fishing requirements for the Rose Atoll Marine National Monument would also remain unchanged. 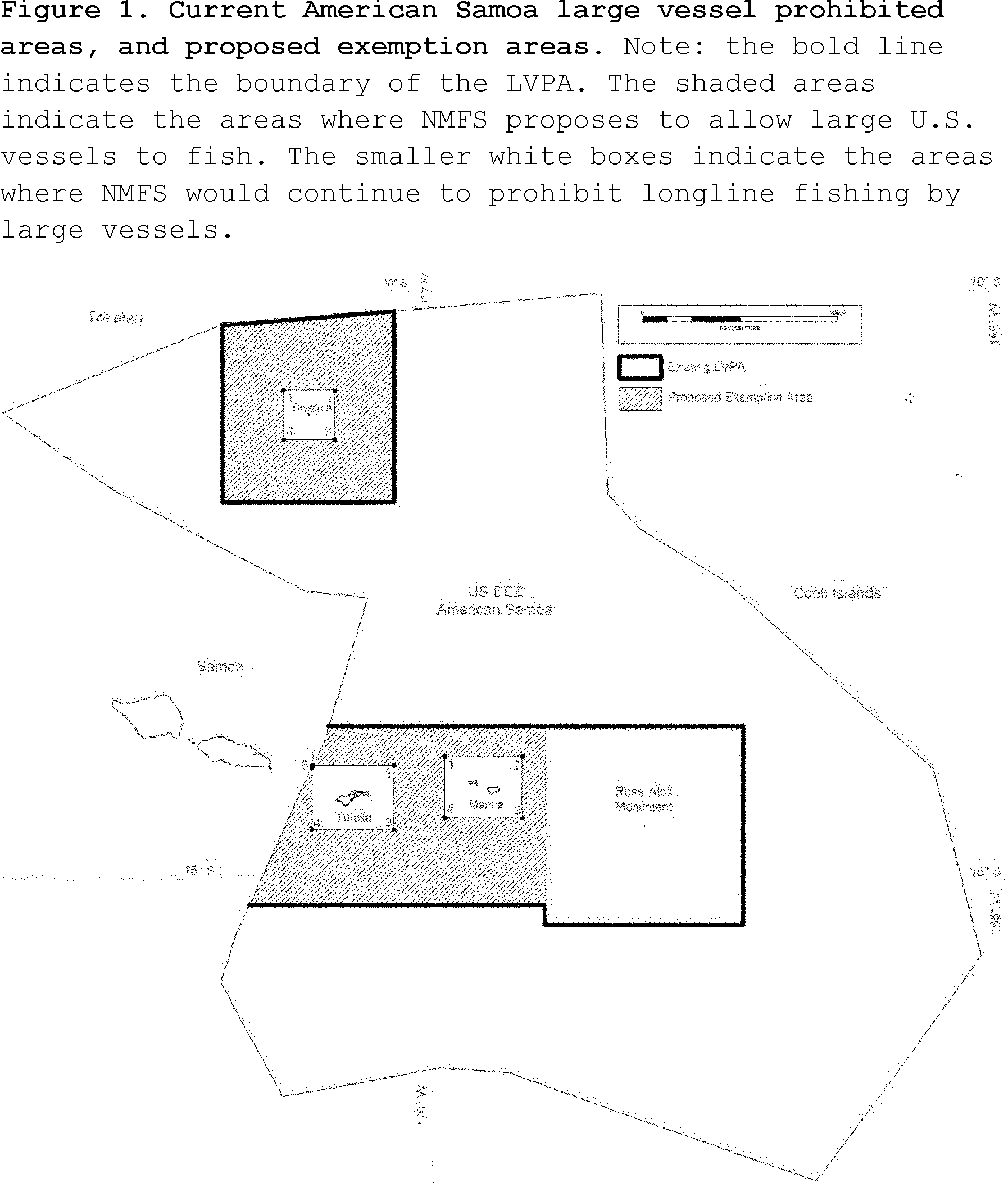 The proposed action would allow fishing in an additional 16,817 nm2 of Federal waters, thereby reducing the total portion of the U.S. Exclusive Economic Zone around American Samoa that is now closed to large longline vessels from 25.5 percent to 11.3 percent. The proposed action is intended to improve the efficiency and economic viability of the American Samoa longline fleet, while ensuring that fishing by the longline and small vessel fleets remains sustainable on an ongoing basis. The proposed action would allow large longline vessels to distribute fishing effort over a larger area, which may reduce catch competition among the larger vessels and promote economic efficiency by reducing transit costs. The longline fishery targets albacore, so it does not compete with small-scale bottomfish fishermen or trollers, who target skipjack and yellowfin tunas and billfish. NMFS would continue to prohibit fishing by large longline vessels within the EEZ from 3-12 nm around the islands, thus maintaining non-competitive fishing opportunities for the small-vessel longline fleet.

The Council and NMFS will annually review the effects of the proposed action on catch rates, small vessel participation, and sustainable fisheries development initiatives. Any proposed changes would be subject to additional environmental review and opportunity for public review and comment.

Regulatory Flexibility Act: Certification of Finding of No Significant Impact on Substantial Number of Small Entities

The Chief Counsel for Regulation of the Department of Commerce certified to the Chief Counsel for Advocacy of the Small Business Administration that this proposed rule, if adopted, would not have a significant economic impact on a substantial number of small entities. A description of the proposed action, why it is being considered, and the legal basis for it are contained in the preamble to this proposed rule.

The Western Pacific Fishery Management Council (Council) established the American Samoa large vessel prohibited areas (LVPA) to separate large-vessel (50 feet or greater) fishing activities from those of smaller vessels, and to prevent potential gear conflicts and catch competition. NMFS implemented the LVPA in 2002 (67 FR 4369; January 30, 2002), with minor modifications to the boundaries in 2012, related to the establishment of the Rose Atoll Marine National Monument (77 FR 34260; June 11, 2012).

At the time that the LVPA was implemented, nearly 40 alia and other small vessels fished alongside 25 large vessels. The establishment of the LVPA prohibited fishing by all but two large vessels. The Council and NMFS allowed the two vessels to fish in the LVPA based on their fishing history. In recent years, far fewer small vessels operate within the LVPA and the U.S. Exclusive Economic Zone (EEZ) surrounding American Samoa. Meanwhile, the large longliners based in American Samoa struggle to maintain operating, with estimated fleet-wide revenue of $6.8 million (http://www.pifsc.noaa.gov/​wpacfin/​as/​Data/​ECL_​Charts/​ae3bmain.htm, accessed July 22, 2015) and some vessels reportedly operating at a loss.

This proposed rule would provide economic relief to the American Samoa large longline vessel fleet, through an exemption to the prohibition from fishing within specific areas of the LVPA. The proposed action would allow the large longline vessels to fish over an additional 16,817 nm2 of Federal waters, thereby reducing the total area of the U.S. EEZ around American Samoa currently closed to large longliners from 25.5 percent to 11.3 percent. The proposed action would improve the efficiency and economic viability of the American Samoa longline fleet, while ensuring fishing by the longline and small vessel fleets remain sustainable on an ongoing basis. The Council and NMFS would annually review the effects of the proposed action on catch rates of all pelagic fishery participants, small vessel participation in pelagic fisheries, and sustainable fisheries development initiatives.

The proposed action would directly affect operators of American Samoa-based longline vessels with Class C or D permits. Based on available information, NMFS has determined that all affected entities are small entities under the SBA definition of a small entity, i.e., they are engaged in the business of fish harvesting, are independently owned or operated, are not dominant in their field of operation, and have gross annual receipts below $20.5 million (NAICS code: 114111). In 2013, NMFS issued 11 Class C permits and 26 Class D permits, with seven active Class C permits and 14 active Class D permits (http://www.pifsc.noaa.gov/​wpacfin/​as/​Data/​Pelagic/​apel24main.htm and http://www.pifsc.noaa.gov/​wpacfin/​as/​Data/​Pelagic/​apel25main.htm, accessed July 22, 2015). Therefore, NMFS estimates that this action would potentially affect up to 37 vessels directly.

NMFS does not expect the rule to have disproportionate economic impacts between large and small entities directly affected by this rule, although the small vessels currently allowed to fish throughout the LVPA may be indirectly affected by the potential increase in the number of large longliners fishing within a portion of the LVPA. Furthermore, there would be disproportionate economic impacts among the universe of vessels based on gear, homeport, or vessel length.

Even though this proposed action would apply to a substantial number of vessels, the implementation of this action will not result in significant adverse economic impacts to individual vessels. The proposed action does not duplicate, overlap, or conflict with other Federal rules and is not expected to have significant impact on small entities (as discussed above), organizations, or government jurisdictions. As such, an initial regulatory flexibility analysis is not required and none has been prepared.

This proposed rule has been determined to be not significant for purposes of Executive Order 12866.

For the reasons set out in the preamble, NMFS proposes to amend 50 CFR part 665 as follows:

PART 665—FISHERIES IN THE WESTERN PACIFIC

1. The authority citation for 50 CFR part 665 continues to read as follows:

(1) An exemption will be issued to a person who currently owns a large vessel to use that vessel to fish for western Pacific pelagic MUS in the American Samoa large vessel prohibited areas, if the person seeking the exemption had been the owner of that vessel when it was registered for use with a Western Pacific general longline permit, and has made at least one landing of western Pacific pelagic MUS in American Samoa on or prior to November 13, 1997.

(2) A landing of western Pacific pelagic MUS for the purpose of this paragraph must have been properly recorded on a NMFS Western Pacific Federal daily longline form that was submitted to NMFS, as required in § 665.14.

(4) An exemption is valid only for the vessel for which it is registered. An exemption not registered for use with a particular vessel may not be used.

(5) An exemption may not be transferred to another person.

(6) If more than one person, e.g., a partnership or corporation, owned a large vessel when it was registered for use with a Western Pacific general longline permit and made at least one landing of western Pacific pelagic MUS in American Samoa on or prior to November 13, 1997, an exemption issued under this section will be issued to only one person.