Adjusting Imports of Aluminum Into the United States

Adjusting Imports of Aluminum Into the United States

1. On January 19, 2018, the Secretary of Commerce (Secretary) transmitted to me a report on his investigation into the effect of imports of aluminum on the national security of the United States under section 232 of the Trade Expansion Act of 1962, as amended (19 U.S.C. 1862).

2. The Secretary found and advised me of his opinion that aluminum is being imported into the United States in such quantities and under such circumstances as to threaten to impair the national security of the United States. The Secretary found that the present quantities of aluminum imports and the circumstances of global excess capacity for producing aluminum are “weakening our internal economy,” leaving the United States “almost totally reliant on foreign producers of primary aluminum” and “at risk of becoming completely reliant on foreign producers of high-purity aluminum that is essential for key military and commercial systems.” Because of these risks, and the risk that the domestic aluminum industry would become “unable to satisfy existing national security needs or respond to a national security emergency that requires a large increase in domestic production,” and taking into account the close relation of the economic welfare of the Nation to our national security, see 19 U.S.C. 1862(d), the Secretary concluded that the present quantities and circumstances of aluminum imports threaten to impair the national security as defined in section 232 of the Trade Expansion Act of 1962, as amended.

3. In light of this conclusion, the Secretary recommended actions to adjust the imports of aluminum so that such imports will not threaten to impair the national security. Among those recommendations was a global tariff of 7.7 percent on imports of aluminum articles in order to reduce imports to a level that the Secretary assessed would enable domestic aluminum producers to use approximately 80 percent of existing domestic production capacity and thereby achieve long-term economic viability through increased production. The Secretary has also recommended that I authorize him, in response to specific requests from affected domestic parties, to exclude from any adopted import restrictions those aluminum articles for which the Secretary determines there is a lack of sufficient U.S. production capacity of comparable products, or to exclude aluminum articles from such restrictions for specific national security-based considerations.

4. I concur in the Secretary's finding that aluminum articles are being imported into the United States in such quantities and under such circumstances as to threaten to impair the national security of the United States, and I have considered his recommendations.

5. Section 232 of the Trade Expansion Act of 1962, as amended, authorizes the President to adjust the imports of an article and its derivatives that are being imported into the United States in such quantities or under such circumstances as to threaten to impair the national security.

6. Section 604 of the Trade Act of 1974, as amended (19 U.S.C. 2483), authorizes the President to embody in the Harmonized Tariff Schedule of the United States (HTSUS) the substance of acts affecting import treatment, Start Printed Page 11620and actions thereunder, including the removal, modification, continuance, or imposition of any rate of duty or other import restriction.

7. In the exercise of these authorities, I have decided to adjust the imports of aluminum articles by imposing a 10 percent ad valorem tariff on aluminum articles, as defined below, imported from all countries except Canada and Mexico. In my judgment, this tariff is necessary and appropriate in light of the many factors I have considered, including the Secretary's report, updated import and production numbers for 2017, the failure of countries to agree on measures to reduce global excess capacity, the continued high level of imports since the beginning of the year, and special circumstances that exist with respect to Canada and Mexico. This relief will help our domestic aluminum industry to revive idled facilities, open closed smelters and mills, preserve necessary skills by hiring new aluminum workers, and maintain or increase production, which will reduce our Nation's need to rely on foreign producers for aluminum and ensure that domestic producers can continue to supply all the aluminum necessary for critical industries and national defense. Under current circumstances, this tariff is necessary and appropriate to address the threat that imports of aluminum articles pose to the national security.

10. In the meantime, the tariff imposed by this proclamation is an important first step in ensuring the economic viability of our domestic aluminum industry. Without this tariff and satisfactory outcomes in ongoing negotiations with Canada and Mexico, the industry will continue to decline, leaving the United States at risk of becoming reliant on foreign producers of aluminum to meet our national security needs—a situation that is fundamentally inconsistent with the safety and security of the American people. It is my judgment that the tariff imposed by this proclamation is necessary and appropriate to adjust imports of aluminum articles so that such imports will not threaten to impair the national security as defined in section 232 of the Trade Expansion Act of 1962, as amended.Start Printed Page 11621

(3) The Secretary, in consultation with the Secretary of State, the Secretary of the Treasury, the Secretary of Defense, the United States Trade Representative (USTR), the Assistant to the President for National Security Affairs, the Assistant to the President for Economic Policy, and such other senior Executive Branch officials as the Secretary deems appropriate, is hereby authorized to provide relief from the additional duties set forth in clause 2 of this proclamation for any aluminum article determined not to be produced in the United States in a sufficient and reasonably available amount or of a satisfactory quality and is also authorized to provide such relief based upon specific national security considerations. Such relief shall be provided for an aluminum article only after a request for exclusion is made by a directly affected party located in the United States. If the Secretary determines that a particular aluminum article should be excluded, the Secretary shall, upon publishing a notice of such determination in the Federal Register, notify Customs and Border Protection (CBP) of the Department of Homeland Security concerning such article so that it will be excluded from the duties described in clause 2 of this proclamation. The Secretary shall consult with CBP to determine whether the HTSUS provisions created by the Annex to this proclamation should be modified in order to ensure the proper administration of such exclusion, and, if so, shall make such modification to the HTSUS through a notice in the Federal Register.

(5) (a) The modifications to the HTSUS made by the Annex to this proclamation shall be effective with respect to goods entered, or withdrawn from warehouse for consumption, on or after 12:01 a.m. eastern daylight time on March 23, 2018, and shall continue in effect, unless such actions are expressly reduced, modified, or terminated.

(6) Any provision of previous proclamations and Executive Orders that is inconsistent with the actions taken in this proclamation is superseded to the extent of such inconsistency.

IN WITNESS WHEREOF, I have hereunto set my hand this eighth day of March, in the year of our Lord two thousand eighteen, and of the Independence of the United States of America the two hundred and forty-second. 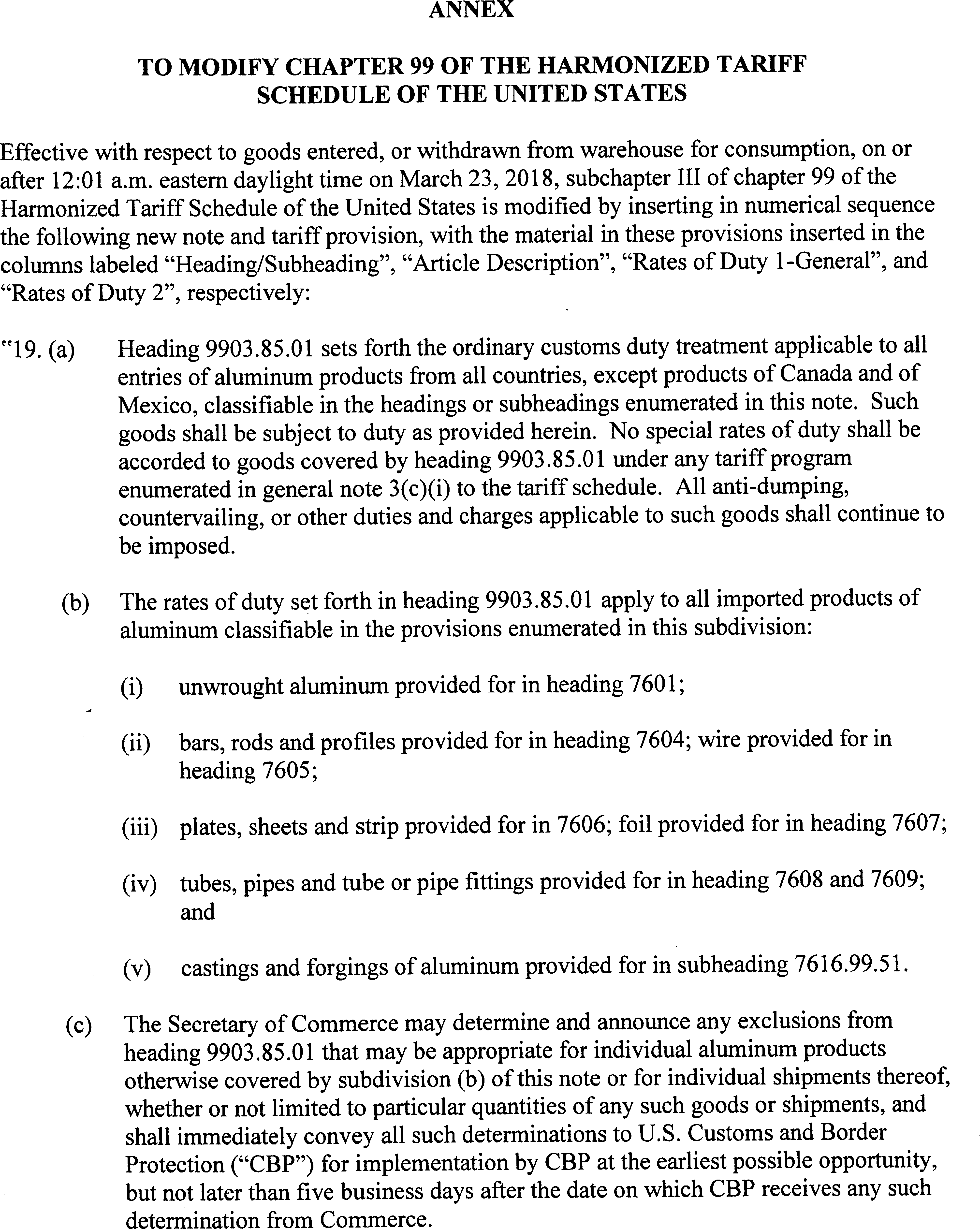 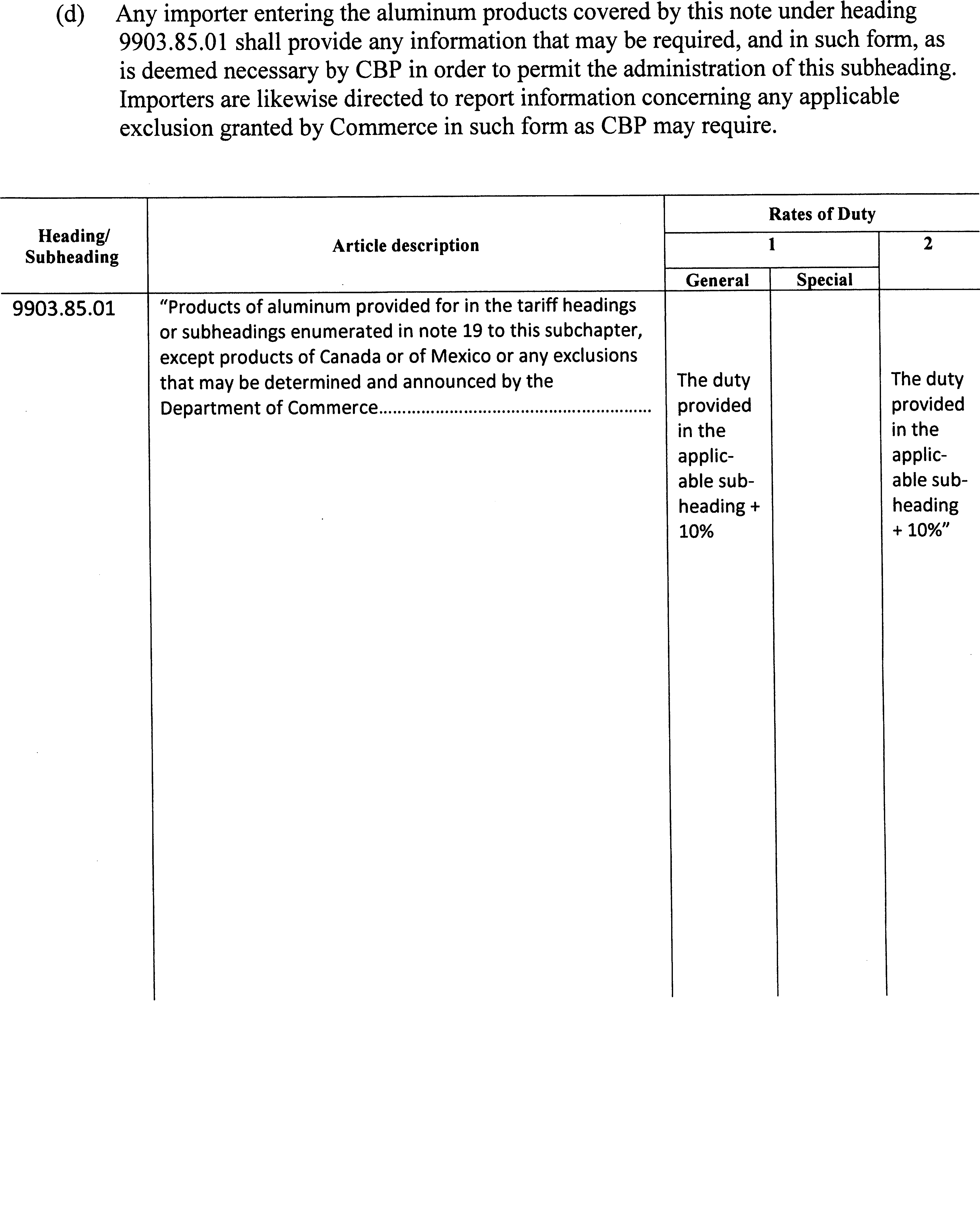