We propose to adopt a new airworthiness directive (AD) for certain Austro Engine GmbH model E4 engines and for all model E4P engines. This proposed AD was prompted by reports of considerable wear on the timing chain on these engines. This proposed AD would require replacement of the timing chain and amending certain airplane flight manuals to limit use of windmill restarts. We are proposing this AD to address the unsafe condition on these products.

You may examine the AD docket on the internet at http://www.regulations.gov by searching for and locating Docket No. FAA-2017-1138; or in person at Docket Operations between 9 a.m. and 5 p.m., Monday through Friday, except Federal holidays. The AD docket contains this NPRM, the mandatory continuing airworthiness information (MCAI), the regulatory evaluation, any comments received, and other information. The street address for Docket Operations (phone: 800-647-5527) is listed above. Comments will be available in the AD docket shortly after receipt.

We invite you to send any written relevant data, views, or arguments about this proposal. Send your comments to an address listed under the ADDRESSES section. Include “Docket No. FAA-2017-1138; Product Identifier 2017-NE-41-AD” at the beginning of your comments. We specifically invite comments on the overall regulatory, economic, environmental, and energy aspects of this NPRM. We will consider all comments received by the closing date and may amend this NPRM because of those comments.

We will post all comments we receive, without change, to http://www.regulations.gov, including any personal information you provide. We will also post a report summarizing each substantive verbal contact we receive about this NPRM.

The European Aviation Safety Agency (EASA), which is the Technical Agent for the Member States of the European Community, has issued EASA AD 2017-0103, dated June 14, 2017 (referred to after this as the MCAI), to correct an unsafe condition for the specified products. The MCAI states:

Considerable wear of the timing chain has been detected on some engines. This may have been caused by windmilling restarts, which are known to cause high stress to the timing chain.

This condition, if not detected and corrected, could lead to failure of the timing chain and consequent engine power loss, possibly resulting in reduced control of the aeroplane.

To address this potential unsafe condition, Austro Engine included instructions in the engine maintenance manual to periodically inspect the condition of the timing chain and, depending on findings, to replace the timing chain and the chain wheel. The operation manual was updated to allow windmilling restart only as an emergency procedure.

You may obtain further information by examining the MCAI in the AD docket on the internet at http://www.regulations.gov by searching for and locating Docket No. FAA-2017-1138.

We reviewed Austro Engine GmbH Mandatory Service Bulletin (MSB) No. MSB-E4-017/2, dated December 2, 2016. The MSB describes procedures for replacement of the timing chain. This service information is reasonably available because the interested parties have access to it through their normal course of business or by the means identified in the ADDRESSES section.

This product has been approved by EASA, and is approved for operation in the United States. Pursuant to our bilateral agreement with the European Community, EASA has notified us of the unsafe condition described in the MCAI and service information referenced above. We are proposing this AD because we evaluated all the relevant information provided by EASA and determined the unsafe condition described previously is likely to exist or develop on other products of the same type design.

This proposed AD would require replacement of the timing chain and amending certain airplane flight manuals to limit use of windmill restarts.

We estimate that this proposed AD affects 211 engines installed on airplanes of U.S. registry.

We estimate the following costs to comply with this proposed AD:Start Printed Page 25411

We are issuing this rulemaking under the authority described in Subtitle VII, Part A, Subpart III, Section 44701: “General requirements.” Under that section, Congress charges the FAA with promoting safe flight of civil aircraft in air commerce by prescribing regulations for practices, methods, and procedures the Administrator finds necessary for safety in air commerce. This regulation is within the scope of that authority because it addresses an unsafe condition that is likely to exist or develop on products identified in this rulemaking action.

This AD is issued in accordance with authority delegated by the Executive Director, Aircraft Certification Service, as authorized by FAA Order 8000.51C. In accordance with that order, issuance of ADs is normally a function of the Compliance and Airworthiness Division, but during this transition period, the Executive Director has delegated the authority to issue ADs applicable to engines, propellers, and associated appliances to the Manager, Engine and Propeller Standards Branch, Policy and Innovation Division.

For the reasons discussed above, I certify this proposed regulation:

(a) Comments Due Date

This AD applies to Austro Engine GmbH model E4 engines with serial numbers that have a “-B” or “-C” configuration and to model E4P engines, all serial numbers.

(1) Determine whether the engine is a Group 1 or Group 2 engine as follows.

(i) A Group 1 engine is an engine equipped with a timing chain that was installed on an engine that experienced a windmill restart, or an engine in which it cannot be determined if the engine experienced any windmilling restarts.

(ii) A Group 2 engine is an engine that is equipped with a timing chain that has not experienced any windmilling restarts.

(2) For Group 1 engines: Before the affected timing chain exceeds 945 engine flight hours (EFHs) since installation on an engine, or within 110 EFHs after the effective date of this AD, whichever occurs later, replace the timing chain in accordance with the instructions in Technical Details, Paragraph 2, in Austro Engine Mandatory Service Bulletin (MSB) No. MSB-E4-017/2, dated December 2, 2016.

(3) For Group 1 and Group 2 engines: After the effective date of this AD, following each windmill restart of an engine, before the timing chain of that engine exceeds 945 EFHs since first installation on an engine, or within 110 EFHs after that windmilling restart, whichever occurs later, replace the timing chain in accordance with the instructions in Technical Details, Paragraph 2, in Austro Engine MSB No. MSB-E4-017/2, dated December 2, 2016.

(4) For Group 1 and Group 2 engines: Within 30 days after the effective date of this AD, amend the applicable Airplane Flight Manual under Emergency Procedures by adding the information in figure 1 to paragraph (g)(4) of this AD to limit the use of a windmilling restart to only an emergency procedure. 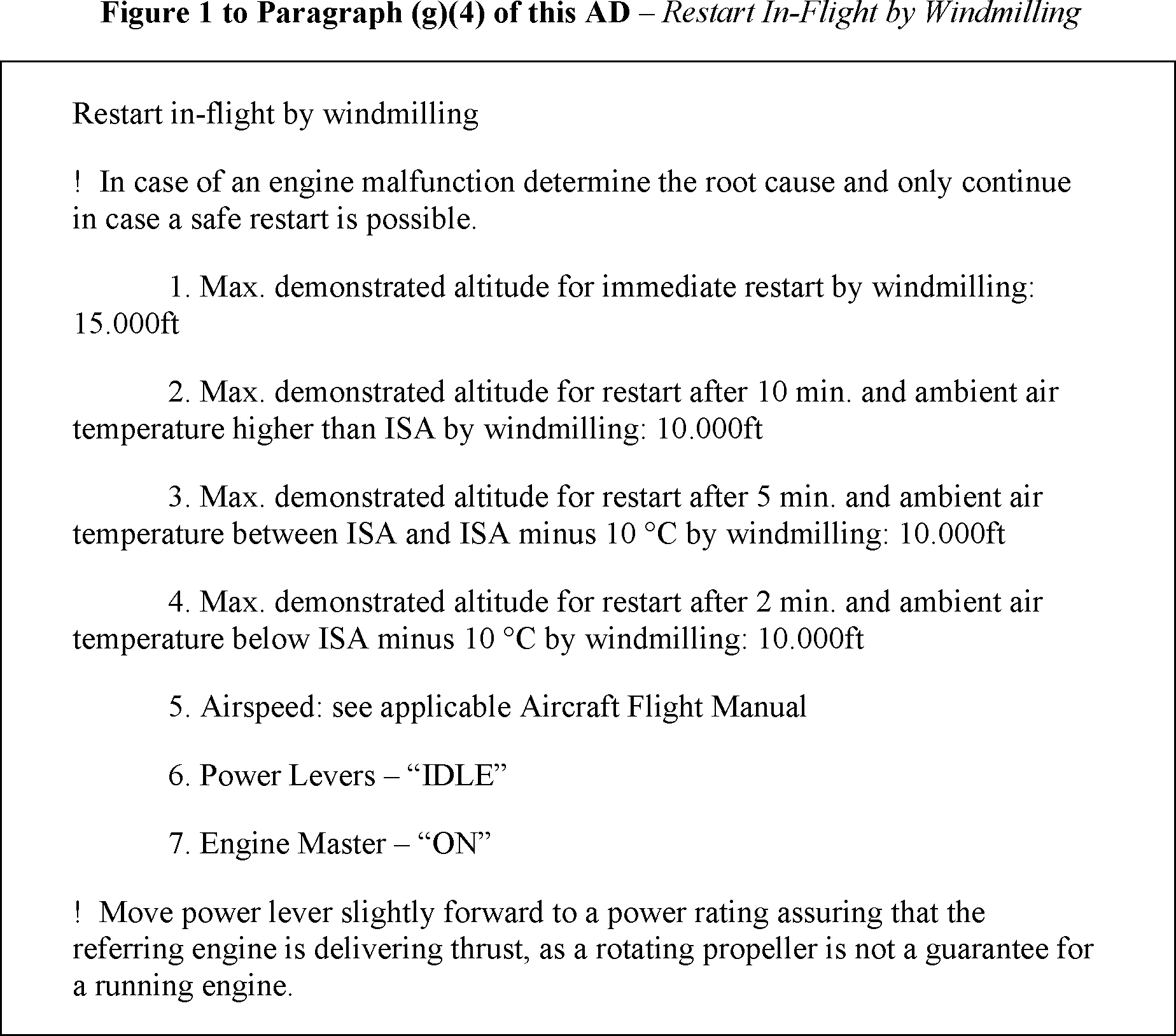 (1) The Manager, ECO Branch, FAA, has the authority to approve AMOCs for this AD, if requested using the procedures found in 14 CFR 39.19. In accordance with 14 CFR 39.19, send your request to your principal inspector or local Flight Standards District Office, as appropriate. If sending information directly to the manager of the ECO Branch, send it to the attention of the person identified in paragraph (i)(1) of this AD. You may email your request to: ANE-AD-AMOC@faa.gov.