Fisheries of the Caribbean, Gulf of Mexico, and South Atlantic; Coastal Migratory Pelagics Resources in the Gulf of Mexico and Atlantic Region; Amendment 31

The coastal migratory pelagics fishery in the Atlantic region is managed under the FMP and includes cobia, along with king and Spanish mackerel. The FMP was prepared by the Councils and is implemented by NMFS through regulations at 50 CFR part 622 under authority of the Magnuson-Stevens Act.

The majority of Atlantic cobia landings occur in state waters and, despite closures in Federal water in recent years, recreational landings have exceeded the recreational annual catch limit (ACL) and the combined stock ACL. This has resulted in shortened fishing seasons, which have been ineffective at constraining harvest. Following overages of the recreational and combined stock ACLs in 2015 and 2016, Federal waters closures for recreational harvest occurred in both 2016 (June 20) and 2017 (January 24). Additionally, Federal waters were closed to commercial harvest of Atlantic cobia in 2016 (December 5) and 2017 (September 4), because the commercial Start Printed Page 4734ACL was projected to be reached during the fishing year.

Allowable harvest in state waters following the Federal closures varied by time and area. Harvest in state waters during the Federal closures contributed to the overage of the recreational ACL and the combined stock ACL. The South Atlantic Council requested that the Atlantic States Marine Fisheries Commission (ASMFC) consider complementary management measures for Atlantic cobia, as constraining harvest in Federal waters has not prevented the recreational and combined ACLs from being exceeded. The ASMFC consists of 15 Atlantic coastal states that manage and conserve their shared coastal fishery resources.

In April 2018, the ASFMC implemented the Interstate FMP, which established state management for Atlantic cobia with the purpose of improving cobia management in the Atlantic. Each affected state developed an implementation plan that included regulations in their state waters. In addition, the ASMFC is currently amending the Interstate FMP for Atlantic cobia to establish a mechanism for recommending future management measures to NMFS. Upon implementation of Amendment 31, such management measures would need to be implemented in Federal waters through the authority and process defined in the Atlantic Coastal Act.

The Magnuson-Stevens Act requires a council to prepare an FMP for each fishery under its authority that requires conservation and management. Any stocks that are predominately caught in Federal waters and are overfished or subject to overfishing, or likely to become overfished or subject to overfishing, are considered to require conservation and management (50 CFR 600.305(c)(1)). Beyond such stocks, councils may determine that additional stocks require conservation and management. Thus, not every fishery requires Federal management and the NMFS National Standard Guidelines at 50 CFR 600.305(c) provide factors that NMFS and the Councils should consider when considering removal of a stock from an FMP. This analysis is contained in Amendment 31.

Based on this analysis, the Councils and NMFS have determined that Atlantic cobia is no longer in need of conservation and management within the South Atlantic Council's jurisdiction and the stock is eligible for removal from the CMP FMP. The majority of Atlantic group cobia landings are in state waters and the stock is not overfished or undergoing overfishing. Additionally, the CMP FMP has proven ineffective at resolving the primary ongoing user conflict between the recreational fishermen from different states, and it does not currently appear to be capable of promoting a more efficient utilization of the resource. Most significantly, the harvest of Atlantic cobia is adequately managed in state waters by the ASMFC and their Interstate FMP, which was implemented in April 2018. For the commercial sector, the ASMFC's Interstate FMP specified management measures for Atlantic cobia that are consistent with the current ACL and accountability measure (AM) specified in the Federal regulations implemented pursuant to the CMP FMP.

Therefore, NMFS and the Councils have determined that management by the states, in conjunction with the ASMFC and Secretary of Commerce, will be more effective at constraining harvest and preventing overfishing, offering greater biological protection to the stock and decreasing adverse socioeconomic effects to fishermen. Further, management of Atlantic cobia by the ASMFC is expected to promote a more equitable distribution of harvest of the species among the states.

This final rule removes Atlantic cobia from Federal management under the Magnuson-Stevens Act. At the same time, it implements comparable regulations, in Federal waters, under the Atlantic Coastal Act.

The ASMFC's Interstate FMP has specified a recreational harvest limit (RHL) of 613,800 lb (278,415 kg) in state and Federal waters and state-by-state recreational quota shares (harvest targets) of the coastwide RHL. During the development of the Interstate FMP, one percent of the amount of the recreational allocation of the current Federal ACL (initially 6,200 lb (2,812 kg)) was set aside to account for harvests in de minimis states (Maryland, Delaware, and New Jersey). The harvest targets for each state, in both state and Federal waters, are 58,311 lb (26,449 kg) for Georgia, 74,885 lb (33,967 kg) for South Carolina, 236,316 lb (107,191 kg) for North Carolina and 244,292 lb (110,809 kg) for Virginia. Percentage allocations are based on states' Start Printed Page 4735percentages of the coastwide historical landings in numbers of fish.

NMFS received 14 comments on the proposed rule and Amendment 31 from members of the public and fishing associations. Of these comments, two supported the actions in the proposed rule and Amendment 31, with which NMFS agrees. Another comment related to potential future measures in Florida state waters along the east coast, which is unrelated to the Atlantic cobia stock and beyond the scope of the actions contained in Amendment 31. NMFS refers the commenter to the State of Florida for potential future changes to state regulations.

No changes were made to this final rule as a result of public comment.

The Regional Administrator, Southeast Region, NMFS has determined that this final rule is consistent with Amendment 31, the FMP, the Magnuson-Stevens Act, and other applicable laws. Additionally, this final rule is compatible with the effective implementation of the ASMFC's Interstate FMP for Atlantic cobia.

This final rule has been determined to be not significant for purposes of Executive Order 12866. NMFS expects this final rule would reduce regulatory complexity and administrative costs, as well as provide economic benefits to recreational anglers through expanded harvest opportunities in Federal waters and a more stable recreational fishing season for Atlantic cobia.

The Magnuson-Stevens Act and Atlantic Coastal Act provide the statutory basis for this final rule. No duplicative, overlapping, or conflicting Federal rules have been identified. In addition, no new reporting, record-keeping, or other compliance requirements are introduced by this final rule. Accordingly, the Paperwork Reduction Act does not apply to this final rule.

1. The authority citation for part 600 continues to read as follows:

2. In § 600.725, in paragraph (v), in the table under heading “III. South Atlantic Fishery Management Council,” under entry 8, remove and reserve entry 8.C and add entry 25 in numerical order to read as follows:

PART 622—FISHERIES OF THE CARIBBEAN, GULF OF MEXICO, AND SOUTH ATLANTIC

3. The authority citation for part 622 continues to read as follows:

4. In § 622.1, revise the Table 1 entry for “FMP for Coastal Migratory Pelagic Resources”, and add footnote 9 to Table 1 to read as follows:

(2) Cobia, Gulf migratory group. Subject to the prohibitions on gear/methods specified in § 622.9, the following are the only fishing gears that may be used in the Gulf EEZ, and in the South Atlantic EEZ south of a line extending due east from the Florida/Georgia border for cobia—all gear except drift gillnet and long gillnet.

The revision reads as follows:

(1) In the Gulf and in the South Atlantic EEZ south of a line extending due east from the Florida/Georgia border—33 inches (83.8 cm), fork length.

(a) Cobia in or from the Gulf and in the South Atlantic EEZ south of a line extending due east from the Florida/Georgia border, and king mackerel and Spanish mackerel in or from the Gulf, Mid-Atlantic, or South Atlantic EEZ, except as specified for king mackerel and Spanish mackerel in paragraph (b) of this section, must be maintained with head and fins intact. Such fish may be eviscerated, gilled, and scaled, but must otherwise be maintained in a whole condition. The operator of a vessel that fishes in the EEZ is responsible for ensuring that fish on that vessel in the EEZ are maintained intact and, if taken from the EEZ, are maintained intact through offloading ashore, as specified in this section.

The revision reads as follows:

(a) King mackerel and Spanish mackerel * * * 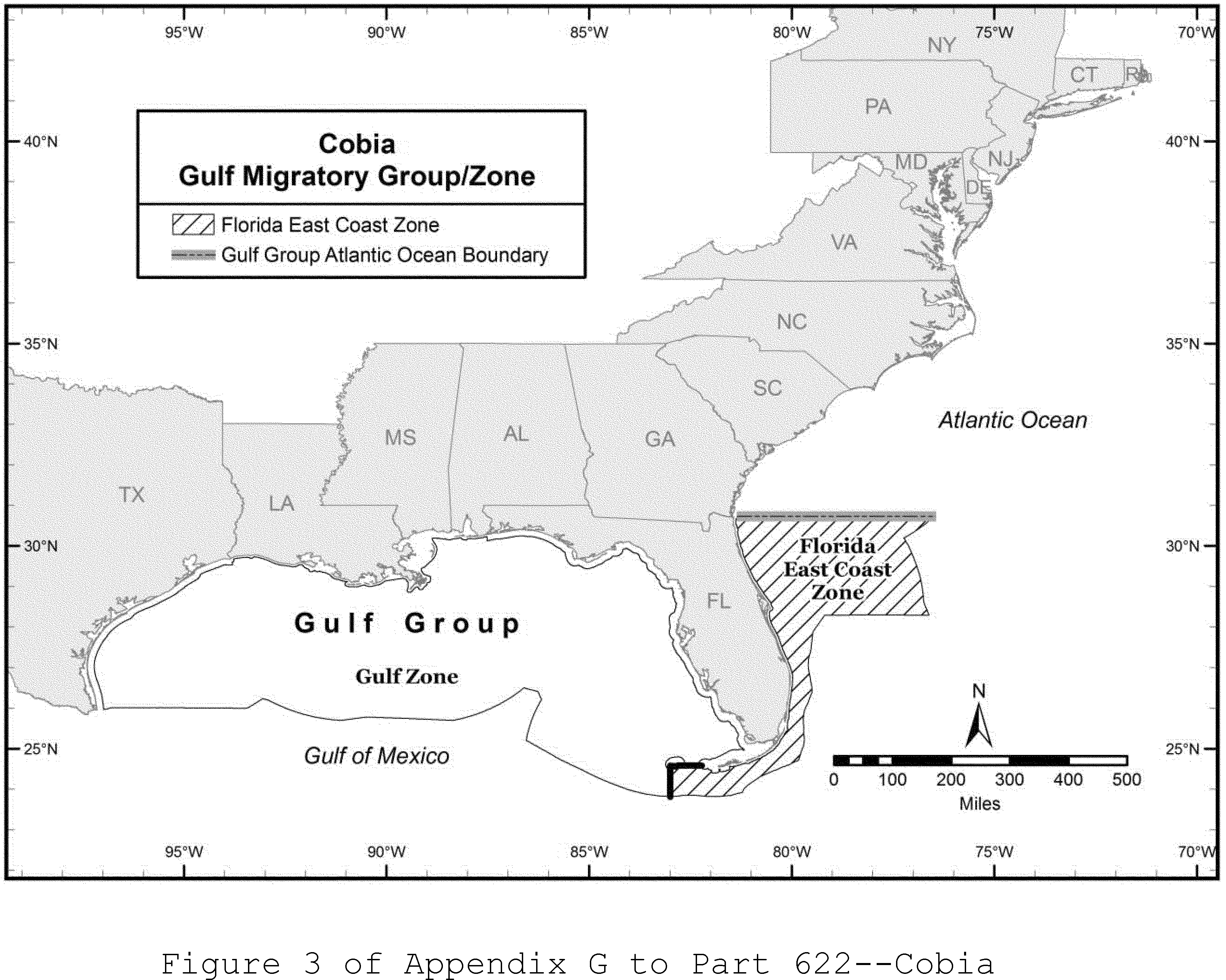 13. The authority citation for part 697 continues to read as follows:

14. In § 697.2, in paragraph (a), add a definition for “Atlantic migratory group cobia” in alphabetical order to read as follows:

(g) Atlantic migratory group cobia. In addition to the prohibitions set forth in § 600.725 of this chapter, it is unlawful for any person to do any of the following:

(4) Fail to maintain a fish intact through offloading ashore, as specified in this part.

(5) Exceed a bag or possession limit, as specified in this part.

(6) Fail to comply with the species-specific limitations, as specified in this part.

(7) Fail to comply with the restrictions that apply after closure of a fishery, sector, or component of a fishery, as specified in this part.

(8) Possess on board a vessel or land, purchase, or sell fish in excess of the commercial trip limits, as specified in this part.

(9) Fail to comply with the restrictions on sale/purchase, as specified in this part.Start Printed Page 4738

(10) Interfere with fishing or obstruct or damage fishing gear or the fishing vessel of another, as specified in this part.

(11) Fail to comply with any other requirement or restriction specified in this part or violate any provision(s) in this part.

(a) Fishing year. The fishing year for Atlantic migratory cobia is January 1 through December 31.

(b) Authorized gear. Subject to the prohibitions on gear/methods in § 697.7, the following are the only fishing gears that may be used for cobia in the EEZ of the Atlantic migratory group—automatic reel, bandit gear, handline, rod and reel, pelagic longline, and spear (including powerheads).

(1) Recreational bag and possession limits. Atlantic migratory group cobia that are not sold (recreational sector)—1, not to exceed 6 fish per vessel per day.

(2) Possession limits. A person who is on a trip that spans more than 24 hours may possess no more than two daily bag limits, provided such trip is on a vessel that is operating as a charter vessel or headboat, the vessel has two licensed operators aboard, and each passenger is issued and has in possession a receipt issued on behalf of the vessel that verifies the length of the trip.

(f) Quotas. All weights are in round and eviscerated weight combined.

(1) Commercial quota. The following quota applies to persons who fish for cobia and sell their catch—50,000 lb (22,680 kg). If the sum of the cobia landings that are sold, as estimated by the SRD, reach or are projected to reach the quota specified in this paragraph (f)(1), the AA will file a notification with the Office of the Federal Register to prohibit the sale and purchase of cobia for the remainder of the fishing year.

(ii) The sale or purchase of Atlantic migratory group cobia in or from the EEZ during a closure is prohibited. The prohibition on the sale or purchase during a closure does not apply to Atlantic migratory group cobia that were harvested, landed ashore, and sold prior to the effective date of the closure and were held in cold storage by a dealer or processor.