The New England Fishery Management Council developed Amendment 8 to the Atlantic Herring Fishery Management Plan to specify a long-term acceptable biological catch control rule for herring and address localized depletion and user group conflict. This amendment would establish an acceptable biological catch control rule that accounts for herring's role in the ecosystem and prohibit midwater trawling in inshore Federal waters from the U.S./Canada border to the Rhode Island/Connecticut border. Amendment 8 is intended to support sustainable management of the herring resource and help ensure that herring is available to minimize possible detrimental biological impacts on predators of herring and associated socioeconomic impacts on other user groups.

Public comments must be received on or before October 21, 2019.

You may submit comments on this document, identified by NOAA-NMFS-2019-0078, by any of the following methods:

3. Enter or attach your comments.

Instructions: Comments sent by any other method, to any other address or individual, or received after the end of the comment period, may not be considered by us. All comments received are a part of the public record and will generally be posted for public viewing on www.regulations.gov without change. All personal identifying information (e.g., name, address, etc.), confidential business information, or otherwise sensitive information submitted voluntarily by the sender will be publicly accessible. We will accept anonymous comments (enter “N/A” in the required fields if you wish to remain anonymous).

Copies of Amendment 8, including the Environmental Impact Statement, the Regulatory Impact Review, and the Initial Regulatory Flexibility Analysis (EIS/RIR/IRFA) prepared in support of this action are available from Thomas A. Nies, Executive Director, New England Fishery Management Council, 50 Water Street, Mill 2, Newburyport, MA 01950. The supporting documents are also accessible via the internet at: http://www.nefmc.org.

The goal of the Atlantic Herring Fishery Management Plan (FMP) is to manage the herring fishery at long-term sustainable levels and objectives of the FMP include providing for full utilization of the optimum yield (OY) and, to the extent practicable, controlled opportunities for participants in other New England and Mid-Atlantic fisheries. The Herring FMP describes OY as the amount of fish that will provide the greatest overall benefit to the Nation, particularly with respect to food production and recreational opportunities, taking into account the protection of marine ecosystems, including maintenance of a biomass that supports the ocean ecosystem, predator consumption of herring, and biologically sustainable human harvest. This includes recognition of the importance of herring as one of many forage species of fish, marine mammals, and birds in the Greater Atlantic Region. Consistent with these aims, the goals for Amendment 8 are to: (1) Account for the role of herring within the ecosystem, Start Printed Page 43574including its role as forage; (2) stabilize the fishery at a level designed to achieve OY; and (3) address localized depletion in inshore waters.

On February 26, 2015 (80 FR 10458), the New England Fishery Management Council (Council) published a notice of intent (NOI) to prepare an EIS for Amendment 8 to consider long-term harvest strategies for herring, including an ABC control rule that addresses the biological and ecological requirements of the herring resource. The importance of herring as a forage species was underscored by the Council's specified intent to consider a wide range of ABC control rule alternatives, including those that explicitly account for herring's role in the ecosystem. The Council held scoping meetings during March and April of 2015 to solicit comments on ABC control rule alternatives.

The Council developed alternatives for a herring ABC control rule using a Management Strategy Evaluation (MSE). MSE is a decision-making tool that uses computer modeling to compare the performance of alternatives (management strategies) under various management scenarios to achieve multiple, competing objectives. The Council held two public workshops to generate stakeholder input to help identify objectives for the MSE analysis. Results of the MSE informed the range of ABC control rule alternatives and impact analysis of those alternatives in Amendment 8.

On May 11, 2018 (83 FR 22060), the Environmental Protection Agency announced the public comment period for the Amendment 8 draft environmental impact statement (DEIS). The 45-day public comment period extended until June 25, 2018. During that time, the Council held public hearings on the DEIS in Rockland and Portland, Maine; Gloucester and Chatham, Massachusetts; Narragansett, Rhode Island; Philadelphia, Pennsylvania; and via webinar. The Council adopted Amendment 8 on September 25, 2018, and submitted the amendment to us for review in 2019.

Amendment 8 would establish a long-term ABC control rule for herring. Under the proposed control rule, when biomass is at or above 50 percent of the biomass associated with maximum sustainable yield (BMSY) or its proxy, ABC is the catch associated with a maximum fishing mortality (F) of 80 percent of FMSY or its proxy. When biomass falls below 50 percent of BMSY or its proxy, F declines linearly to 0 at 10 percent of BMSY or its proxy. The control rule would set ABC for a three-year period but would allow ABC to vary year-to-year in response to projected changes in biomass. The control rule could be revised via a framework adjustment if a quantitative assessment is not available, if projections are producing ABCs that are not justified or consistent with available information, or if the stock requires a rebuilding program.

The proposed control rule is intended to explicitly account for herring as forage in the ecosystem by limiting F to 80 percent of FMSY when biomass is high and setting it at zero when biomass is low. It is also intended to generate an ABC consistent with specific criteria identified by the Council, including low variation in yield, low probability of the stock becoming overfished, low probability of a fishery shutdown, and catch limits set at a relatively high proportion of MSY. The Council anticipates that short-term negative economic impacts on participants in the herring or lobster fisheries, resulting from a reduced herring harvest in response to low herring biomass, may become a long-term economic benefit for industry participants, especially if the proposed control rule results in low variation in yield, low probability of a fishery shutdown, and low probability of overfishing. Relative to other control rules considered by the Council, the proposed control rule is designed to more effectively balance the goal and objectives of the Herring FMP, including managing the fishery at long-term sustainable levels, taking forage for predators into account to support the ocean ecosystem, and providing a biologically sustainable harvest as a source of revenue for fishing communities and bait for the lobster fishery.

Shortly before the Council took final action on Amendment 8, an updated stock assessment concluded that herring biomass is low, and the probability of overfishing and the stock becoming overfished is high. While not directly applicable to a long-term harvest policy, the Council noted that under herring's current condition of low biomass, setting catch more conservatively than status quo may increase the likelihood of stock growth. In turn, this would have positive impacts on the herring fishery, predators, and predator fisheries.

Amendment 8 would also prohibit the use of midwater trawl gear inshore of 12 nautical miles (22 km) from the U.S./Canada border to the Rhode Island/Connecticut border and inshore of 20 nautical miles (37 km) off the east coast of Cape Cod. Specifically, federally permitted vessels would be prohibited from using, deploying, or fishing with midwater trawl gear within the inshore midwater trawl restricted area located shoreward of the 12-nautical mile (22-km) territorial sea boundary from Canada to Connecticut and within thirty-minute squares 114 and 99 off Cape Cod (Figure 1). Midwater trawl vessels would be able to transit the inshore midwater trawl restricted gear area provided gear was stowed and not available for immediate use. The proposed measure would be in addition to the existing prohibition on midwater trawling for herring in Area 1A during June 1 through September 30. 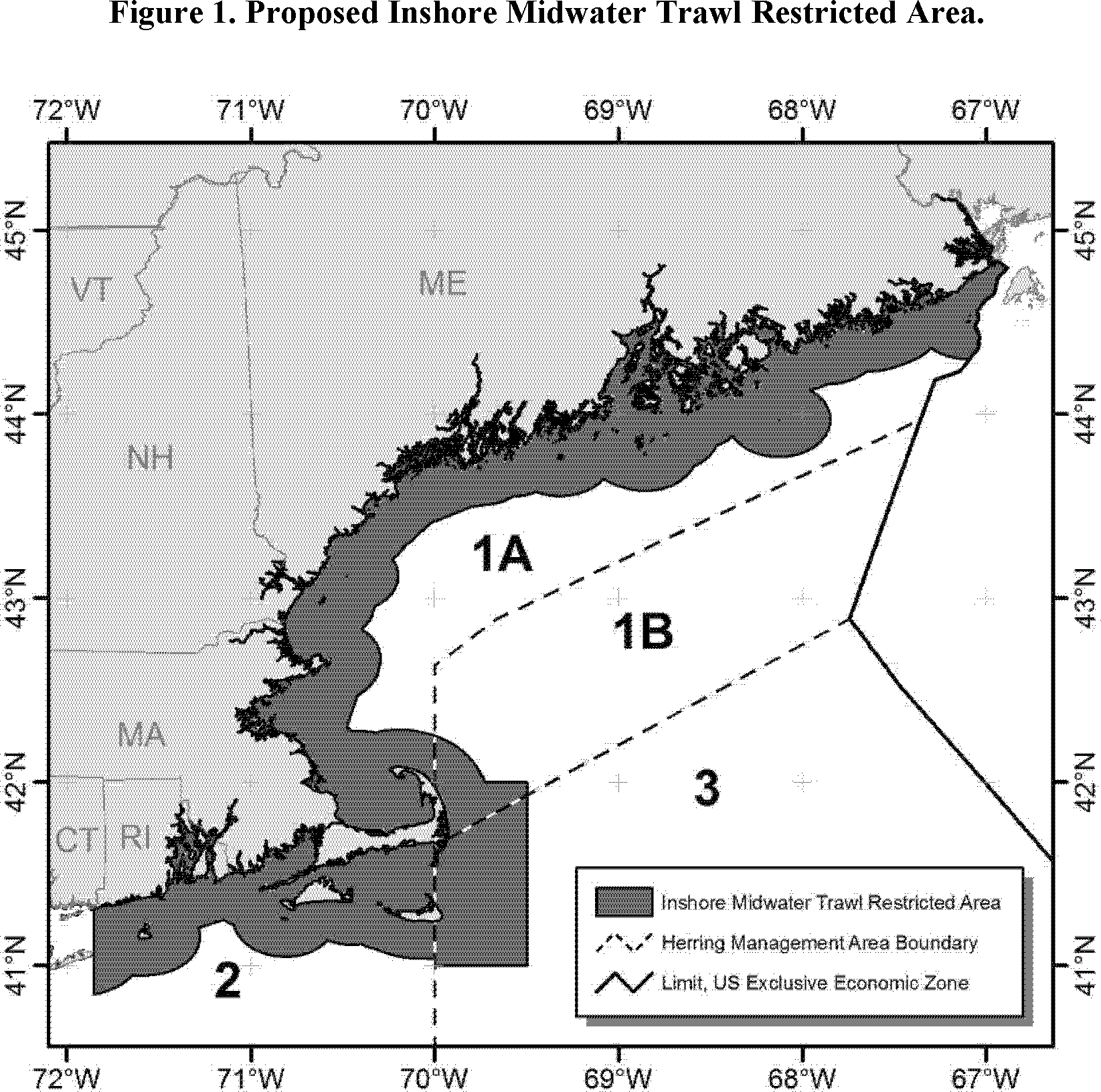 Amendment 8 would allow the inshore midwater trawl restricted area or new closures to address localized depletion and/or user group conflict to be modified or implemented via framework adjustment. The list of framework provisions at § 648.206 already includes closed areas; this amendment would add the inshore midwater trawl restricted area to that list.

The Council's recommendation to prohibit midwater trawling in inshore areas is an allocation decision intended to balance the needs of user groups and provide conservation benefits. Consistent with objectives in the Herring FMP, the proposed measure is intended to facilitate an efficient, fair, and equitable accommodation of social, economic, and ecological factors associated with achieving OY, in part by providing, to the extent practicable, controlled opportunities for participants in other New England and Mid-Atlantic fisheries. Because midwater trawl vessels historically harvested a larger percentage of herring than other gear types and are able to fish offshore, the Council recommended prohibiting them from inshore waters to help ensure herring was available inshore for other user groups and predators of herring. The proposed inshore midwater trawl restricted area is designed to be reasonably large enough to address the overlap between midwater trawl vessels and other user groups and, ultimately, user group conflict in inshore waters. This proposed measure is likely to negatively impact the midwater trawl fleet, with potentially increased trip costs and lower annual catches, but the Council believes that, on balance, the benefits to other user groups, such as potentially reduced trips costs, higher annual catches, and improved safety, outweigh the costs to midwater trawl vessels. The proposed measure may also have biological benefits if moving midwater trawl vessels offshore minimizes catch of river herring and shad, reduces fishing pressure on the inshore component of the herring stock, and helps ensure herring are available to predators. Herring is currently assessed as one stock, but it likely has stock components. Reducing fishing pressure inshore would benefit an inshore stock component. Analyses in Amendment 8 estimate that in recent years approximately 30 percent of the midwater trawl fleet's annualized revenue came from within the proposed inshore midwater trawl restricted area. Negative economic impacts on the midwater trawl fleet may be mitigated if the fleet is able to offset lost revenue from inshore areas with increased revenue from offshore areas. Herring catch limits are currently low, so the fishery has the capacity to harvest the OY. Recent midwater trawl landings (2007-2015) offshore of the proposed midwater trawl restricted area (36,903 mt) are much higher than the Council-recommended OY for 2020 and 2021 (11,621 mt). In the longer-term, the fishery will likely adapt to be able harvest an increased OY, provided vessels are able to locate herring.