The Department of Defense is publishing the unclassified text of an arms sales notification.

This 36(b)(1) arms sales notification is published to fulfill the requirements of section 155 of Public Law 104-164 dated July 21, 1996. The following is a copy of a letter to the Speaker of the House of Representatives, Transmittal 20-08 with attached Policy Justification and Sensitivity of Technology. 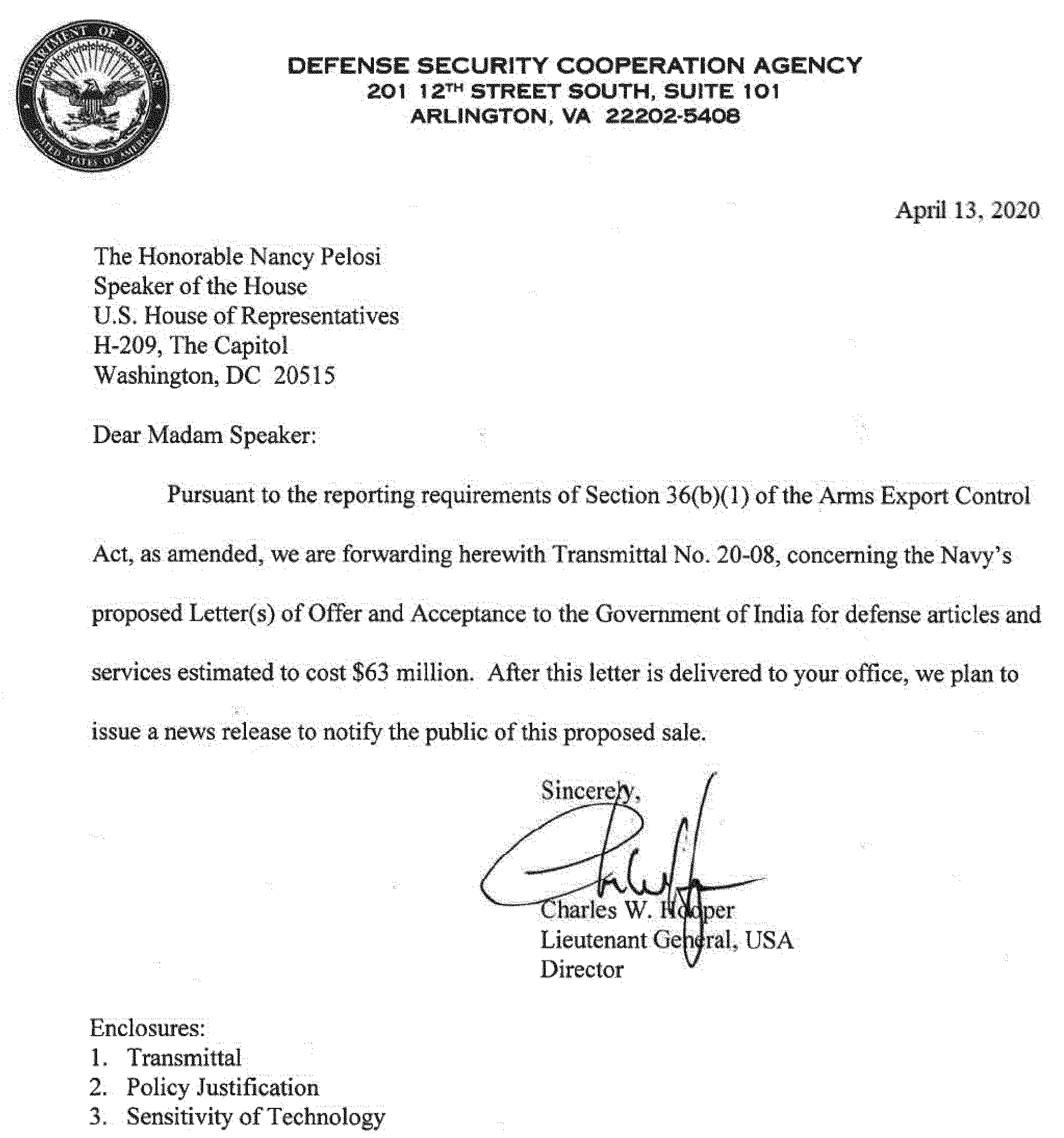 Notice of Proposed Issuance of Letter of Offer Pursuant to Section 36(b)(1) of the Arms Export Control Act, as amended

(i) Prospective Purchaser: Government of India

Sixteen (16) MK 54 All Up Round Lightweight Torpedoes (LWT)

(v) Prior Related Cases, if any: IN-P-AAR

* As defined in Section 47(6) of the Arms Export Control Act.

This proposed sale will support the foreign policy and national security of the United States by helping to strengthen the U.S.-Indian strategic relationship and to improve the security of a major defensive partner, which continues to be an important force for political stability, peace, and economic progress in the Indo-Pacific and South Asia region.

The proposed sale will improve India's capability to meet current and future threats from enemy weapon systems. The MK 54 Lightweight Torpedo will provide the capability to conduct anti-submarine warfare missions. India will use the enhanced capability as a deterrent to regional threats and to strengthen its homeland defense. India intends to utilize MK 54 Lightweight Torpedoes on its P-8I aircraft. India will have no difficulty absorbing these systems into its armed forces.

The principal contractor will be Raytheon Integrated Defense System, Portsmouth, Rhode Island. There are no known offset agreements proposed in connection with this potential sale. Any offset agreement required by India will be defined in negotiations between the purchaser and the contractor(s).

Implementation of this proposed sale will not require the assignment of additional U.S. Government and/or contractor representatives to India; however, U.S. Government Engineering and Technical Services will be required on an interim basis for training and technical assistance.

1. The MK 54 Torpedo is a conventional torpedo that can be launched from surface ships, rotary and fixed wing aircrafts. The MK 54 is an upgrade to the MK 46 Torpedo. The upgrade to the MK 54 entails replacement of the torpedo's sonar and guidance and control systems with modem technology. The new guidance and control system uses a mixture of commercial-off-the-shelf and custom-built electronics. The warhead, fuel tank and propulsion system from the MK 46 torpedo are re-used in the MK 54 configuration with minor modifications. There is no sensitive technology in the MK 54 or its support and test equipment. The assembled MK 54 torpedo and several of its individual components are classified CONFIDENTIAL. The MK 54 operational software is classified as SECRET. The Government of India has not requested nor will it be provided with the source code for the MK 54 operational software.

2. If a technologically advanced adversary were to obtain knowledge of the hardware and software elements, the information could be used to develop countermeasures or equivalent systems which might reduce system effectiveness or be used in the development of a system with similar or advanced capabilities.

3. A determination has been made that India can provide substantially the same degree of protection for the sensitive technology being released as the U.S. Government. This proposed sale is necessary to further the U.S. foreign policy and national security objectives outlined in the Policy Justification.

4. All defense articles and services listed on this transmittal have been authorized for release and export to the Government of India.