Comments must be identified with RINs 2700-AE57 and may be sent to NASA via the Federal E-Rulemaking Portal: http://www.regulations.gov. Follow the online instructions for submitting comments. Please note that NASA will post all comments on the internet with changes, including any personal information provided.

Subpart 1 of part 1221, last amended November 5, 1993 [58 FR 58944], sets forth the policy governing the use of the NASA Seal, the NASA Insignia, NASA Logotype, NASA Program Identifiers, and the NASA Flags. This subpart also establishes and sets forth the concept and scope of the NASA Unified Visual Communications System and prescribes the policy and guidelines for implementation of the system. It is amended to add the NASA Graphics Standards Manual and make other administrative updates.

The National Aeronautics and Space Act (the Space Act), 51 U.S.C. 20113 (a), authorizes the Administrator of NASA to make, promulgate, issue, rescind, and amend rules and regulations governing the manner of its operations and the exercise of the powers vested in it by law.

Executive Orders 13563 and 12866 direct agencies to assess all costs and benefits of available regulatory alternatives and, if regulation is necessary, to select regulatory approaches that maximize net benefits (including potential economic, environmental, public health and safety effects, distributive impacts, and equity). E.O. 13563 emphasizes the importance of quantifying both costs and benefits, of reducing costs, of harmonizing rules, and of promoting flexibility. This rule has been designated as “not significant” under section 3(f) of E.O. 12866.

Review Under the Regulatory Flexibility Act

Review Under the Paperwork Reduction Act

This direct final rule does not contain any information collection requirements subject to the Paperwork Reduction Act of 1995 (44 U.S.C. 3501 et seq.).

E.O. 13132, “Federalism,” 64 FR 43255 (August 4, 1999) requires regulations be reviewed for Federalism effects on the institutional interest of states and local governments, and if the effects are sufficiently substantial, preparation of the Federal assessment is required to assist senior policy makers. The amendments will not have any substantial direct effects on state and local governments within the meaning of the E.O. Therefore, no Federalism assessment is required.Start Printed Page 71828

This rule will not result in the expenditure by State, local, and Tribal governments, in the aggregate, or by the private sector, of $100,000,000 or more in any one year, and it will not significantly or uniquely affect small governments.

PART 1221—THE NASA SEAL AND OTHER DEVICES, AND THE CONGRESSIONAL SPACE MEDAL OF HONOR

1 The authority for subpart 1221.1 continues to read as follows:

This subpart sets forth the policy governing the use of the NASA Seal, the NASA Insignia, NASA Logotype, NASA Program Identifiers, and the NASA Flags. This subpart also establishes and sets forth the concept and scope of the NASA Graphics Standards Manual and prescribes the policy and guidelines for implementation of the system. The NASA Graphics Standards Manual is accessible at https://communications.nasa.gov/​sites/​default/​files/​files/​NASA_​Graphics_​Standards_​v3-TAGGED-v3.pdf. 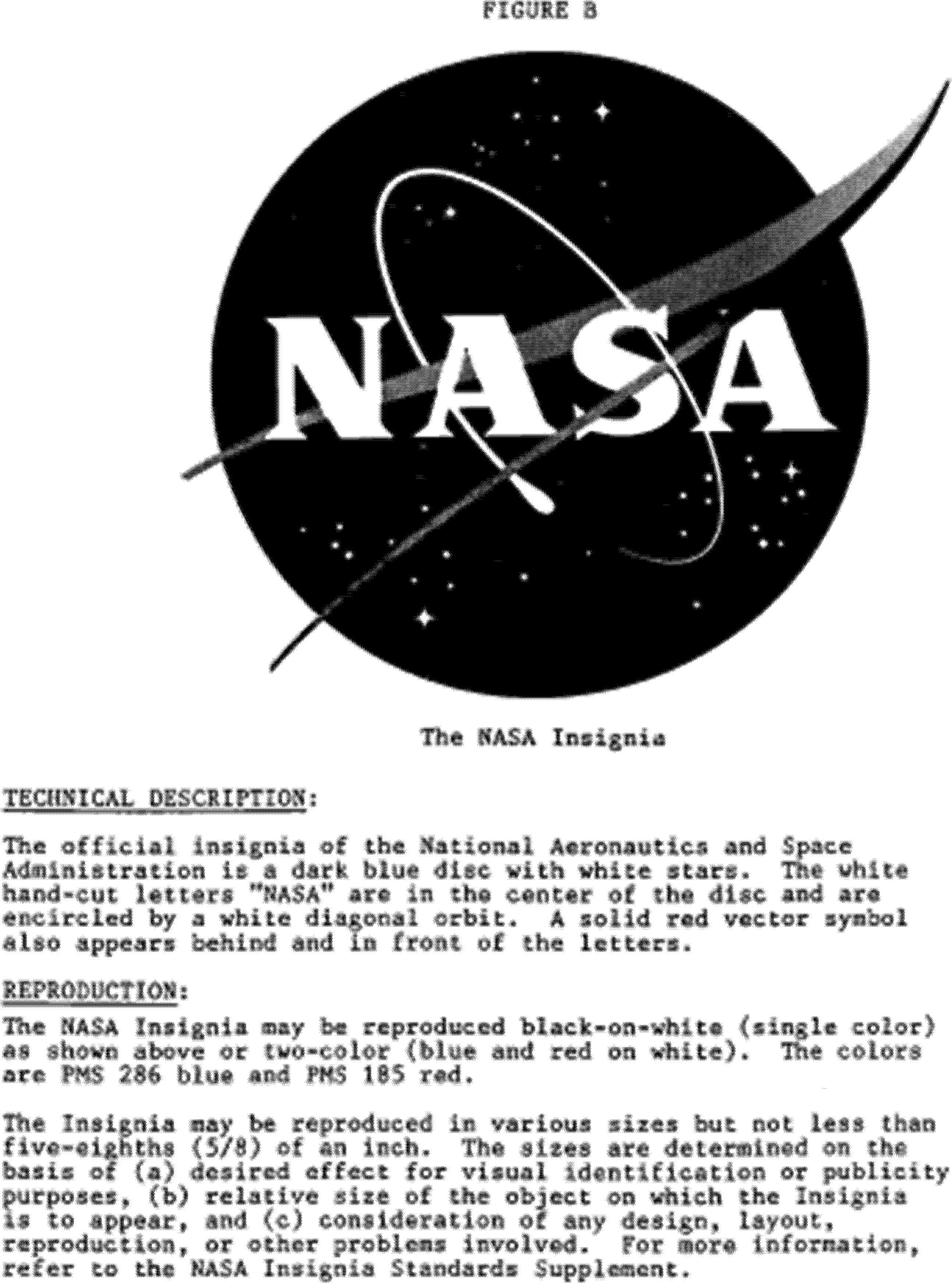 The NASA Logotype (also called “the Worm”) was approved by the Commission of Fine Arts and the NASA Administrator. It symbolizes NASA's role in aeronautics and space from 1975 to 1992 and was retired between 1992-2020. The NASA Logotype shall be used as set forth in § 1221.111. 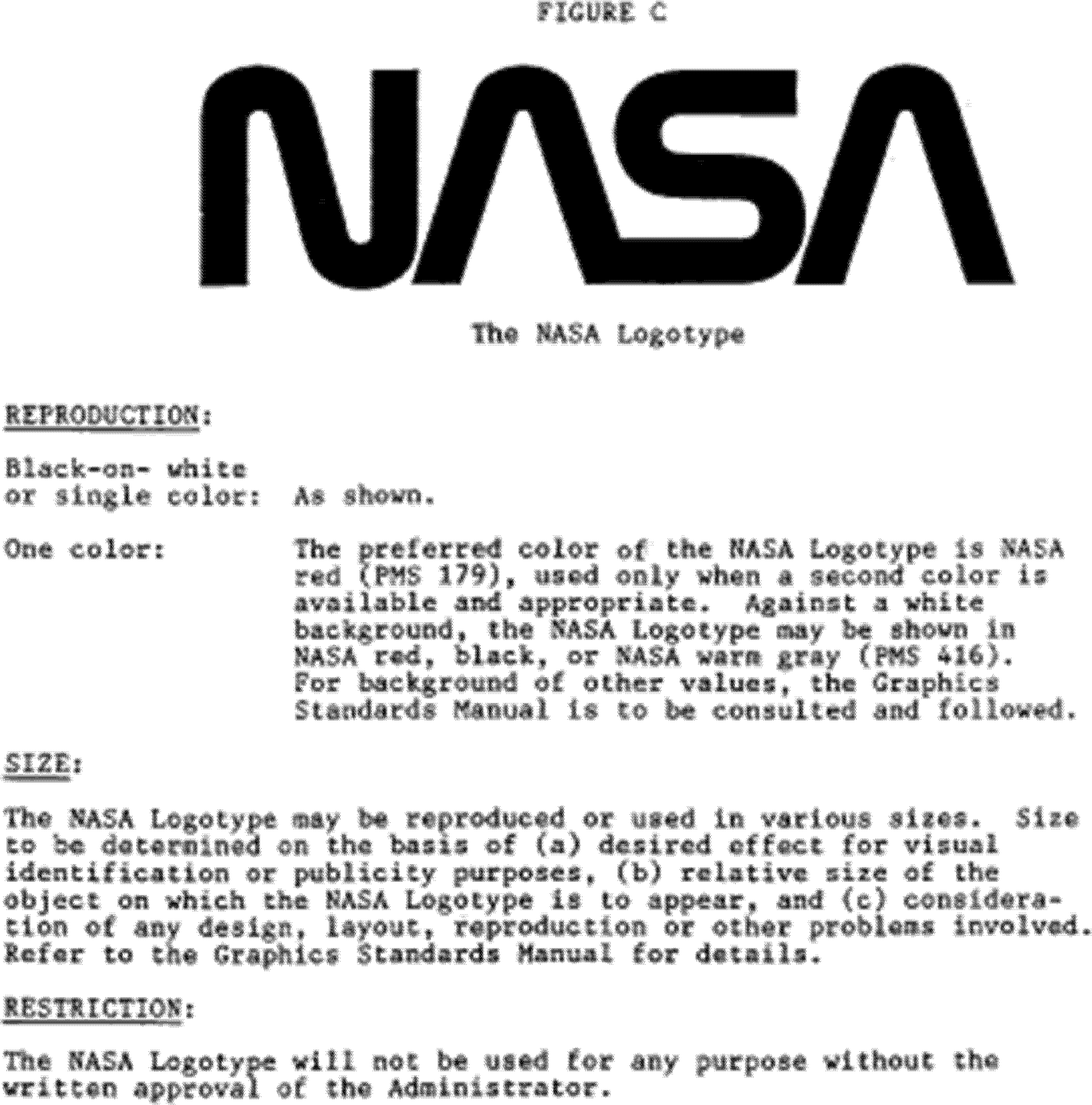 (2) The Administrator's Flag has four stars;

(3) The Deputy Administrator's Flag has three stars; and

(b) Flags representing these senior officials shall be used as set forth in § 1221.113.

(a) The NASA Administrator directed the establishment of a NASA Unified Visual Communications System. The system, which is comprised of the NASA Graphics Standards Manual and any accompanying style guides or related NASA directive or specification, was developed under the Federal Design Improvement Program initiated by the President in May 1972. This system is the Agency-wide program by which NASA projects a contemporary, business-like, progressive, and forward-looking image through the use of effective design for improved communications. The system provides a professional and cohesive NASA identity by imparting continuity of graphics design in all layout, reproduction art, stationery, forms, publications, signs, films, video productions, vehicles, aircraft, and spacecraft markings and other items. It creates a unified image which is representative and symbolic of NASA's progressive attitudes and programs.

(b) The Associate Administrator for Communications is responsible for the development and implementation of the NASA Graphics Standards Manual and any accompanying style guides for the Agency or related NASA directive or specification.

(c) The Associate Administrator for Communications has designated staff to implement and monitor Agency-wide design improvements in consonance with the NASA Graphics Standards Manual. Designated staff will develop and issue changes and additions to the Manual as required and as new design standards and specifications are developed and approved. The NASA Graphics Standards Manual can be downloaded at https://communications.nasa.gov/​sites/​default/​files/​files/​NASA_​Graphics_​Standards_​v3-TAGGED-v3.pdf.

(d) NASA Centers and Headquarters have designated staff to implement NASA's graphics standards and ensure compliance of the NASA Graphics Standards Manual and any accompanying Style Guides or related NASA directive or specification.

(a) The Associate Administrator for Communications shall be responsible for custody of the NASA Impression Seal and custody of NASA replica (plaques) seals. The NASA Seal is restricted to the following:

(4) NASA Administrator's documents; the Seal may be used on documents such as interagency or intergovernmental agreements and special reports to the President and Congress, and on other documents, at the discretion of the NASA Administrator.

(5) Plaques; the design of the NASA Seal may be incorporated in plaques for display in Agency auditoriums, presentation rooms, lobbies, offices of senior officials, and on the fronts of buildings occupied by NASA. A separate NASA seal in the form of a 15-inch, round, bronze-colored plaque on a walnut-colored wood base is also available, but prohibited for use in the above representational manner. It is restricted to use only as a presentation item by the Administrator and the Deputy Administrator.

(7) NASA prestige publications which represent the achievements or missions of NASA as a whole.

(4) Items bearing the NASA Insignia and NASA Logotype such as souvenirs, novelties, toys, models, clothing, and similar items (including items for sale through the NASA employees' nonappropriated fund activities) may be manufactured and sold only after the a request has been submitted to, and approved by, the NASA Office for Communications, NASA Headquarters, Washington, DC 20546.

The NASA Logotype which was retired from 1992-2020 can be used only in an authentic historical context, on merchandise in accordance with § 1221.110, paragraph (c), in the NASA graphics standards/style guide or with prior written approval of the NASA Administrator.

(a) Official NASA Program Identifiers will be restricted to the uses set forth in this section and to such other uses as the Associate Administrator for Communications may specifically approve.

(a) Except for NASA Astronaut Mission Crew Badges/Patches, any proposal to change or modify the emblematic devices set forth in this subpart or to introduce a new emblematic device other than as prescribed in this subpart requires the written approval of the NASA Administrator with prior approval and recommendation of the NASA Associate Administrator for Communications.