NMFS is amending the turtle excluder device (TED) regulations that require most shrimp trawlers to use TEDs in the southeastern Atlantic and the Gulf of Mexico to reduce the incidental capture of endangered and threatened sea turtles during shrimp trawling. Specifically, NMFS is allowing the use of a double cover flap TED with a modified flap design. This modification will allow the use of a flap that extends up to 24 inches (61 cm) past the posterior edge of the TED frame. This modification has been tested and meets the regulatory requirements for efficiency at releasing sea turtles.

Sea turtles are incidentally taken and killed as a result of numerous activities, including fishery trawling activities in the Gulf of Mexico and along the Atlantic seaboard. Under the ESA and its implementing regulations, taking sea turtles is prohibited, with exceptions identified in 50 CFR 223.206, or if in accordance with the terms and conditions of a biological opinion issued under section 7 of the ESA or an incidental take permit issued under section 10 of the ESA. The incidental taking of turtles during shrimp or summer flounder trawling is exempted from the take prohibition if the conservation measures specified in the sea turtle conservation regulations (50 CFR 223) are followed. The regulations require most shrimp trawlers and summer flounder trawlers operating in the southeastern United States (Atlantic area, Gulf area, and summer flounder sea turtle protection area, see 50 CFR 223.206) to have a NMFS-approved TED installed in each net that is rigged for fishing to provide for the escape of sea turtles. TEDs currently approved by NMFS include single-grid hard TEDs and hooped hard TEDs conforming to a generic description, the flounder TED, and one type of soft TED the Parker soft TED (see 50 CFR 223.207).

TEDs incorporate an escape opening, usually covered by a webbing flap, that allows sea turtles to escape from trawl nets. To be approved by NMFS, a TED design must be shown to be 97 percent effective in excluding sea turtles during testing based upon specific testing protocols (50 CFR 223.207(e)(1)). Most approved hard TEDs are described in the regulations (50 CFR 223.207(a)) according to generic criteria based upon certain parameters of TED design, configuration, and installation, including height and width dimensions of the TED opening through which the turtles escape.

Since publication of the final rule, fishermen have reported that the current double cover flap TED design stretches over time. This stretching causes a gap between the flap panels and the grid frame. Fishermen report that this stretching causes loss of shrimp catch. While this loss is unsubstantiated and unquantified, fishermen sought the ability to modify the double cover flap TED design to allow longer flap panels and longer edge lines. Fishermen have concluded that this modification allows retention of shrimp catch.

NMFS tested the modified double cover flap TED using testing protocols designed to evaluate a TED's ability to release large turtles. The protocols were developed during the testing and approval of the double cover flap TED (66 FR 24287, May 14, 2001). NMFS used the average carapace measurements of 15 nesting female leatherback turtles to construct a pipe-framed model of a leatherback turtle. This model measured 40 inches wide by 21 inches (102 cm by 53 cm) deep. The test was performed by a diver swimming repeatedly through the trawl with the model and pushing it through the TED opening. During these tests, the diver was able to push the model through the opening with ease. When the model was inverted (simulating the dorsal surface of the turtle oriented against the TED frame), the diver was still able to push Start Printed Page 31036the model through the opening with ease.

The long flap double cover flap TED was also tested for its ability to release wild turtles of a range of sizes using a modified version of the Cape Canaveral testing protocol published in the Federal Register on October 9, 1990, (55 FR 41092). The 1990 protocol called for the use of a series of double rigged tows, in an area with a high sea turtle concentration (such as the Cape Canaveral Shipping Channel), in which one trawl is a naked net (no TED) and the other includes the experimental TED. The catch of turtles in the naked net is compared to the captures in the net with the TED installed to determine if the TED was at least 97 percent effective at releasing turtles as required by § 223.207(e)(1). NMFS has modified this protocol to better protect turtles and to increase its accuracy. The modifications include the use of two trawls, each rigged with the experimental TED and a video camera mounted by the TED escape opening that can be monitored on board the research vessel. Once the NMFS technician on board the research vessel sees a turtle encounter the TED, the turtle is given 10 minutes to escape. If the turtle does not escape within 10 minutes, the trawl is retrieved and the turtle is released. Any turtle that does not escape within 10 minutes is considered to have been captured.

Using this modified Cape Canaveral protocol, NMFS tested the modified double cover flap TED off the coast of Georgia between November 13 and November 18, 2003, and in the Cape Canaveral Channel between February 19 through March 12, 2004. In total, 33 turtles were exposed to this TED with 32 of the turtles escaping within the 10-minute exposure period for a 97-percent success rate. The turtles exposed to the modified double cover flap TED included one leatherback, seven Kemp's ridleys, and 25 loggerheads. The single turtle that did not escape within the 10-minute limit was a juvenile loggerhead.

Therefore, on April 16, 2004, NMFS published a proposed rule (69 FR 20571) requesting comments on allowing the use of a long flap double cover flap TED in the Atlantic and Gulf of Mexico. No responsive comments were received on the proposed rule.

Provisions of the Final Rule

This final rule has been determined to be not significant for purposes of Executive Order 12866.

The final rule is not expected to result in any direct adverse economic impacts on small entities. However, an RFA was conducted. Based on a compilation of data from the shrimp landings file for the Gulf, Florida trip ticket data, and data from the Georgia shrimp landings system, the maximum known gross revenue for an individual fishing craft in the Gulf and South Atlantic shrimp fisheries in 1999 was approximately $724,000 in nominal dollars. While this figure could be an underestimate of the true maximum value since currently available data does not allow all shrimp landings from different parts of the region and their associated revenues to be linked to a particular fishing craft, this figure is sufficiently less than $3.5 million, supporting the presumption that all firms in the Gulf and South Atlantic shrimp trawl fisheries are small business entities.

Adoption of the no action alternative (not allowing the use of the long flap double cover flap TED) would result in the fishermen's continued reports, but unsubstantiated and unquantified, loss of shrimp resulting from flap stretching over time as the double-cover TEDs are used. Thus, adoption of this no-action alternative will result in the continuation of an unanticipated adverse consequence of the original TED specifications. Although the amount of current shrimp loss as a result of this problem, and the subsequent impacts on revenues and profitability, are unknown, any perceived unnecessary adverse impacts on the economic performance of participants in the fishery further erodes the viability of continued participation, jeopardizing both the shrimping businesses themselves as well as associated industries.

A copy of the EA/RFA/RIR is available from NMFS (see ADDRESSES).

The Assistant Administrator for Fisheries, NOAA, (AA) waives the 30-day delay in effectiveness of this final rule because this rule relieves an existing restriction, and for other good cause. Under the existing TED regulations fishermen can choose to use a single grid hard TED with a 44-inch opening (112- cm)(inshore only), a 71-inch (180-cm) opening, or a double cover flap with a 6-inch (15.3-cm) flap, or they can use the inshore or offshore hooped hard TEDs or the Parker soft TED. Until this final rule becomes effective, long flap double cover flap TED use would not be legal in the southeast shrimp trawl fishery. This rule relieves this restriction for all fishermen in the southeast shrimp trawl fishery. In addition, there are 230 fishermen who have permits to use the long flap double cover flap TED, these permits expire on May 31, 2004. Responses from these fishermen indicate that shrimp loss is low with this TED and they would like to continue to use it. Accordingly, if the effectiveness of this rule is delayed, these permits will expire and the fishermen who are currently using this TED and plan to continue using it will be forced either to abstain from fishing until the rule becomes effective, or else modify their TEDs to meet the current requirements and then modify them back when the rule becomes effective a short time later. Waiver of the 30 day delay in effectiveness will save the fishermen the time and expense of making this change for a limited time only. Therefore, the AA waives the 30 day delay in effectiveness for this final rule.

The Endangered Species Act provides the statutory basis for this proposed rule.

For the reasons set out in the preamble, 50 CFR part 223 is amended as follows:

1. The authority citation for part 223 continues to read as follows:

(iii) Double cover flap offshore TED flap. This flap must be composed of two equal size rectangular panels of webbing. Each panel must be no less than 58 inches (147 cm) wide and may overlap each other no more than 15 inches (38 cm). The panels may only be sewn together along the leading edge of the cut. The trailing edge of each panel must not extend more than 24 inches (61 cm) past the posterior edge of the grid (Figure 16 to this part). Each panel may be sewn down the entire length of the outside edge of each panel. Chafing webbing described in paragraph (d)(4) of this section may not be used with this type of flap. 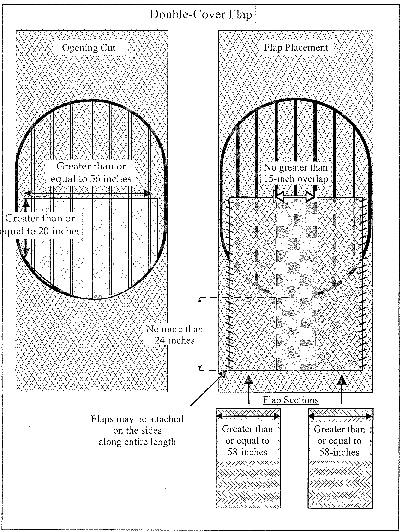