The following is a copy of a letter to the Speaker of the House of Representatives, Transmittal 16-01 with attached Policy Justification and Sensitivity of Technology. 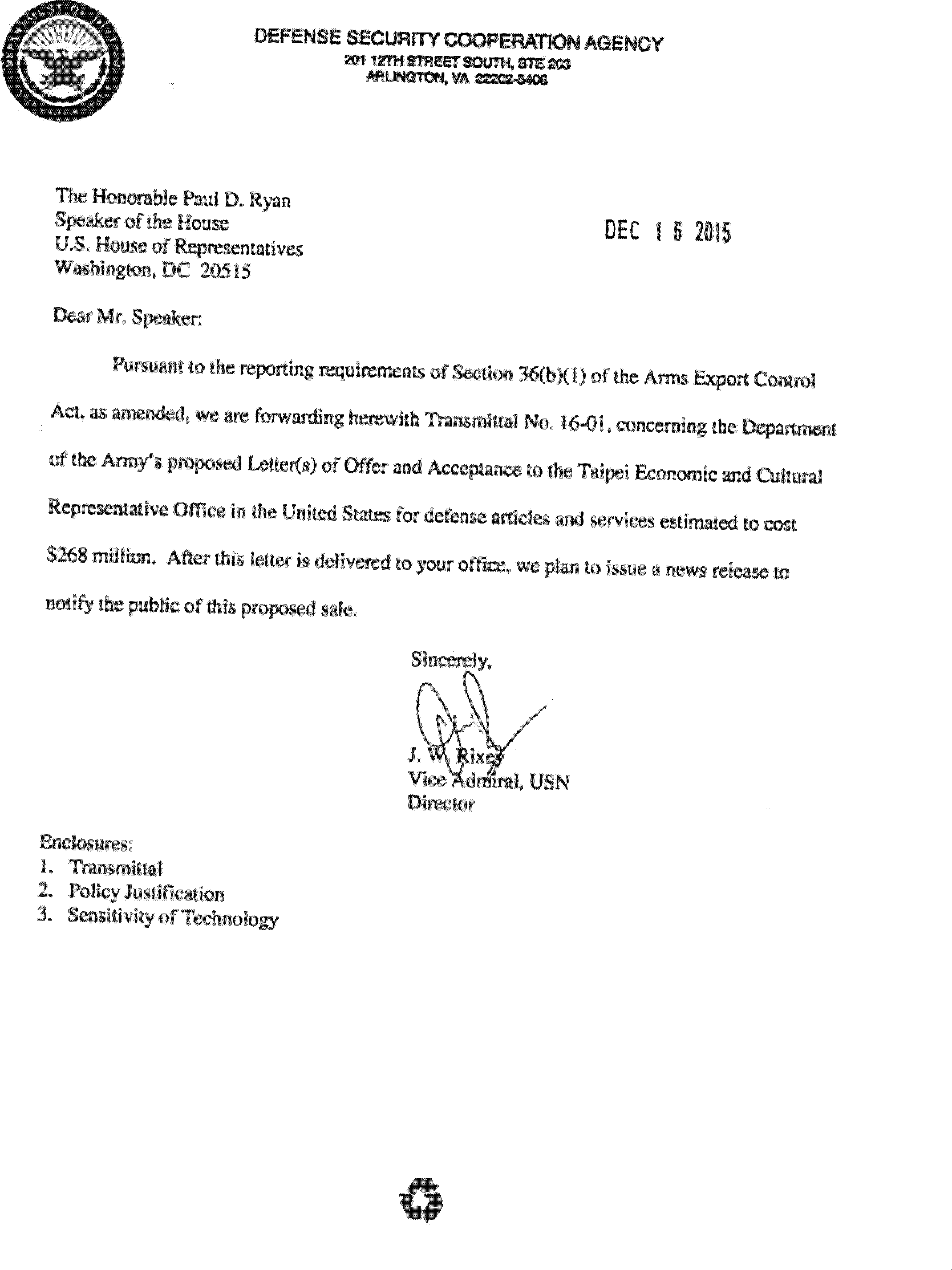 Notice of Proposed Issuance of Letter of Offer Pursuant to Section 36(b)(1) Of the Arms Export Control Act, as amended

(i) Prospective Purchaser: Taipei Economic and Cultural and Representative Office in the United States

(v) Prior Related Cases, if any: None

* as defined in Section 47(6) of the Arms Export Control Act.

This sale is consistent with United States law and policy as expressed in Public Law 96-8.

This proposed sale serves U.S. national, economic, and security interests by supporting the recipient's continuing efforts to modernize its armed forces and enchance its defensive capability. The proposed sale will help improve the security of the recipient and assist in maintaining political stability, military, balance, and economic progress in the region.

The proposed sale of TOW 2B Missiles, ITAS Launchers, and technical support will advance the recipient's efforts to develop and integrated ground defense capability. A strong national defense and dedicated military force will assist the recipient in its efforts to maintain stability. The recipient will have no difficulty absorbing this equipment into its armed forces.

The principal contractor involved in this program is Raytheon Missile Systems (RMS) of Tucson, Arizona, and McKinney, Texas. The purchaser normally requests industrial cooperation at forty percent, but at this time there are no known offset agreements proposed in connection with this potential sale.

Implementation of this proposed sale will require the U.S. Government or contractor representatives to travel to the recipient for multiple period of equipment de-processing/fielding, system checkout, and new equipment training. There will be no more than ten contractor personnel at any one time and all efforts will take less than 16 weeks in total.

Notice of Proposed Issuance of Letter of Offer Pursuant to Section 36(b)(l) of the Anns Export Control Act, as amended

1. The TOW 2B Aero Radio Frequency (RF) Missile (BGM-71F-3-RF) is a fly-over-shootdown missile designed to defeat armored vehicles. TOW missiles are fired from a variety of TOW Launchers in the U .S. Army, U.S. Marine Corps and Foreign Military Sales (FMS) customer forces. The TOW 2B Aero RF missile can be launched from the same launcher platforms as the existing wire-guided TOW 2B and TOW 2B Aero missiles without modification to the launcher. The TOW 2B missile (both wire & RF) contains two tracker beacons (xenon and thermal) for the launcher to track and guide the missile in flight. Guidance commands from the launcher are provided to the missile by an RF link contained within the missile case. Software for performance data, lethality penetration, and sensors are classified SECRET.

2. The Improved Target Acquisition System (ITAS) is designed to fire all existing versions of the TOW missile and consists of a Target Acquisition Subsystem (TAS), a Fire Control Subsystem (FCS), a Li-Ion Battery Box (LBB), a modified Traversing Unit (TU) plus the standard launch tube and tripod. The ITAS provides for the integration of both the direct view optics and a second generation Standard Advanced Dewar Assembly (SADA) II thermal sensor into a single housing; direct view optics that provide viewing the target scene in daylight and non-obscured conditions; introduction of both passive and active eye safe laser-ranging; development of embedded training and training sustainment; automatic bore sight which allows the gunner to align the night vision system with the direct view optics; insertion of advanced Built-In Test/Built-In Test Equipment (BIT/BITE) which provides fault detection and recognition and go/no go status for the gunner; and an Aided Target Tracker (ATT) that provides the capability to process infrared imagery into recognizable contour features used to assist the gunner's aim point.

3. If a technologically advanced adversary were to obtain knowledge of the specific hardware and software elements, the information could be used to develop countermeasures that might reduce weapon system effectiveness or be used in the development of a system with similar or advanced capabilities. All defense articles and services listed in this transmittal have been authorized for release and export to the recipient.