The following is a copy of a letter to the Speaker of the House of Representatives, Transmittal 16-05 with attached Policy Justification and Sensitivity of Technology. 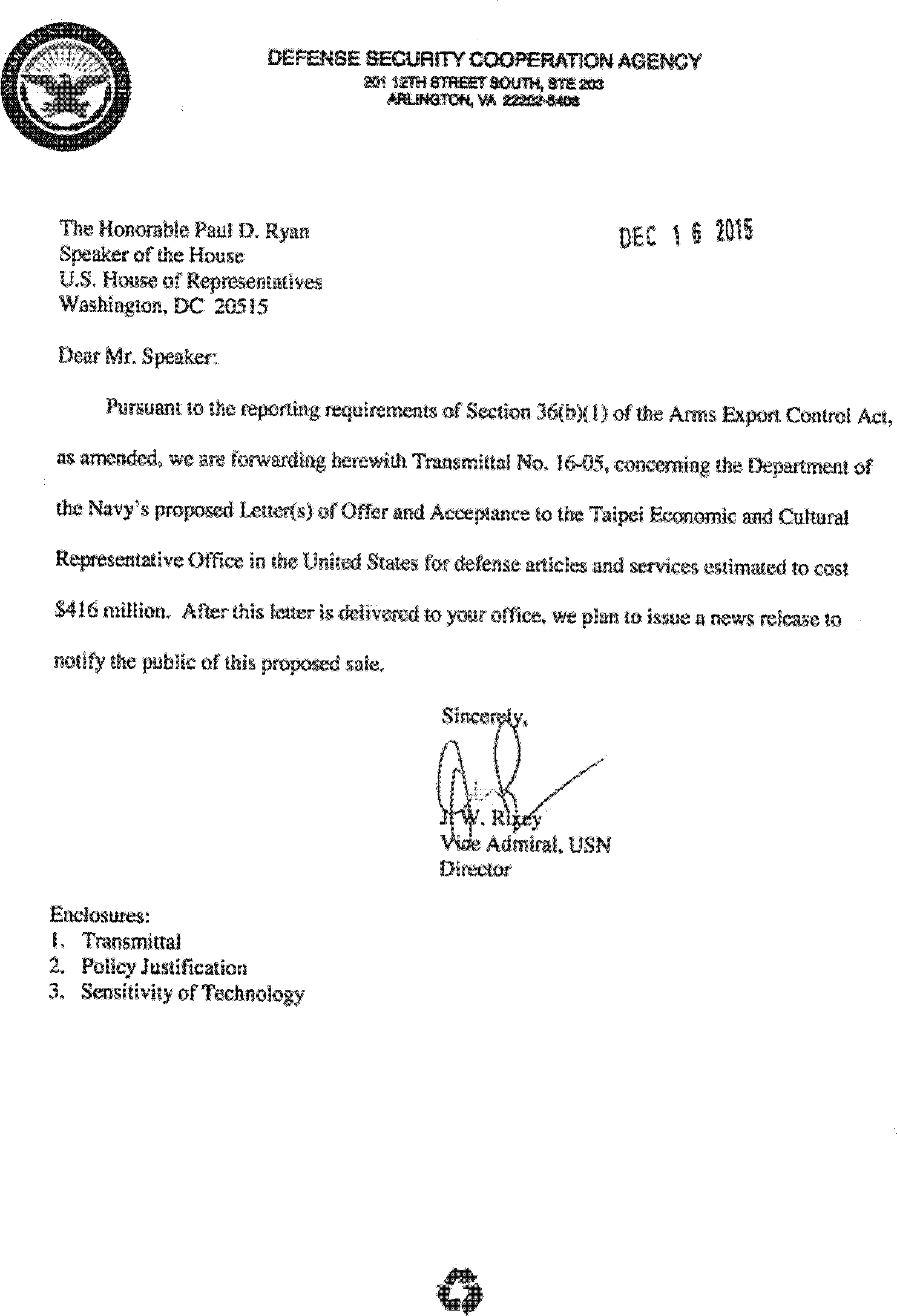 (v) Prior related cases, if any:

(vi) Sales Commission, Fee, etc., Paid, Offered. or Agreed to be Paid: None

(vii) Sensitivity to Technology Contained in the Defense Article or Defense Services Proposed to be Sold: See Attached Annex.

*as defined in Section 47(6) of the Arms Export Control Act.

The Taipei Economic and Cultural Representative Office in the United States has requested a possible sale of:

This sale is consistent with United States law and policy as expressed in Public Law 96-8.

This proposed sale serves U.S. national, economic, and security interests by supporting the recipient's continuing efforts to modernize its armed forces and enhance its defensive capability. The proposed sale will help improve the security of the recipient and assist in maintaining political stability, military balance, and economic progress in the region.

The prime contractor will be Raytheon Missile Systems Company in Tucson, Arizona. The purchaser has requested an offset of forty percent. At this time, agreements are undetermined and will be defined in negotiations between the purchaser and contractor.

Implementation of this proposed sale should not require the permanent assignment of additional U.S. Government or contractor representatives outside the United States.

a. A Radar Upgrade that provides increased sensitivity on sea-skimming threats and improved low-observable performance.

b. A stabilized thermal imager and an automatic acquisition video tracker that were introduced with the Block 1B Baseline 0 configuration. These components provide the capability to engage small, high speed, maneuvering surface craft and low, slow aircraft and helicopters. The thermal imager also improves performance against Anti-Ship Cruise Missiles by carrying out more accurate angle tracking information to the fire control computer. Purchaser has already been provided this capability with the Block 1B Baseline 0 previously procured via an FMS case.

c. The Optimized Gun Barrel that was also introduced with the Block l B Baseline 0 and provides improved dispersion performance of the ammunition when the system is fired. This gun barrel also permits use of the MK 244 ammunition, an enhanced lethal cartridge capable of penetrating harder warheads in use today. Purchaser has already been provided this capability with the Block l B Baseline 0 previously procured via an FMS case.

3. A determination has been made that the recipient country can provide the same degree of protection for the sensitive technology being released as the U.S. Government. This sale is Start Printed Page 7516necessary in furtherance of the U.S. foreign policy and national security objectives outlined in the Policy Justification.

4. All defense articles and services listed in this transmittal have been authorized for release and export to the recipient.