An interracial group of “Freedom Riders” set out in May 1961 on a journey from Washington, DC, to New Orleans through the Deep South. In organizing the 1961 Freedom Rides, the Congress of Racial Equality (CORE) was building upon earlier efforts of other civil rights organizations, including the 1947 “Journey of Reconciliation,” an integrated bus ride through the segregated Upper South. The purpose of the 1961 Freedom Rides was to test if bus station facilities in the Deep South were complying with U.S. Supreme Court decisions. Brown v. Board of Education of Topeka (1954) had reversed the infamous “separate but equal” doctrine in public education, and Morgan v. Virginia (1946) and Boynton v. Virginia (1960) had struck down Virginia laws compelling segregation in interstate travel.

These rulings were the result of successful litigation brought by the National Association for the Advancement of Colored People, which laid the groundwork for direct action campaigns by civil rights organizations like CORE, the Southern Christian Leadership Conference, and the Student Nonviolent Coordinating Committee (SNCC). These organizations had gathered strength, and by the 1950s had launched mass movements that demonstrated the power of nonviolent protest. At the same time, reaction to the decision in Brown v. Board of Education had heightened racial tensions in the country, especially in the Deep South. White Citizens' Councils, made up of politicians, businessmen, and civic leaders committed to resisting integration, formed throughout the South. In 1956, over 100 members of Congress signed the “Southern Manifesto,” which criticized the Brown decision and called for resistance to its implementation. This campaign of massive resistance launched by white segregationists reinforced their determination to assure continued separation of the races in public spaces.

Against this background, on May 4, 1961, in Washington, DC, eleven Freedom Riders split into two groups and boarded two buses, a Greyhound bus and a Trailways bus, bound for New Orleans. The Greyhound bus carrying the first of these groups left Atlanta, Georgia on Sunday, May 14, and pulled into a Greyhound bus station in Anniston, Alabama later that day. There, a segregationist mob, including members of the Ku Klux Klan, violently attacked the Freedom Riders. The attackers threw rocks at the bus, broke windows, and slashed tires. Belatedly, police officers arrived and cleared a path, allowing the bus to depart with a long line of vehicles in pursuit. Two cars pulled ahead of the bus and forced the bus to slow to a crawl. Six miles outside of town, the bus's slashed tires gave out and the driver stopped on the shoulder of Highway 202. There, with the Freedom Riders onboard, one member of the mob threw a flaming bundle of rags through one of the windows that caused an explosion seconds later. The Freedom Riders struggled to escape as members of the mob attempted to trap them inside the burning bus. When they finally broke free, they received little aid for their injuries. Later that day, deacons dispatched by Reverend Fred L. Shuttlesworth of Birmingham's Bethel Baptist Church rescued the Freedom Riders from the hostile mob at Anniston Hospital and drove them to Birmingham for shelter at the church. A freelance photojournalist captured the horrific scene of the attack in photographs, Start Printed Page 6160which appeared on the front pages of newspapers across America the next day. The brutal portrayal of segregation in the South shocked many Americans and forced the issue of racial segregation in interstate travel to the forefront of the American conscience.

When the Trailways bus, which had departed Atlanta an hour after the Greyhound bus, arrived in Anniston, the Trailways station was mostly quiet. A group of Klansmen boarded the bus and forcibly segregated the Freedom Riders. With all aboard, the bus left on its two-hour trip to Birmingham during which the Klansmen continued to intimidate and harass the Freedom Riders. When the Trailways bus arrived in Birmingham, a mob of white men and women attacked the Freedom Riders, reporters, and bystanders with fists, iron pipes, baseball bats, and other weapons, while the police department under the charge of Commissioner of Public Safety T. Eugene “Bull” Connor was nowhere to be seen. After fifteen minutes of violence, the mob retreated and the police appeared.

Leaders of the Nashville Student Movement, including members of SNCC, firmly believed that they could not let violence prevail over nonviolence. They organized an interracial group of volunteers to travel to Birmingham and resume the Freedom Rides. Under police protection negotiated with help from the Kennedy Administration, on May 20, these SNCC Freedom Riders departed Birmingham en route to Montgomery, Alabama, where an angry white mob viciously attacked them. The next night, Dr. Martin Luther King, Jr.—who had not been involved in the planning of the Freedom Rides—joined Reverend Ralph David Abernathy and Reverend Shuttlesworth at a mass meeting in Abernathy's First Baptist Church in Montgomery. A white mob gathered outside the church, attacked African American onlookers, and held hostage the civil rights leaders and approximately 1,500 attendees inside the church. King remained in telephone communication with Attorney General Robert F. Kennedy while U.S. marshals attempted to repel the siege. Finally, Governor John Patterson was forced to declare martial law and send in the National Guard.

Media coverage of the Freedom Rides inspired many people to take action and join the effort to end racial inequality. Over the summer of 1961, the number of Freedom Riders grew to over 400, many of whom were arrested and jailed for their activism. The Freedom Rides of 1961 focused national attention on Southern segregationists' disregard for U.S. Supreme Court rulings and the violence that they used to enforce unconstitutional State and local segregation laws and practices. The Freedom Rides forced the Federal Government to take steps to ban segregation in interstate bus travel. On May 29, 1961, Attorney General Kennedy petitioned the Interstate Commerce Commission (ICC) to issue regulations banning segregation, and the ICC subsequently decreed that by November 1, 1961, bus carriers and terminals serving interstate travel had to be integrated.

As described above, the sites of these events contain objects of historic interest from a critical period of American history.

WHEREAS, section 320301 of title 54, United States Code (known as the “Antiquities Act”), authorizes the President, in his discretion, to declare by public proclamation historic landmarks, historic and prehistoric structures, and other objects of historic or scientific interest that are situated upon the lands owned or controlled by the Federal Government to be national monuments, and to reserve as a part thereof parcels of land, the limits of which shall be confined to the smallest area compatible with the proper care and management of the objects to be protected;

WHEREAS, the City of Anniston has donated to The Conservation Fund fee title to the former Greyhound bus station building in downtown Anniston, Alabama, approximately 0.17 acres of land;

WHEREAS, Calhoun County has donated to The Conservation Fund fee title to the site of the bus burning outside Anniston, Alabama, approximately 5.79 acres of land;Start Printed Page 6161

WHEREAS, The Conservation Fund has relinquished and conveyed all of these lands to the United States of America;

WHEREAS, it is in the public interest to preserve and protect the historic objects associated with the former Greyhound bus station in Anniston, Alabama, and the site of the bus burning outside Anniston in Calhoun County, Alabama;

All Federal lands and interests in lands within the boundaries described on the accompanying map are hereby appropriated and withdrawn from all forms of entry, location, selection, sale, or other disposition under the public land laws, from location, entry, and patent under the mining laws, and from disposition under all laws relating to mineral and geothermal leasing.

The Secretary of the Interior (Secretary) shall manage the monument through the National Park Service, pursuant to applicable legal authorities, consistent with the purposes and provisions of this proclamation. The Secretary shall use available authorities, as appropriate, to enter into agreements with others to address common interests and promote management needs and efficiencies.

The Secretary shall prepare a management plan, with full public involvement, within 3 years of the date of this proclamation. The management plan shall ensure that the monument fulfills the following purposes for the benefit of present and future generations: (1) to preserve and protect the objects of historic interest associated with the monument, and (2) to interpret the objects, resources, and values related to the civil rights movement. The management plan shall, among other things, set forth the desired relationship of the monument to other related resources, programs, and organizations, both within and outside the National Park System.

Nothing in this proclamation shall be deemed to revoke any existing withdrawal, reservation, or appropriation; however, the monument shall be the dominant reservation.

Warning is hereby given to all unauthorized persons not to appropriate, injure, destroy, or remove any feature of this monument and not to locate or settle upon any of the lands thereof.Start Printed Page 6162

IN WITNESS WHEREOF, I have hereunto set my hand this twelfth day of January, in the year of our Lord two thousand seventeen, and of the Independence of the United States of America the two hundred and forty-first. 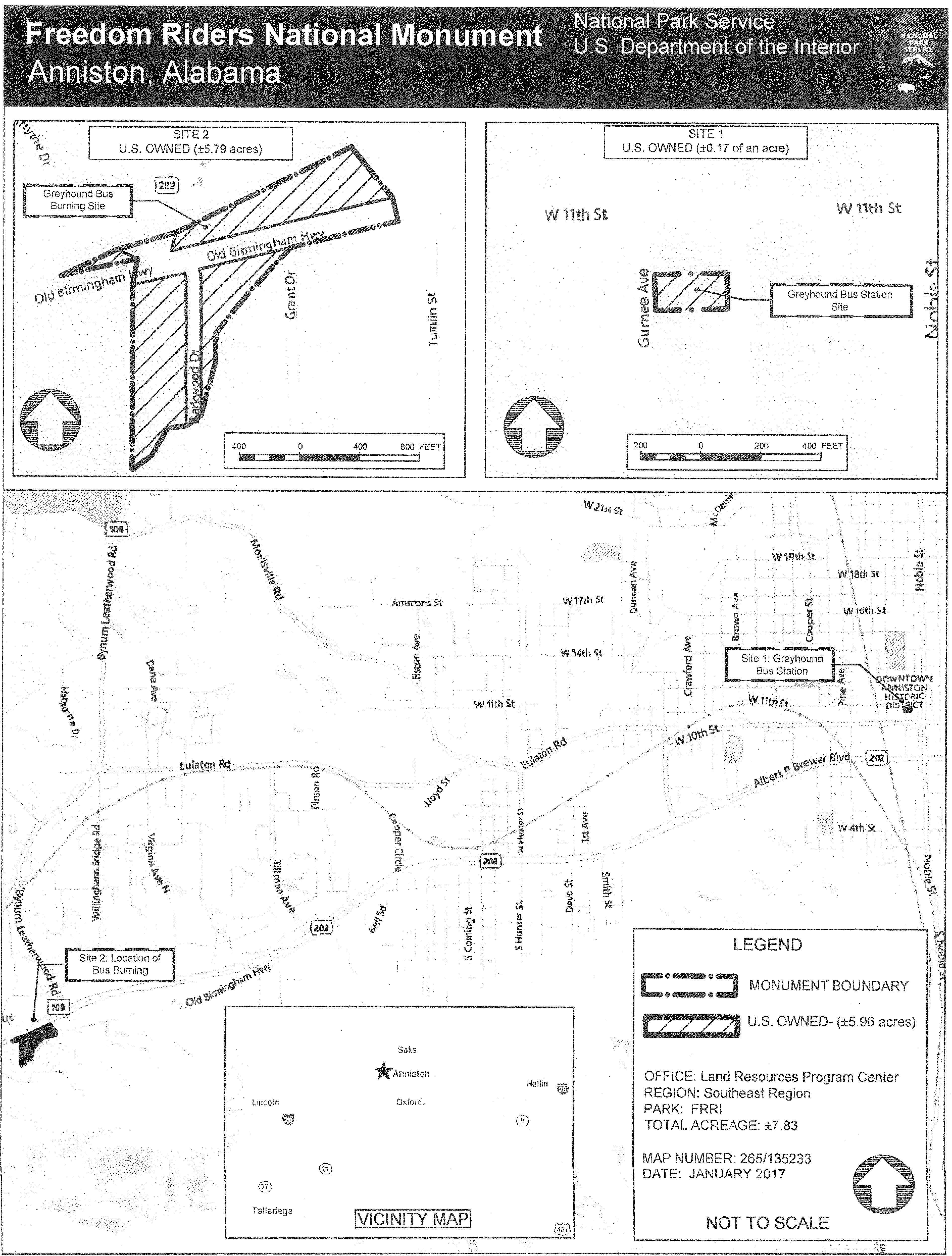