This final rule addresses a petition for reconsideration of the final rule for FMVSS No. 136, Electronic stability control systems for heavy vehicles. The petitioner, Truck and Engine Manufacturers Association (EMA), requested that NHTSA amend the test conditions for the agency's performance test by allowing a larger lane width for long wheelbase truck tractors. After a careful technical review of the petition and the issues raised by the petitioner, the agency has decided to grant the petition because there is sufficient evidence to indicate that a larger lane width is needed for testing of long wheelbase truck tractors.

Petitions for reconsideration of this final rule must refer to the docket and notice number set forth above and be submitted to the Administrator, National Highway Traffic Safety Administration, 1200 New Jersey Avenue SE., Washington, DC 20590.

To test the performance of ESC systems, NHTSA included a 150-foot radius J-turn test maneuver. The test course for the test maneuver is shown in Figure 1. This maneuver involves accelerating to a constant speed on a straight stretch of high-friction track before entering into a 150-foot radius curve. After entering the curve, the driver attempts to maintain the lane. At a speed that is up to 1.3 times the lowest entrance speed at which the ESC system activates, but no less than 48.3 km/h (30 mph), an ESC system must activate the vehicle's service brakes to slow the vehicle to 46.7 km/h (29 mph) within 3 seconds after entering the curve and 45.1 km/h (28 mph) within 4 seconds after entering the curve. The test vehicle must also remain within the lane. 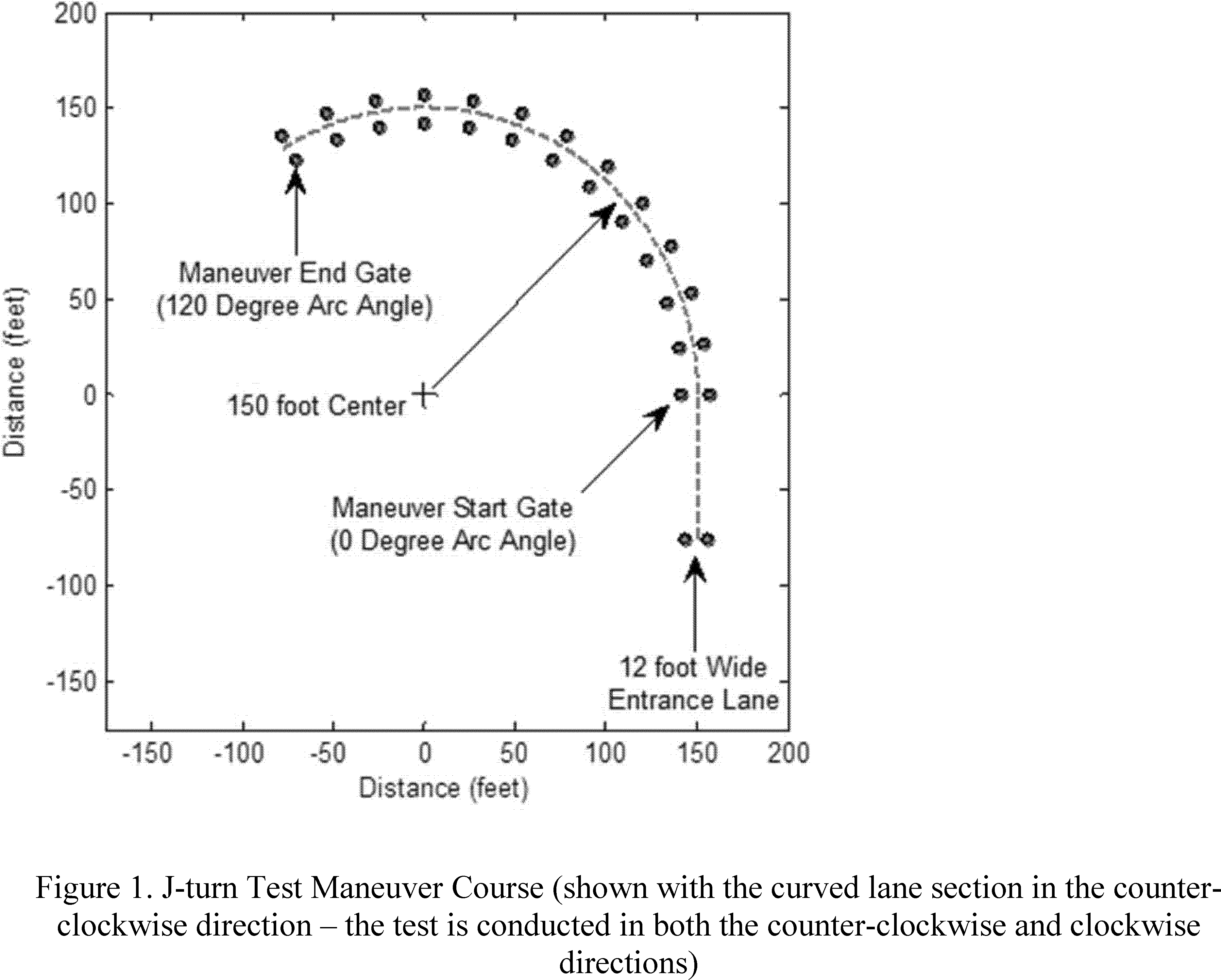 For truck tractors, the lane width is 3.7 meters (12 feet) for both the straight section and the curved section of the course. However, after testing large buses, the agency determined that large buses require additional lane width on the curved section of the course because buses have longer wheelbases, which make it substantially more difficult to maintain a narrower lane within the curve. During testing of buses on a 3.7 meter (12 foot) width lane, the bus could not maintain the lane because of the geometry of the vehicle, not because of lack of stability. NHTSA determined that 4.3 meters (14 feet) was an appropriate lane width for testing large buses.

As described in the final rule, the nature of the J-turn test provides two criteria for ensuring vehicle responsiveness: Maintaining the lane within the fixed radius curve and a minimum test speed. These criteria for vehicle responsiveness are needed because there is a possibility of a manufacturer designing a vehicle that Start Printed Page 50091responds poorly to the operator's speed and steering inputs, which would mask the actual performance of the ESC system.

The first responsiveness criterion is the requirement that the vehicle maintain the lane during at least six of eight runs in the roll stability performance test series or at least two of four runs in the engine torque reduction test. This requirement ensures that, during J-turn test runs at increasing speeds, the ESC system activates before the vehicle becomes unstable. We allowed multiple test runs, instead of a single test run, to account for driver variability and possible driver error in conducting the maneuver. Absent driver error, we do not expect any vehicle equipped with a properly functioning ESC system to exceed the lane width during any of the tests using the J-turn maneuver.

The other responsiveness criterion in the final rule is the minimum vehicle entry speed, which is 48 km/h (30 mph) for the roll performance test. The reason for this requirement is to discourage a manufacturer from designing a system that unnecessarily intervenes at very low speeds, thus artificially decreasing the speed at which the vehicle will enter the curve during the roll performance test.

On August 7, 2015, the Truck and Engine Manufacturers Association (EMA) submitted a petition to NHTSA, pursuant to 49 CFR 553.35, requesting that the agency reconsider its June 2015 final rule establishing FMVSS No. 136. EMA is a trade association representing manufacturers of commercial motor vehicles, including medium- and heavy-duty truck tractors. EMA's petition indicated that the 3.7 meter (12 foot) lane width used in the FMVSS No. 136 test procedure presents difficulty in successfully completing the J-turn test for a small subset of truck tractors to achieve certification. According to EMA, long wheelbase truck tractors, such as specialty tractors and severe service tractors, cannot navigate the curve of the test course for the J-turn test maneuver because the radius paths of the trucks are dimensionally too large. This physical limitation does not allow the rear wheels to stay inside the 12-foot-wide lane. The petitioner states that this issue only affects certain long wheelbase truck tractors, which make up about one percent of the annual sales of the new truck tractor market.

EMA asserted that the curved section of the 12-foot-wide lane is too narrow, and therefore, it is impracticable for the testing of a long wheelbase truck tractor with a wheelbase equal to or greater than 7112 millimeters (280 inches). EMA stated that it was challenging for the drivers of tractors with wheelbases larger than 280 inches to complete the maneuver in the 12-foot-wide lane, because there was not an adequate margin of physical space to account for test variability. EMA listed factors that contribute to the variability of its test results which included: (i) The length of the tractor's wheelbase, (ii) the experience level of the test driver, (iii) whether the maneuver is conducted in the clockwise or counter-clockwise direction, and (iv) other vehicle attributes such as steering system, suspensions, axles, and tires. EMA has shown that there are dimensional limitations for certain long wheelbase truck tractors to conduct the J-turn test maneuver within 12-foot-wide lane and a larger lane width is needed to adequately test the ESC systems.

In support of the petition for reconsideration, on June 30, 2016, EMA submitted data from testing and computer simulations indicating that a lane width of 4.3 meters (14 feet) was necessary for these long wheelbase truck tractors. EMA tested three truck tractors with three test drivers of varying degrees of experience in conducting the J-turn maneuver in both directions (clockwise and counterclockwise). EMA also performed computer simulations on three example tractors to do a static analysis showing the clearance of the truck tractor within the lane. Based on engineering recommendations from all of the major heavy-duty tractor manufacturers using the results of the computer simulations and the vehicle testing, EMA requests that truck tractors with a wheelbase equal to or greater than 7112 mm (280 inches) be conducted on a J-turn test course with a lane width of 4.3 meters (14 feet).

Pursuant to the process established under 49 CFR 553.37, after carefully considering all aspects of the petition and its subsequent data submission, the agency has decided to grant the petition without further proceedings. EMA's vehicle testing and computer simulation data support its position that truck tractors with a wheelbase equal to or greater than 7112 millimeters (280 inches) should be conducted on a test course with a wider lane, and we believe the suggested width of 4.3 meters (14 feet) is appropriate. The agency had made similar provisions for large buses by allowing a 14-foot-wide lane after first considering a 12-foot-wide lane.[2] During bus testing, NHTSA observed a decrease in clearance between a vehicle and the lane boundaries as wheelbase length increases. EMA's submission further reinforces this work and applies it to truck tractors. NHTSA agrees that there are dimensional limitations for long wheelbase vehicles that potentially make it impractical to conduct the J-turn test maneuver within 12-foot-wide lane, and a larger lane width is needed to adequately test the ESC systems.

This change requires two clarifications. First, as with buses, the wider lane is used only in the curved section of the test course. The lane width of the straight section will remain 3.7 meters (12 feet). The dimensional considerations that require a wider lane width for long wheelbase vehicles do not apply to straight sections of the test course.

This action addresses a petition for reconsideration of the June 2015 final rule requiring ESC on truck tractors and certain large buses. However, the petition only addresses one test condition applicable to approximately one percent of truck tractors. This final rule amends the standard to allow long wheelbase truck tractors to be tested in a wider lane to account for the geometry of a turning vehicle and to ensure that the J-turn remains a test of the vehicle's stability and not the test driver. This final rule imposes no costs and adjusts FMVSS No. 136 to give more flexibility to manufacturers testing long wheelbase trucks. This action will not have any safety impacts.

Executive Order 13771 titled “Reducing Regulation and Controlling Regulatory Costs,” directs that, unless prohibited by law, whenever an executive department or agency publicly proposes for notice and comment or otherwise promulgates a new regulation, it shall identify at least two existing regulations to be repealed. In addition, any new incremental costs associated with new regulations shall, to the extent permitted by law, be offset by the elimination of existing costs. Only those rules deemed significant under section 3(f) of Executive Order 12866, “Regulatory Planning and Review,” are subject to these requirements. As discussed above, this rule is not a significant rule under Executive Order 12866 and, accordingly, is not subject to the offset requirements of Executive Order 13771.

Anyone is able to search the electronic form of all documents received into any of our dockets by the name of the individual submitting the document (or signing the document, if submitted on behalf of an association, business, labor union, etc.). You may review DOT's complete Privacy Act Statement in the Federal Register published on April 11, 2000 (65 FR 19477-78) or you may visit http://www.transportation.gov/​privacy.

E. Other Rulemaking Analyses and Notices

In the June 2015 final rule, the agency discussed relevant requirements related to Executive Order 13132 (Federalism), Executive Order 12988 (Civil Justice Reform); Executive Order 13045 (Protection of Children from Environmental Health and Safety Risks); the Paperwork Reduction Act, the National Technology Transfer and Advancement Act, the Unfunded Mandates Reform Act, and the National Environmental Policy Act. As today's final rule merely adjusts one test condition in FMVSS No. 136 for approximately one percent of truck tractors subject to the standard, it will not have any effect on the agency's analyses in those areas.

In consideration of the foregoing, NHTSA amends 49 CFR part 571 as follows:

1. The authority citation for part 571 continues to read as follows:

Tandem axle means a group or set of two or more axles placed in close arrangement, one behind the other, with the centerlines of adjacent axles not more than 72 inches apart.