Bureau of Industry and Security, Commerce.

In this rule, the Bureau of Industry and Security (BIS) is amending the Export Administration Regulations (EAR) to conform to the Department of State's (State) amendment of February 14, 2018 to the International Traffic in Arms Regulations (ITAR) that placed restrictions on exports of defense articles (and defense services) to the Republic of South Sudan (South Sudan). The State action reflected a policy determination by the Secretary of State Start Printed Page 38022that it was in the best interests of U.S. foreign policy to impose such restrictions.

Consistent with the State action, in this amendment, BIS is updating the EAR to restrict the export and reexport of certain items on the Commerce Control List to South Sudan. Pursuant to established procedure, BIS adds South Sudan to the list of U.S. embargoed countries under the EAR, a list drawn from the list of arms embargoes in the ITAR and State Federal Register notices, and adopts a restrictive license application review policy consistent with State's review policy set forth in the ITAR.

In a rule effective July 9, 2011, the date the United States granted formal recognition to South Sudan, BIS amended the EAR to add the new country to the Commerce Country Chart set forth in Supplement No. 1 to part 740 and imposed controls on exports and reexports of items subject to the EAR to the destination. See 76 FR 41046 (July 13, 2011). In that rule, BIS added South Sudan to Country Group B in Supplement No. 1 to Part 740 (Country Groups), a grouping that rendered the country eligible for certain License Exceptions not available to countries in Country Groups D or E.

In this rule, BIS amends Supplement No.1 to Part 740 (Country Groups) of the EAR to place South Sudan in Country Group D:5—U.S. Embargoed Countries—to conform with a final rule published by State that revised ITAR § 126.1 (Prohibited exports, imports, and sales to or from certain countries) by adding South Sudan in new paragraph (w). See 83 FR 6457 (February 14, 2018). The ITAR amendment reflected a determination by the Secretary of State that it was in the best interests of U.S. foreign policy to impose such restrictions in order to reflect the U.S. government's opposition to the trade of arms to South Sudan and its contribution to the conflict and humanitarian crisis in that country, promote the cessation of hostilities, and to reinforce a unified international response by aligning the United States with existing European Union restrictions on certain exports to South Sudan. As a consequence of the ITAR amendment, a policy of denial applies to applications for licenses or other approvals for the export of defense articles and defense services destined for South Sudan. A license or other approval may be issued on a case-by-case basis for six enumerated categories of defense articles and defense services, as set forth in ITAR § 126.1(w) (South Sudan).

BIS primarily implements such controls through Country Group D:5. Countries listed in Country Group D:5 are subject to additional restrictions in the EAR, including on de minimis U.S. content, license exception availability, and licensing policy for certain items. License applications for the export or reexport of items classified under 9x515 or “600 series” Export Control Classification Numbers to countries in Country Group D:5 are reviewed consistent with the policies in § 126.1 of the ITAR, as provided in paragraph (b)(1)(ii) of § 742.4 (National security) and paragraph (b)(1) of § 742.6 (Regional stability) of the EAR.

Consistent with new § 126.1(w) (South Sudan) of the ITAR, the BIS licensing policy for the export and reexport of 9x515 and “600 series” items on the Commerce Control List, Supp. No. 1 to part 774, destined for South Sudan is a policy of denial that recognizes six categories of case-by-case approval. See ITAR § 126.1(w)(1)-(6), which describes these categories in detail.

BIS amends Supplement No. 1 to Part 740 of the EAR to place “South Sudan, The Republic of”, in alphabetical order, in Country Group D:5.

1. Executive Orders 13563 and 12866 direct agencies to assess all costs and benefits of available regulatory alternatives and, if regulation is necessary, to select regulatory approaches that maximize net benefits (including potential economic, environmental, public health and safety effects, distributive impacts, and equity). Executive Order 13563 emphasizes the importance of quantifying both costs and benefits, of reducing costs, of harmonizing rules, and of promoting flexibility. This rule has been designated to be not a significant regulatory action, for purposes of Executive Order 12866. This rule is not subject to the requirements of E.O. 13771 (82 FR 9339, February 3, 2017) because it is not significant under Executive Order 12866.

2. Notwithstanding any other provision of law, no person is required to respond to, nor shall any person be subject to a penalty for failure to comply with, a collection of information subject to the requirements of the Paperwork Reduction Act of 1995 (44 U.S.C. 3501 et seq.) (PRA), unless that collection of information displays a currently valid OMB control number. This rule involves collections of information approved under OMB control number 0694-0088—Simplified Network Application Processing+ System (SNAP+) and the Multipurpose Export License Application, which carries an annual estimated burden of 31,833 hours; and 0694-0137—License Exceptions and Exclusions, which carries an annual estimated burden of 29,998. BIS believes that this rule will have no significant impact on those burdens.

Send comments regarding this burden estimate or any other aspect of this Start Printed Page 38023collection of information, including suggestions for reducing the burden, to Jasmeet K. Seehra, Office of Management and Budget, by email at jseehra@omb.eop.gov or by fax to (202) 395-7285.

3. This rule does not contain policies with Federalism implications as that term is defined under Executive Order 13132.

4. The provisions of the Administrative Procedure Act (5 U.S.C. 553) requiring notice of proposed rulemaking and the opportunity for public participation, and a delay in effective date, are inapplicable because this regulation involves a military or foreign affairs function of the United States (see 5 U.S.C. 553(a)(1)). This rule implements a necessary update of the status of South Sudan as a U.S. embargoed country, consistent with the prohibitions implemented in the ITAR by the Department of State. This rule also serves to prevent confusion by the public as to the current EAR export and reexport license requirements applicable to South Sudan. A delay in the effective date would frustrate the achievement of this goal. Further, no other law requires that a notice of proposed rulemaking and an opportunity for public comment be given for this rule. Because a notice of proposed rulemaking and an opportunity for public comment are not required to be given for this rule under 5 U.S.C. 553, or by any other law, the requirements of the Regulatory Flexibility Act (5 U.S.C. 601 et seq.) are not applicable.

Accordingly, part 740 of the Export Administration Regulations (15 CFR parts 730-774) is amended as follows:

1. The authority citation for part 740 continues to read as follows:

2. Amend Supplement No. 1 to Part 740 by adding, in alphabetical order, an entry for “South Sudan, Republic of” under “Country Group D” to read as follows:

SUPPLEMENT NO. 1 TO PART 740—COUNTRY GROUPS 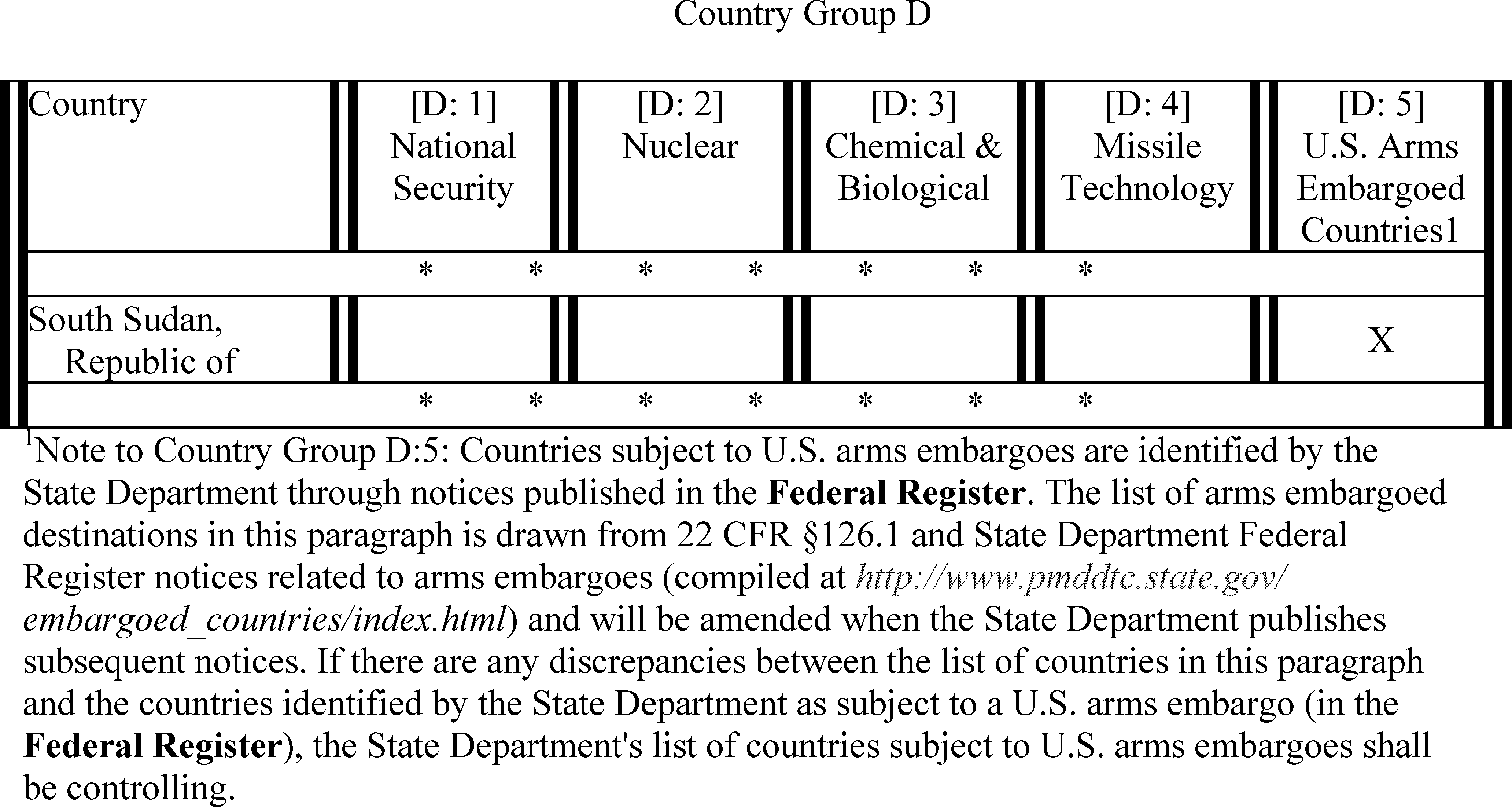