We must receive comments on this proposed AD by November 6, 2018.

You may examine the AD docket on the internet at http://www.regulations.gov by searching for and locating Docket No. FAA-2018-0336; or in person at Docket Operations between 9 a.m. and 5 p.m., Monday through Friday, except Federal holidays. The AD docket contains this proposed AD, the European Aviation Safety Agency (EASA) AD, the economic evaluation, any comments received, and other information. The street address for Docket Operations (telephone 800-647-5527) is in the ADDRESSES section. Comments will be available in the AD docket shortly after receipt.

We invite you to participate in this rulemaking by submitting written comments, data, or views. We also invite comments relating to the economic, environmental, energy, or federalism impacts that might result from adopting the proposals in this document. The most helpful comments reference a specific portion of the proposal, explain the reason for any recommended change, and include supporting data. To ensure the docket does not contain duplicate comments, commenters should send only one copy of written comments, or if comments are filed electronically, commenters should submit only one time.

We will file in the docket all comments that we receive, as well as a report summarizing each substantive public contact with FAA personnel concerning this proposed rulemaking. Before acting on this proposal, we will consider all comments we receive on or before the closing date for comments. Start Printed Page 45365We will consider comments filed after the comment period has closed if it is possible to do so without incurring expense or delay. We may change this proposal in light of the comments we receive.

EASA, which is the Technical Agent for the Member States of the European Union, has issued EASA AD No. 2017-0199, dated October 11, 2017, to correct an unsafe condition for Airbus Helicopters Model EC135P1, EC135P2, EC135P2+, EC135P3, EC135T1, EC135T2, EC135T2+, EC135T3, EC635P2+, EC635P3, EC635T1, EC635T2+, and EC635T3 helicopters. EASA advises of a report of a hook separating from the hoist cable. According to EASA, an investigation determined that failure of the internal retaining ring combined with a permanent compression set of the elastomeric energy absorber caused the separation. EASA states that this condition, if not corrected, could lead to the detachment of an external load or person from the hoist, possibly resulting in personal injury or injury to persons on the ground.

These helicopters have been approved by the aviation authority of Germany and are approved for operation in the United States. Pursuant to our bilateral agreement with Germany, EASA, its technical representative, has notified us of the unsafe condition described in its AD. We are proposing this AD because we evaluated all known relevant information and determined that an unsafe condition is likely to exist or develop on other products of the same type design.

We reviewed Goodrich Service Bulletin No. 44301-10-17, Revision 4, dated July 26, 2017. The Goodrich Service Bulletin is attached as an appendix to Airbus Helicopters Alert Service Bulletin No. ASB EC135-85A-069, Revision 0, dated August 2, 2017. This service information specifies an initial and repetitive inspections of the hook assembly and replacement of the retaining ring. If the inspections of elastomeric energy absorber detect a permanent compression set, this service information also specifies replacing the elastomeric energy absorber.

This service information is reasonably available because the interested parties have access to it through their normal course of business or by the means identified in the ADDRESSES section.

This proposed AD would require, within 90 hours time-in-service (TIS) and thereafter at intervals not to exceed 180 hours TIS, replacing the retaining ring and inspecting the elastometric energy absorber for a permanent compression set, and if necessary, replacing the elastometric energy absorber before the next hoist operation.

Differences Between This Proposed AD and the EASA AD

The EASA AD requires corrective actions in terms of months in service. This proposed AD would require compliance within 90 hours TIS and thereafter at intervals not to exceed 180 hours TIS. The EASA AD applies to Airbus Helicopters Model EC635P2+, EC635P3, EC635T1, EC635T2+, and EC635T3 helicopters. This proposed AD would not because these model helicopters have no FAA type certificate.

We consider this proposed AD to be an interim action. The design approval holder is currently developing a modification that will address the unsafe condition identified in this proposed AD. Once this modification is developed, approved, and available, we might consider additional rulemaking.

We estimate that this proposed AD would affect 278 helicopters of U.S. Registry and that labor costs average $85 per work-hour. Based on these estimates, we expect the following costs:

For the reasons discussed, I certify this proposed regulation:

1. Is not a “significant regulatory action” under Executive Order 12866;

3. Will not affect intrastate aviation in Alaska to the extent that it justifies making a regulatory distinction; and

4. Will not have a significant economic impact, positive or negative, on a substantial number of small entities under the criteria of the Regulatory Flexibility Act.

We prepared an economic evaluation of the estimated costs to comply with this proposed AD and placed it in the AD docket. 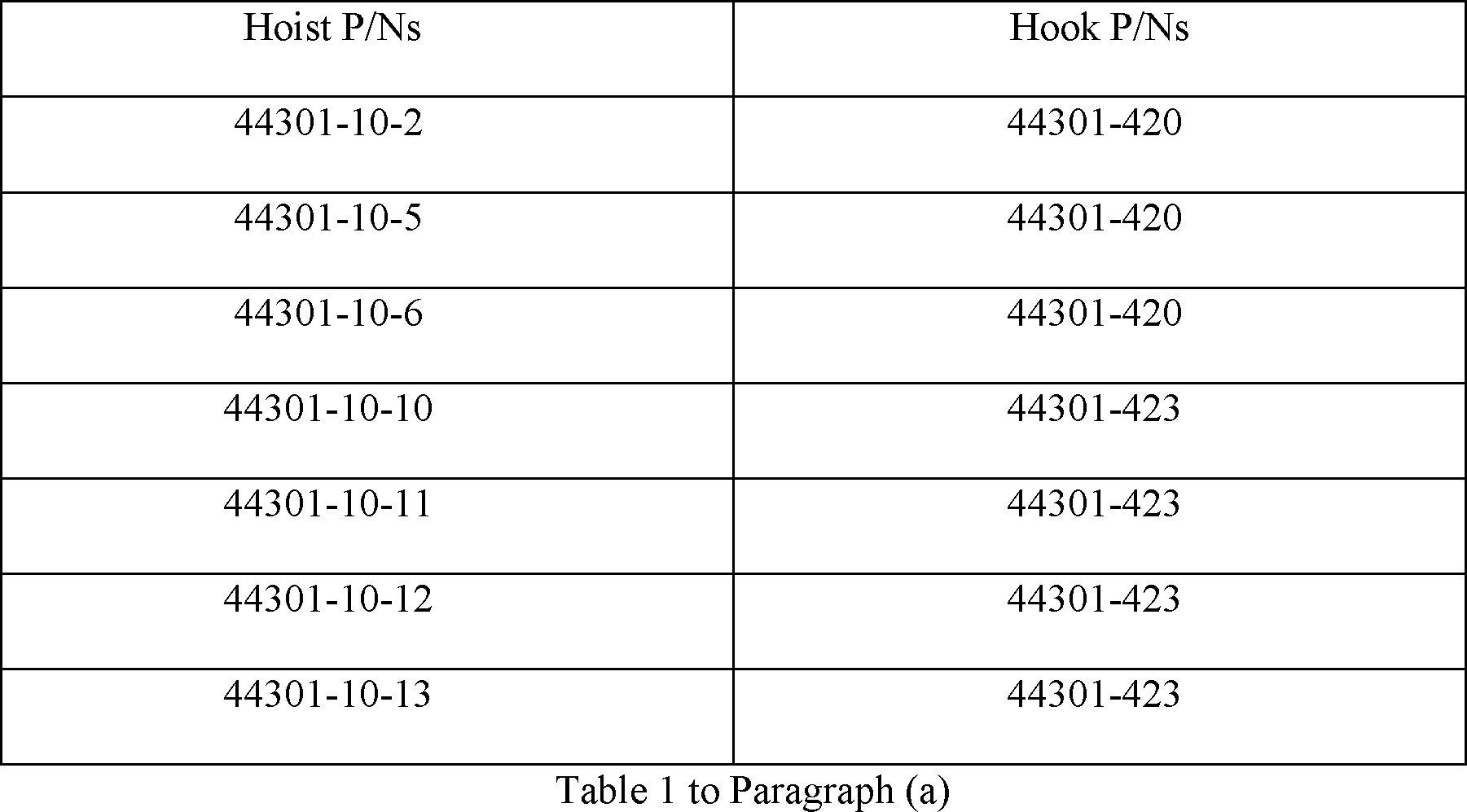 This AD defines the unsafe condition as detachment of a hook from a hoist cable resulting in in-flight failure of the hoist, which could result in injury to persons being lifted.

Within 90 hours time-in-service (TIS) and thereafter at intervals not to exceed 180 hours TIS:

Special flight permits may be permitted provided the hoist is not used.

The subject of this AD is addressed in European Aviation Safety Agency (EASA) AD No. 2017-0199, dated October 11, 2017. You may view the EASA AD on the internet at http://www.regulations.gov in the AD Docket.