This document amends regulations listing the current addresses and describing the geographic jurisdictions of the Federal Labor Relations Authority, General Counsel of the Federal Labor Relations Authority, and the Federal Service Impasses Panel. These changes reflect the closing of the Dallas Regional Office and changes to the geographical jurisdictions of the Atlanta, Chicago, and Denver Regional Directors.

Effective January 28, 1980, the Authority and the General Counsel published, at 45 FR 3482, January 17, 1980, final rules and regulations to govern the processing of cases by the Authority and the General Counsel under chapter 71 of title 5 of the United States Code. These rules and regulations are required by title VII of the Civil Service Reform Act of 1978 and are set forth in 5 CFR chapter XIV (2018).

This amendment updates paragraphs (d) and (f) of Appendix A to 5 CFR chapter XIV to reflect the new organizational structure by removing the Dallas Regional Office from the list of current addresses, telephone numbers, and fax numbers of the Authority's Regional Offices and by revising the geographical jurisdictions of the Federal Labor Relations Authority. As this rule pertains to agency organization, procedure, or practice, it is exempt from prior notice and public comment pursuant to 5 U.S.C. 553(b)(A). For this same reason, pursuant to 5 U.S.C. 553(d)(3), the Authority finds that good cause exists for not providing a more delayed effective date. This type of action is also exempt from review under Executive Orders 12866 (58 FR 51735, October 4, 1993), 13563 (76 FR 3821, January 21, 2011), and 13771 (82 FR 9339, February 3, 2017).

For the reasons set forth in the preamble and under the authority of 5 U.S.C. 7134, the authority amends 5 CFR chapter XIV as follows:

(f) The geographic jurisdictions of the Regional Directors of the Federal Labor Relations Authority are as follows:

For the Federal Labor Relations Authority.

The following appendix will not appear in the Code of Federal Regulations:

The Authority voted in January 2018 to close the Boston and Dallas Regional Offices. At that time, the Authority considered arguments echoing those of Member DuBester. We concluded, however, that consolidating the FLRA's Regional Office structure would husband the FLRA's budgetary and operational resources and best serve the labor-management relations community. 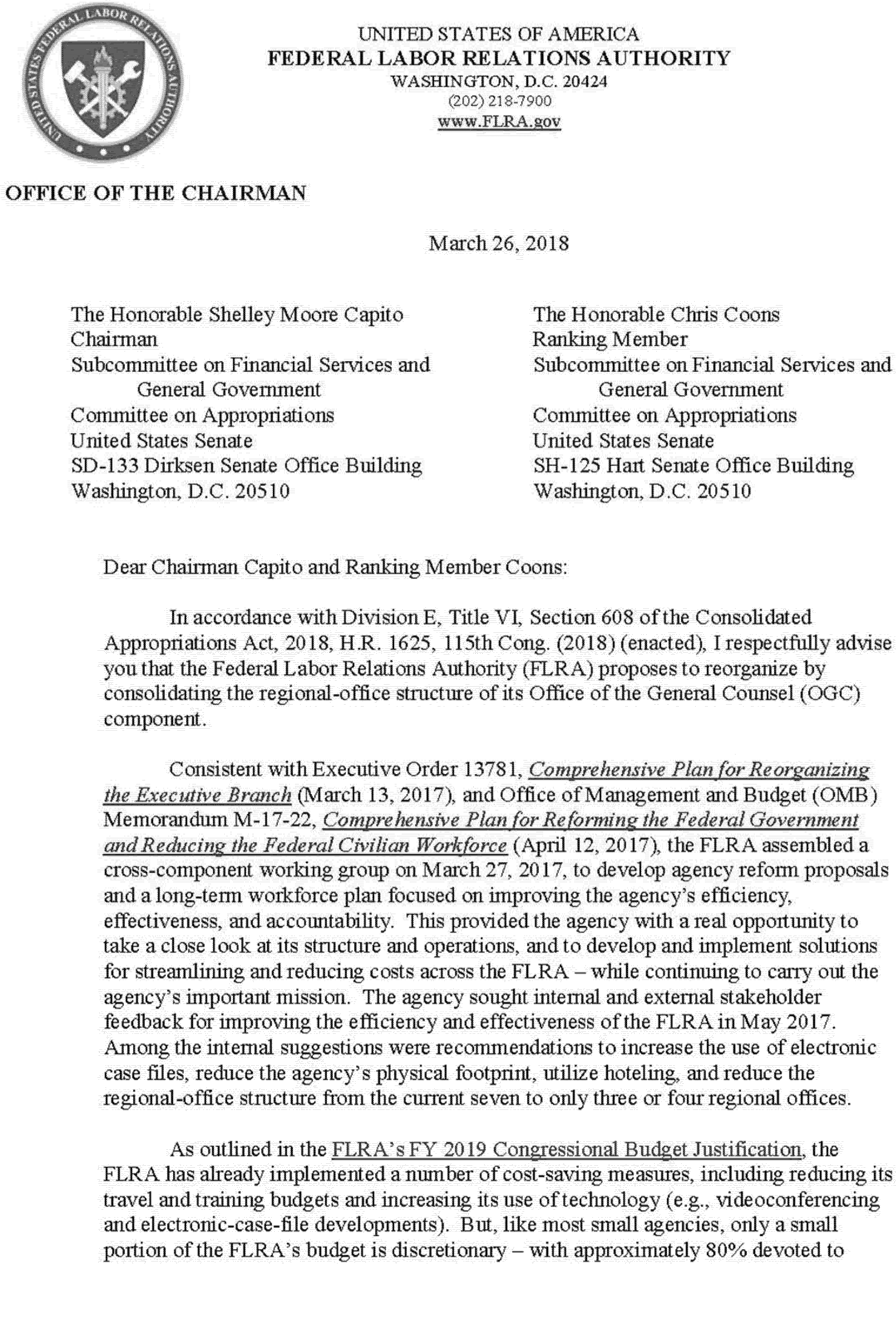 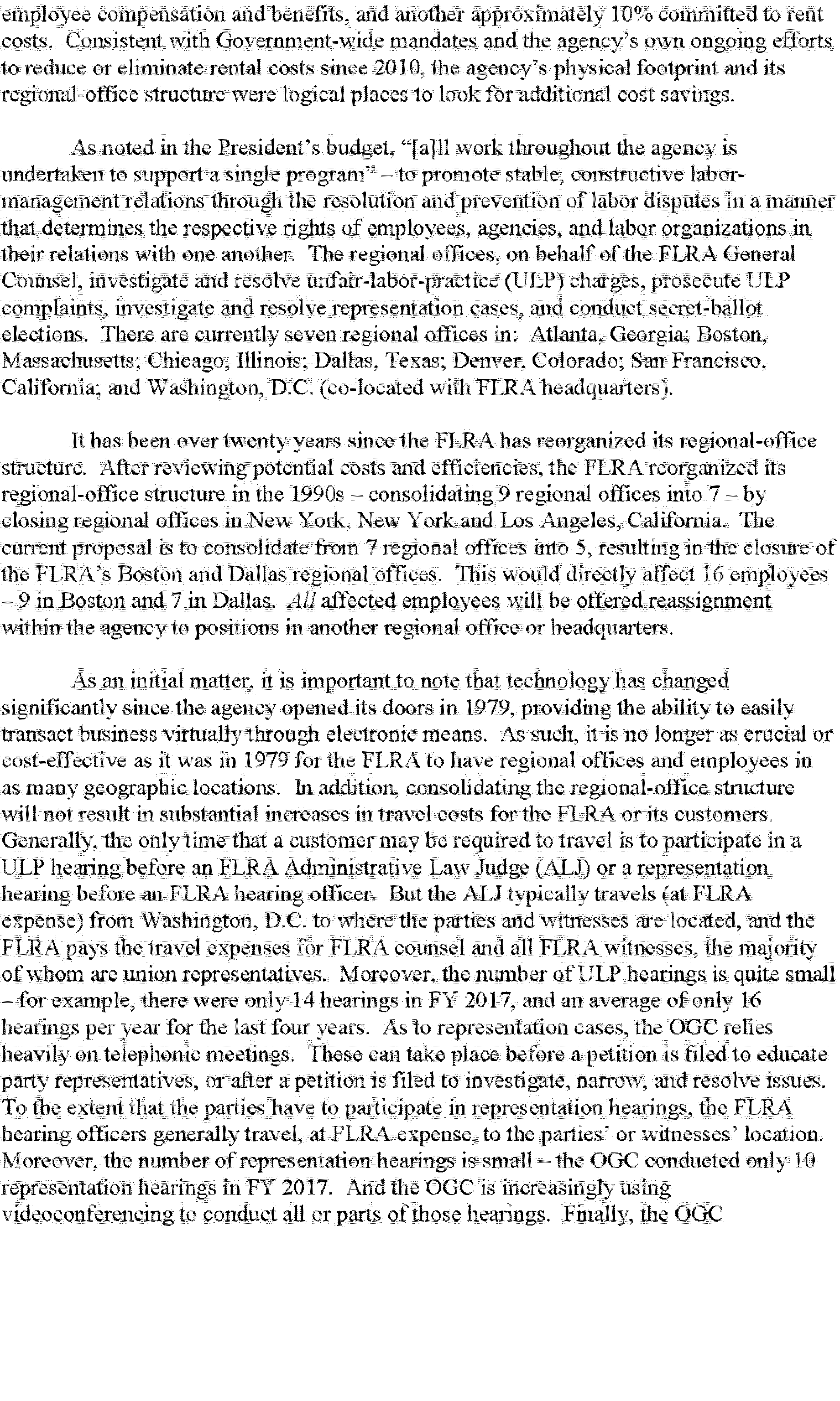 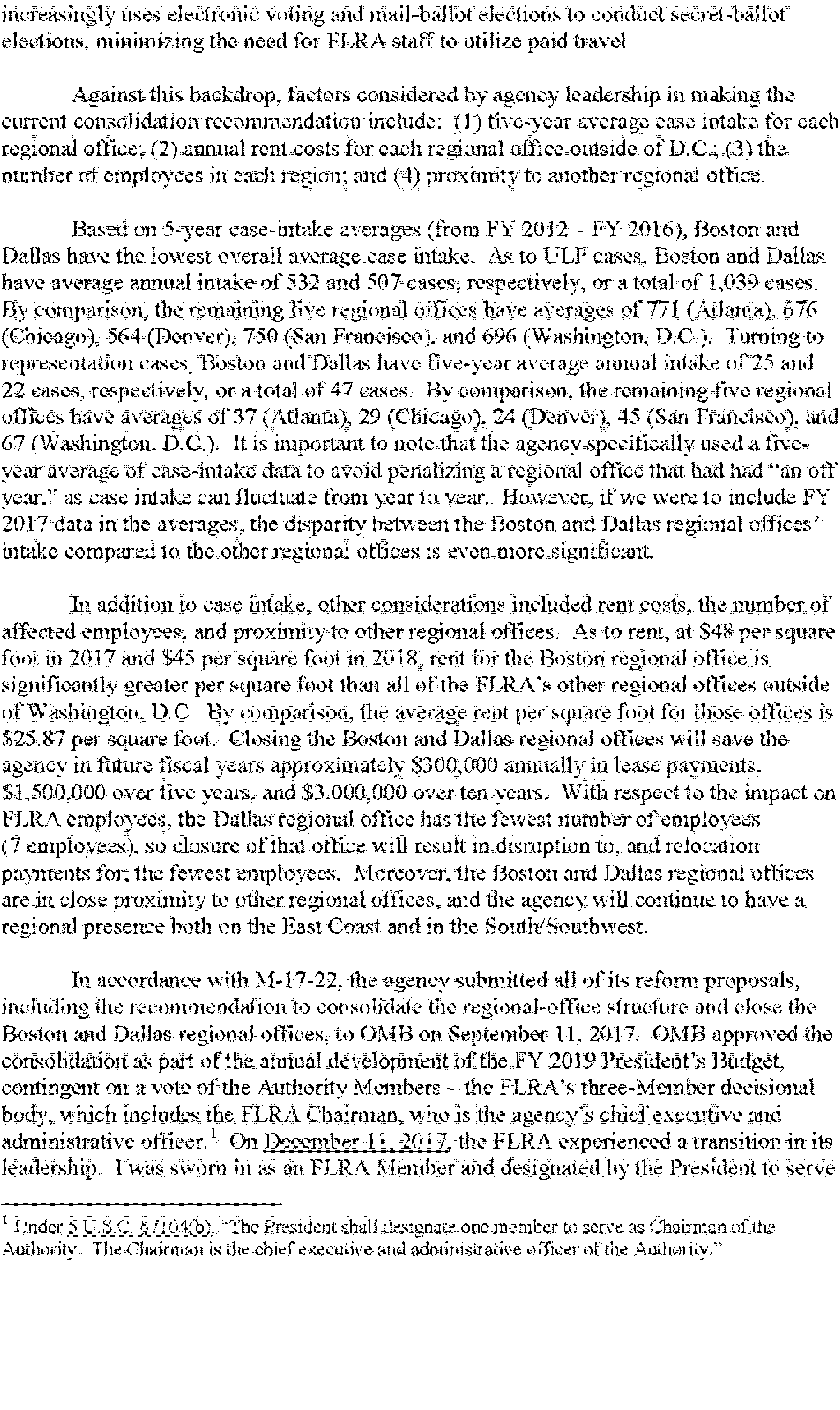 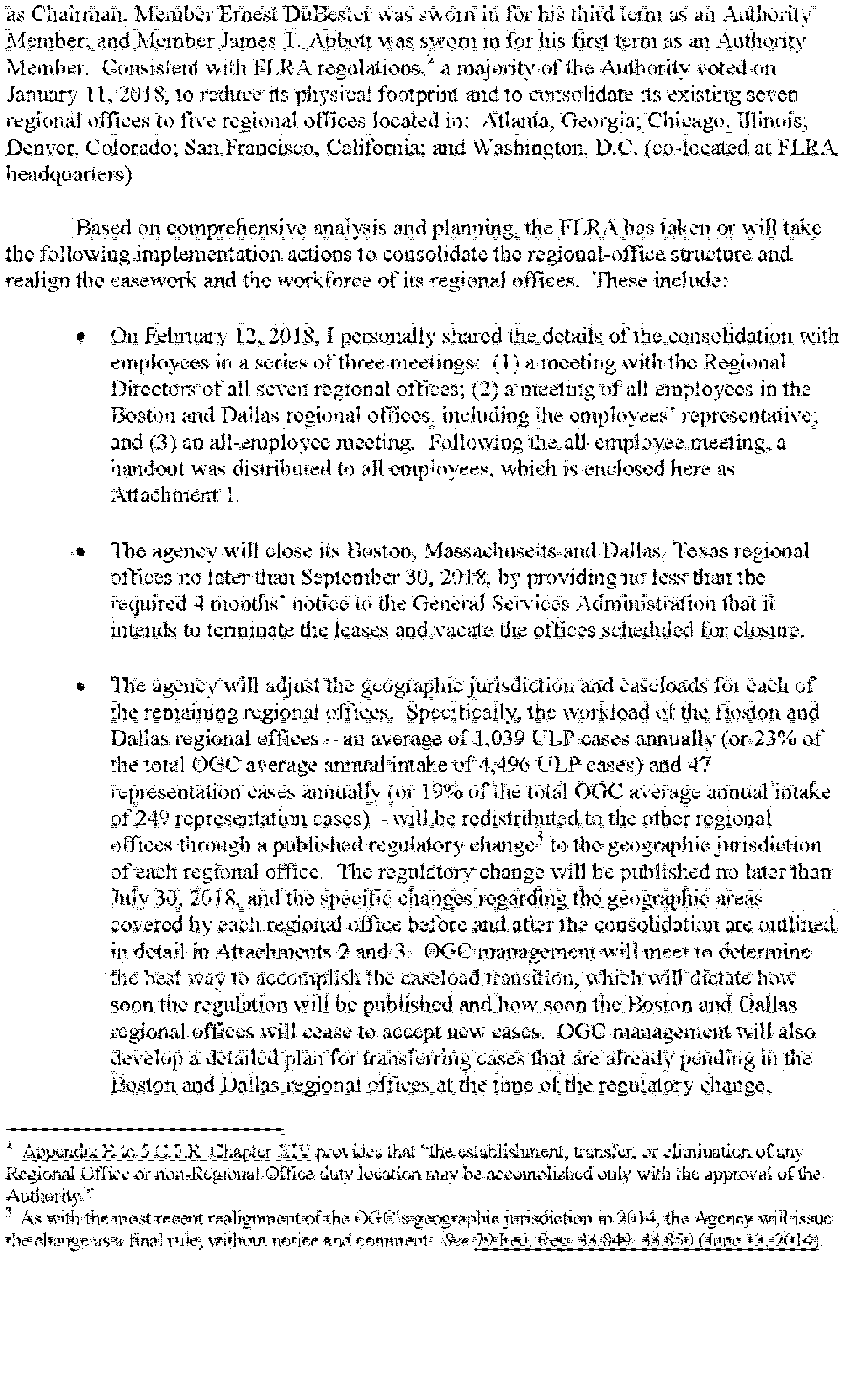 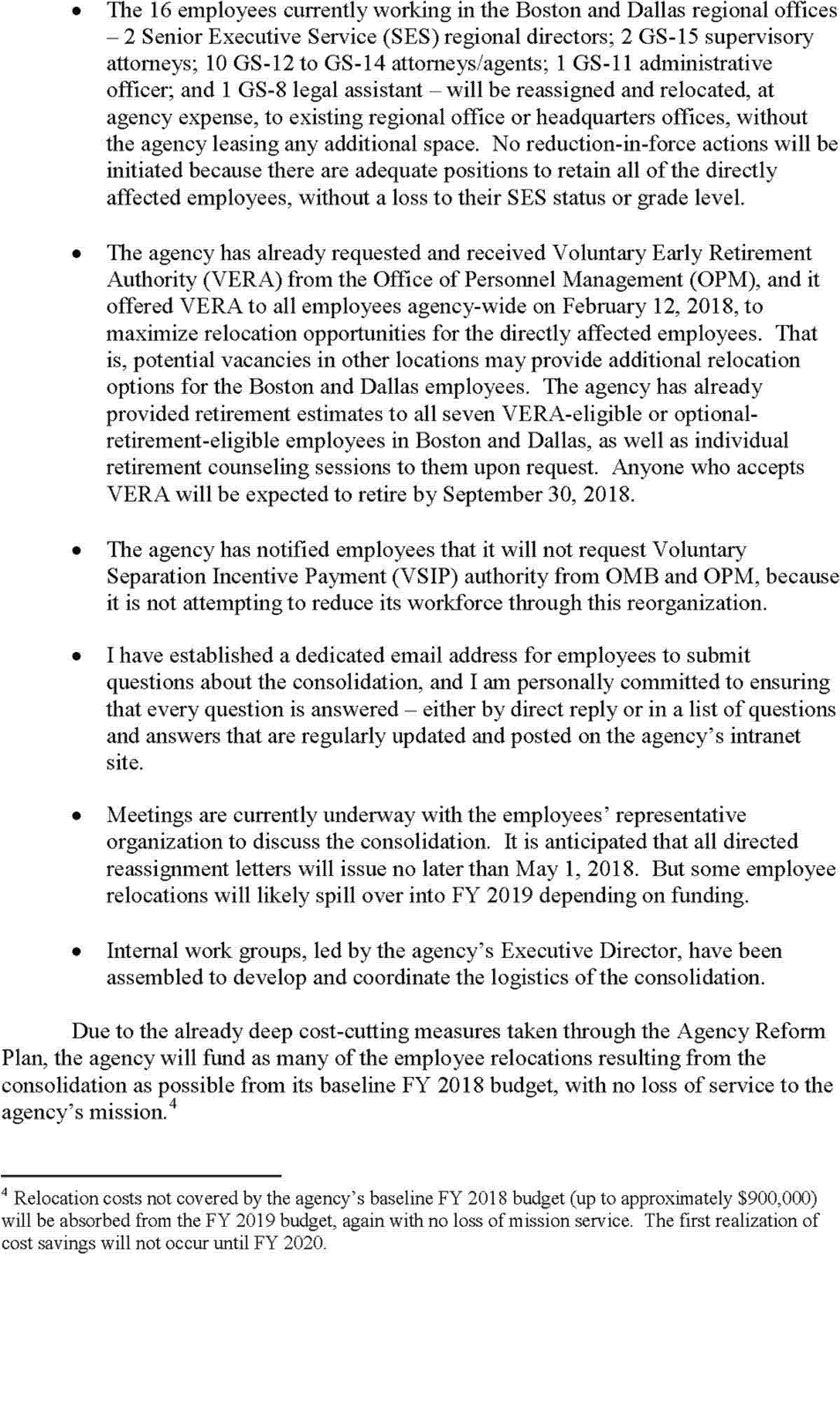 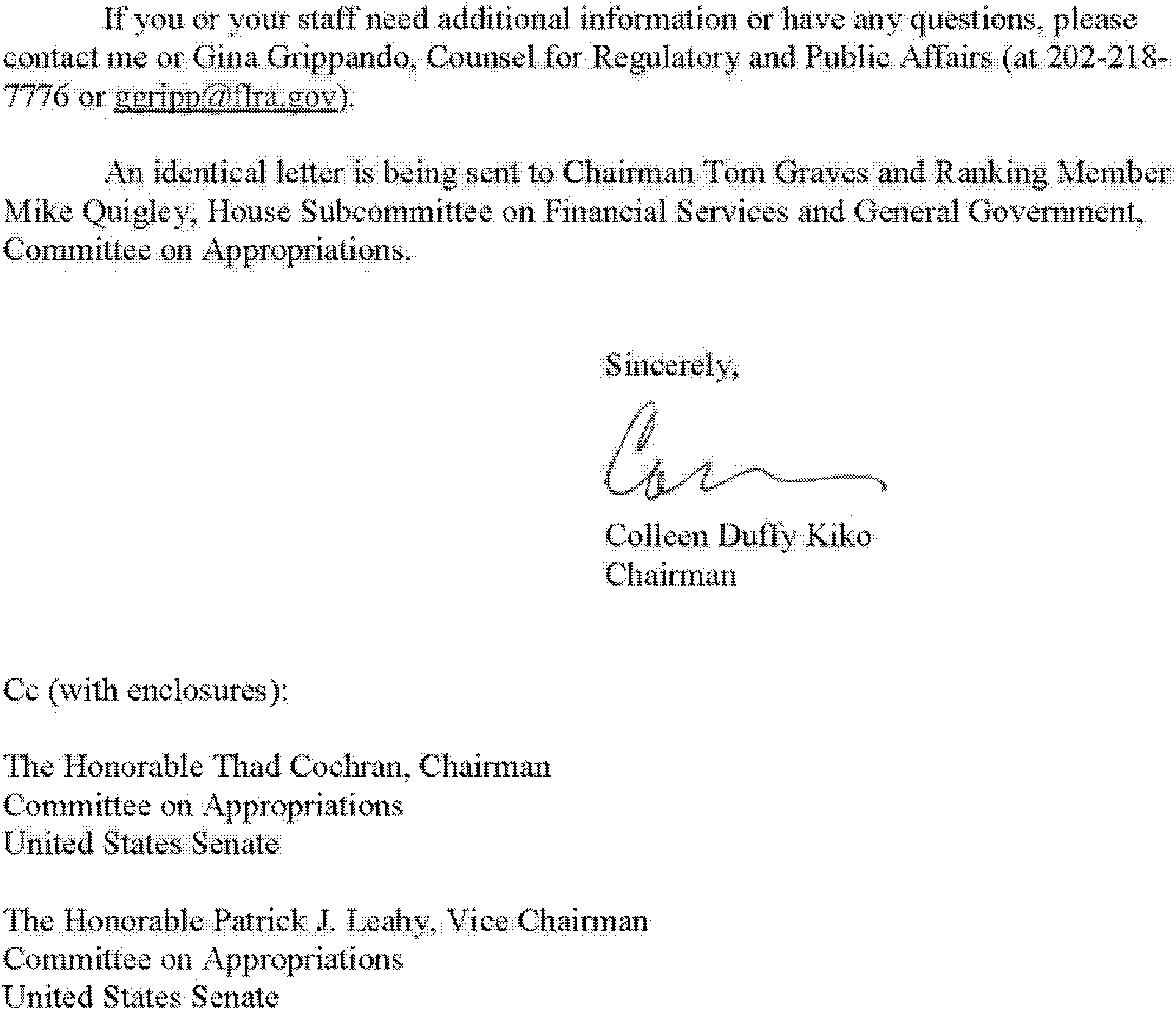 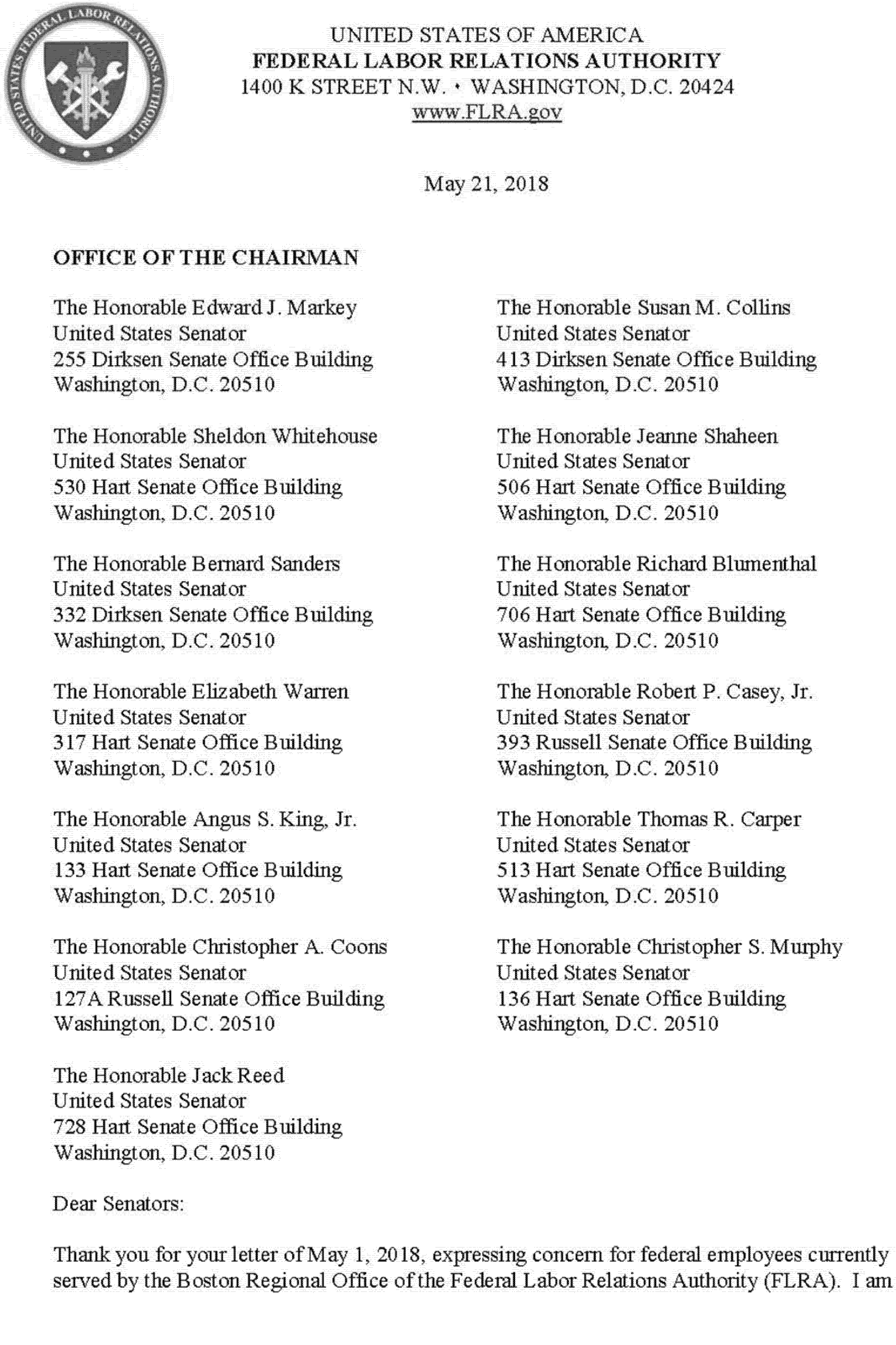 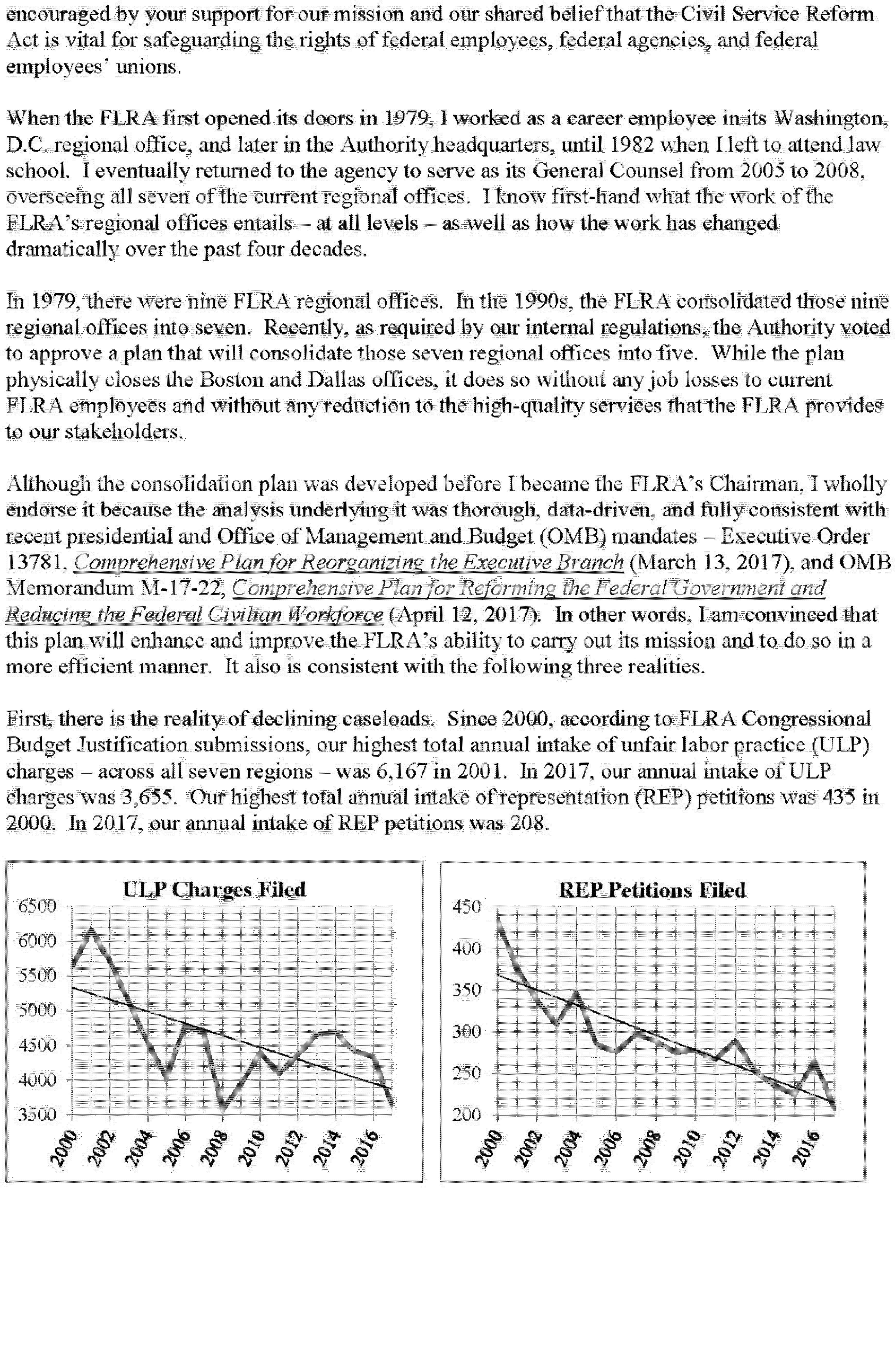 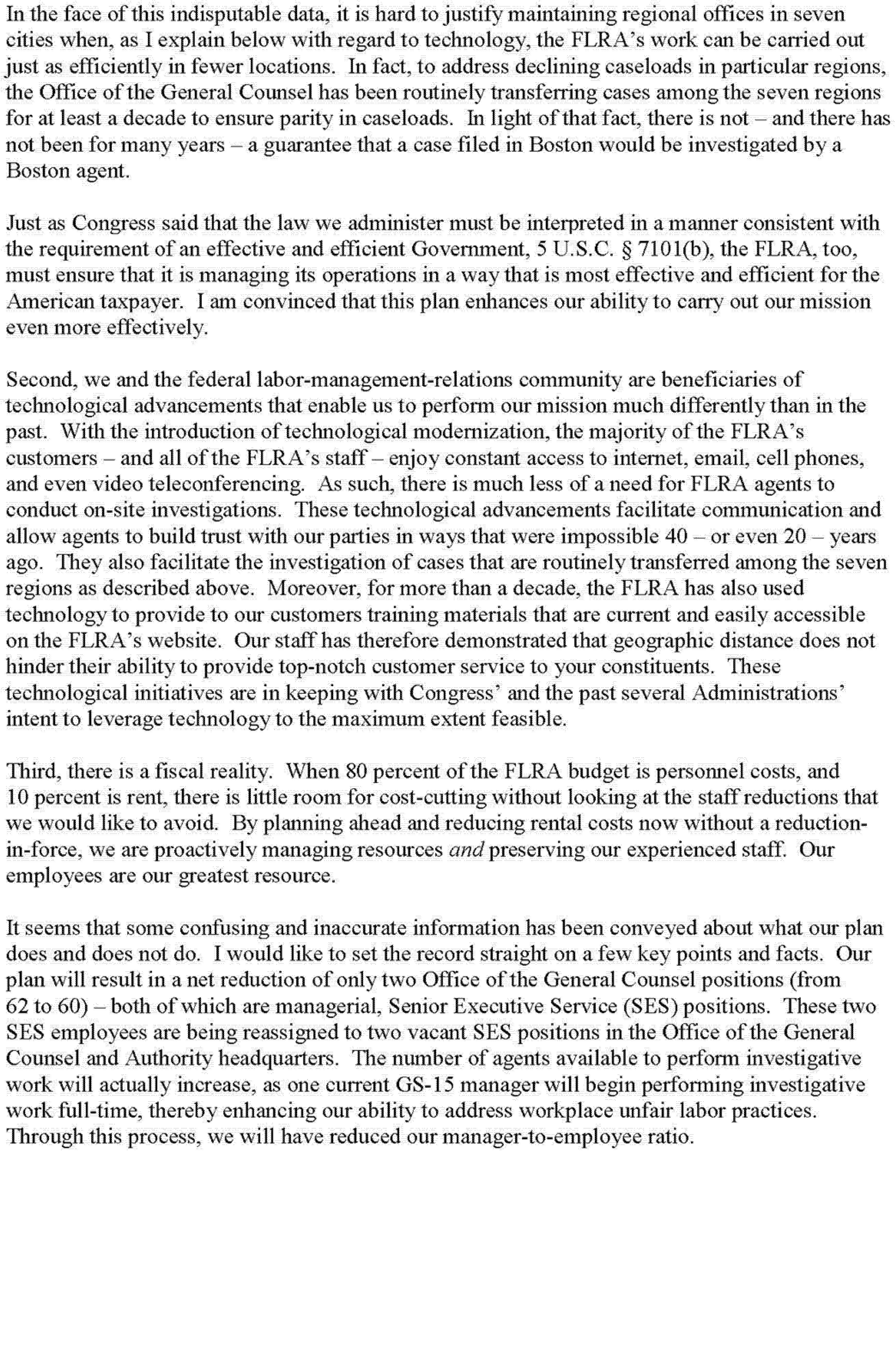 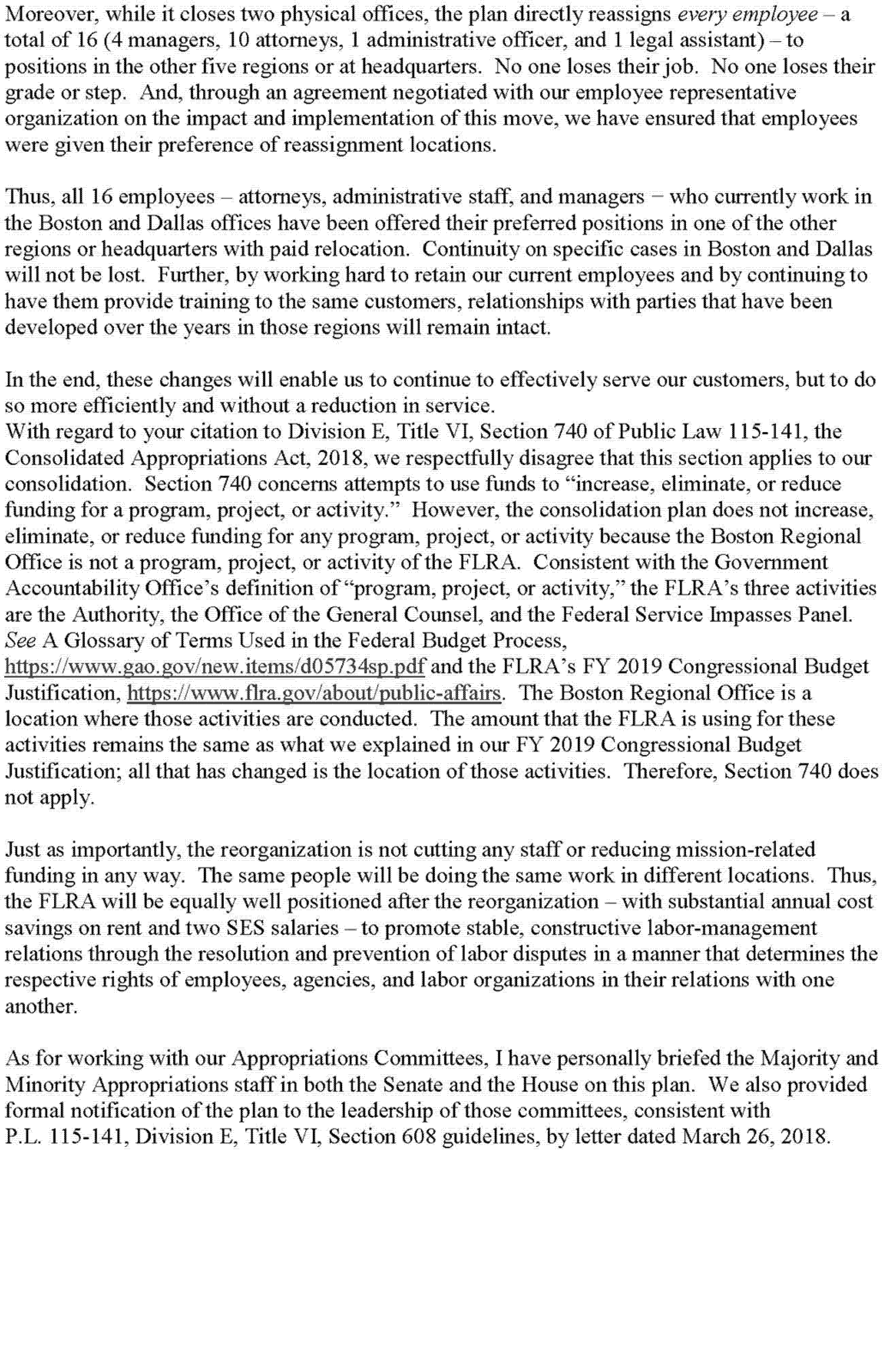 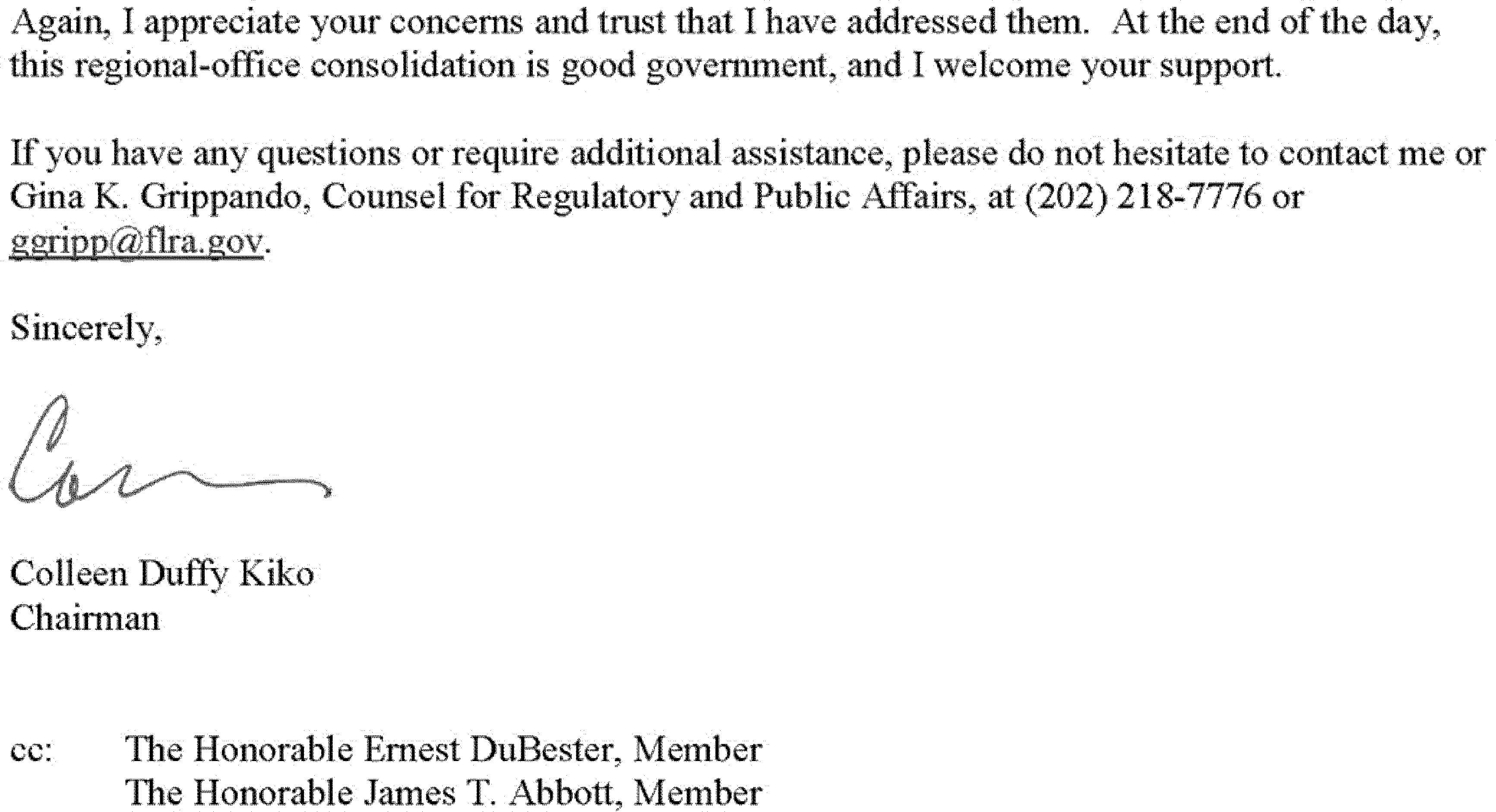 I strongly disagree with the decision to close the FLRA's Dallas Regional Office at the end of this fiscal year and the Boston Regional Office in November 2018. My opposition to these regional office closures is based in significant part on the perspective gained during my extensive experience in government.

In that respect, I have served over nine years as a Member of the FLRA. For most of 2013, the first year of sequestration, I served as the FLRA's Chairman. I also had the privilege of serving for eight years as the Chairman (and Member) of another federal labor-management relations agency—the National Mediation Board. In these 17 years of service, I have always been mindful of the need for efficiencies that could improve government performance. Similarly, I have always tried to exercise leadership in a fiscally responsible manner.

With those thoughts in mind, the decision to close the Dallas and Boston Offices is unjustified, unwarranted, and will undermine the FLRA's ability to perform its mission. Beyond my grave concerns about this decision's substantive impact, I also take serious issue with the circumstances surrounding the process by which this decision was made and implemented.

The FLRA administers the labor-management relations program for over two million non-Postal, federal employees worldwide, including civilians in the Armed Forces. Until this decision, within its Office of the General Counsel (OGC), the FLRA had seven Regional Offices around the country, including one at its Washington, DC headquarters. These seven offices served the entire country, and overseas locations where federal employees work.

Ostensibly, the decision to close the Dallas and Boston Offices is responsive to Executive Order No. 13781, Comprehensive Plan for Reorganizing the Executive Branch (March 13, 2017), and the Office of Management and Budget (OMB) Memorandum M-17-22 (April 12, 2017). These directives ask federal agencies to consider organizational changes that could be made to effect operational savings. But it is evident that the purpose is not simply to show a cost savings without regard to an agency's mission and its delivery of services to stakeholders. To the contrary, agencies are to implement changes that will “dramatically improve effectiveness and efficiency of government.”

The decision to close the Dallas and Boston Offices fails this test. It was made without thoughtful consideration of the FLRA's mission or the nature of its work to perform that mission. And significantly, it ignores the considerable sacrifices made by the FLRA and its employees in recent years which have already saved the government tens of millions of dollars.

Concerning mission effectiveness, as the attached letter to FLRA Chairman Kiko (May 1, 2018) from 13 U.S. Senators representing a quarter of a million federal employees currently served by the Boston Office indicates, its closure will “place FLRA Staff farther away from those who rely on their services.” Indeed, federal agencies and federal employees in the Northeast, all the way to the tip of Maine, will have to come to Washington, DC to address their rights and responsibilities. And, as the Senators' letter indicates, the decision is being made without Congressional oversight. Is this really the direction that we want to go?

Analogous concerns apply to the Dallas Office closure. With that closure, the FLRA is closing the Regional Office located in the state which has the second largest number of federal employees outside of the Washington, DC Metropolitan area. Considered in this context alone, the decision defies logic.

This is especially true given that the decision was made without any apparent outreach to stakeholders. Any serious consideration of the FLRA's mission and its delivery of services to the parties demands that there be some kind of outreach BEFORE such a decision was made.

Since that time, the FLRA has implemented many additional cost-saving measures and efficiencies. This includes reducing the size of its headquarters by about 12,000 square feet in FY 2014, eliminating an entire floor. And, the FLRA similarly reduced its space in five Regional Offices (Chicago, Denver, San Francisco, as well as Dallas and Boston).

In the last year, moreover, the FLRA has eliminated at least 12 more FTEs, about 10% of its already small workforce. Elimination of the Dallas and Boston Offices will result in a further reduction of FTEs. This means that, since FY 2000, the FLRA will have eliminated over 55% of its employees.

As the attached retired-RDs letter suggests, after these repeated sacrifices, the severity of this additional action to close Dallas and Boston, without good reason, is demoralizing and impairs the FLRA's ability to perform its mission. It should be remembered that, in FY 2009, after the 45% reduction in employees, the FLRA was ranked dead last (32nd of 32 similarly-sized agencies) in the Partnership for Public Services “Best Places to Work” rankings. But in recent years, at least until last year, though implementing many cost-Start Printed Page 46362saving measures and innovative practices to promote efficiencies, the FLRA has climbed to a #1 ranking in most categories of the Best Places to Work Rankings, and has ranked in the top five overall for several years. With elimination of the Dallas and Boston Offices, it is questionable whether this will continue.

What a shame. Nobody knows better than OMB (and Congress) the recent record of the FLRA in saving the government significant dollars. Sometimes, after such repeated sacrifices, a small agency like the FLRA, with a relatively modest budget, has become “right-sized.” Before elimination of the Dallas and Boston Offices, the FLRA was already the optimal size to perform its mission effectively and efficiently.

In addition to disregarding the FLRA's repeated fiscal sacrifices, the decision to close Dallas and Boston fails to consider thoughtfully the substantial mission-related value of Regional Offices being located where FLRA staff is more readily accessible to the parties. Again, as the retired-RDs letter suggests, this value has been “demonstrated again and again over the years.”

Certainly, a value is provided through “[r]egularly scheduled regional training presentations” which have become “an established resource to both labor and management representatives, many of whom could not travel to Washington DC or other distant cities.” In the last 10 years, the FLRA has provided training to thousands of FLRA stakeholders at Regional Office sites. And, by facilitating opportunities for the parties to meet and interact with Regional Office Staff, the FLRA's credibility and effectiveness is enhanced.

This is particularly true, and important, regarding access to our RDs, who are FLRA decision-makers. Access to, and interaction with, RDs by the federal sector labor-management community, not only builds trust in the FLRA's operations, but also promotes early settlements which produce real cost savings.

Apparently, the FLRA Members supporting the closures do not believe that this value still exists. Rather, it is suggested that technology has changed the nature of Regional Office work. In other words, it does not matter where you are. As long as you have a computer, a fax, and a telephone, you can be on top of a mountain anywhere in the U.S.A.

This suggestion is little more than a fabrication. The FLRA is in the business of labor-management relations. As is often said, the often overlooked word in that phrase is “relations.” Constructive relationships require direct human interaction. And, notwithstanding rapid advances in technology, direct human interaction will continue to be a vital element in building constructive labor-management relationships for the foreseeable future.

And, finally, in a related sense, now is the worst time to downsize further a dispute-resolution agency like the FLRA. While the FLRA is a small agency, accomplishing its mission, including timely, quality, and impartial resolution of labor-management disputes, is critical to promoting effective and efficient performance at EVERY federal agency under its jurisdiction. In other words, the FLRA's successful mission performance has a positive rippling effect government-wide.

Given the current effort to streamline federal government agencies, there is very likely to be an increase in the number of grievances and labor-management disputes. Viewed against this background, it is the wrong time to cut further the size and resources of a small dispute-resolution agency like the FLRA—particularly given its many sacrifices and practice of fiscal responsibility in recent years.

Indeed, considering the adverse impact on the FLRA's ability to perform its mission, the significant loss of quality employees, and the number of silent people who know better, the decision to close the Dallas and Boston Regional Offices is not just a shame—it is a crying shame. 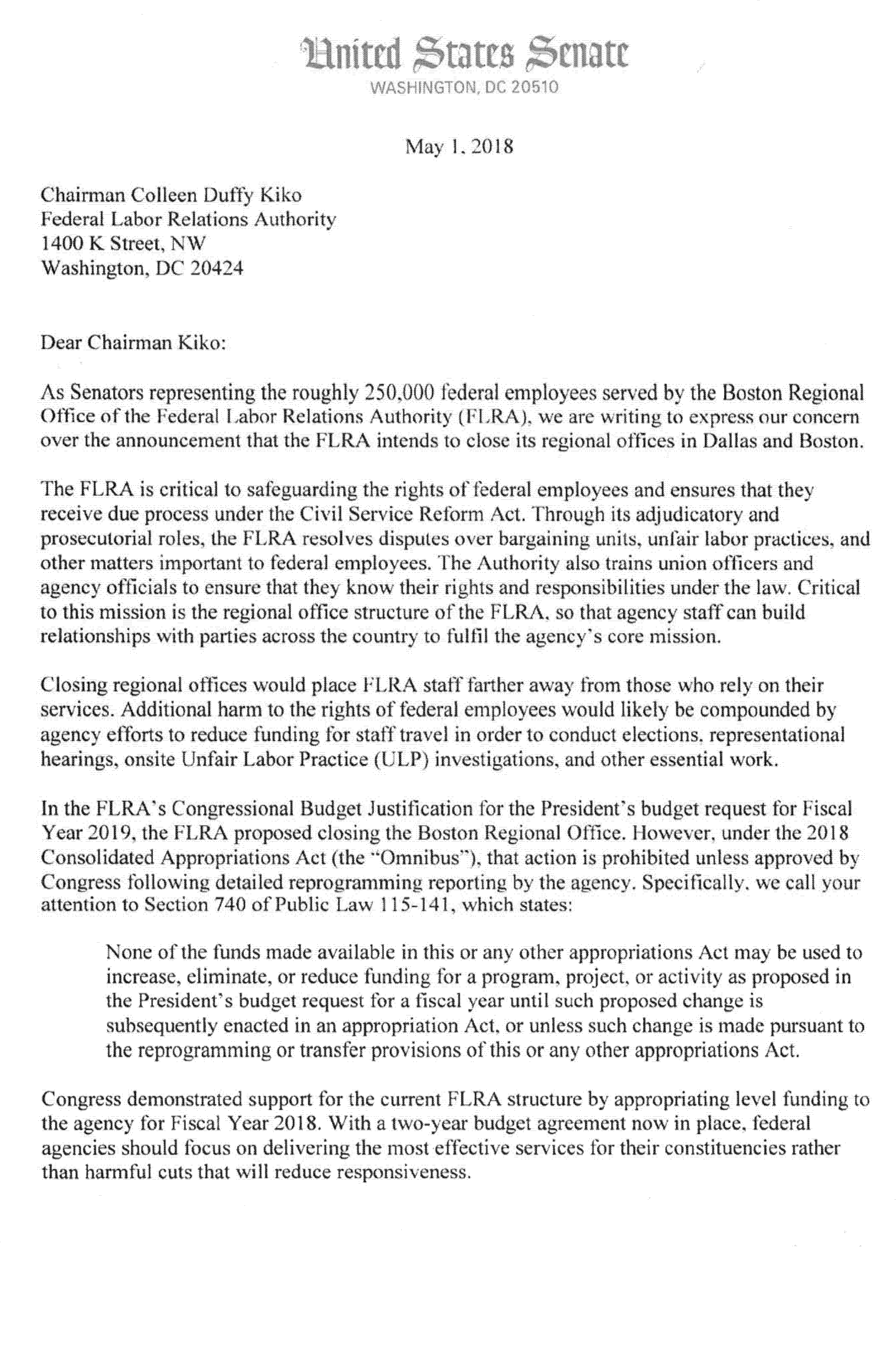 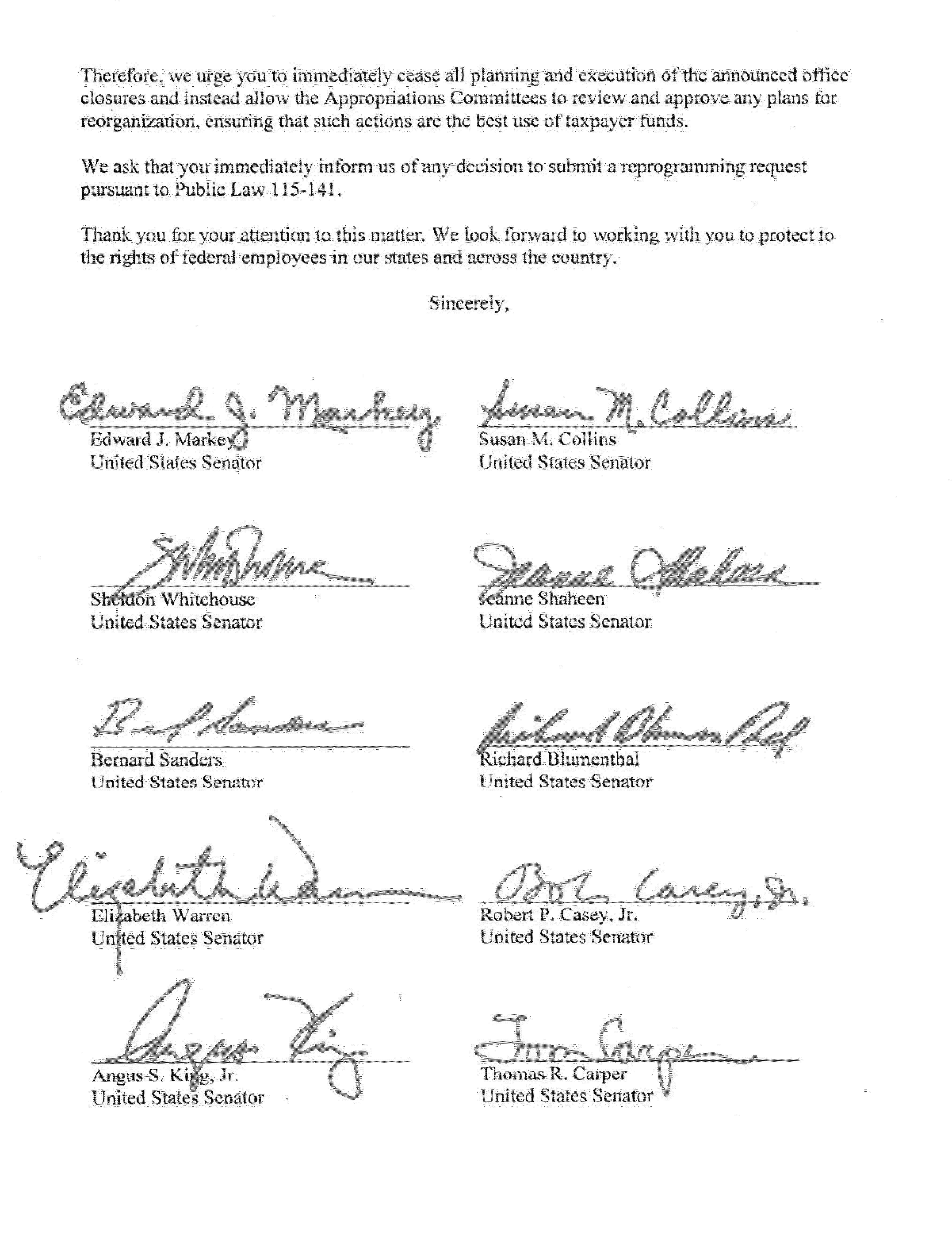 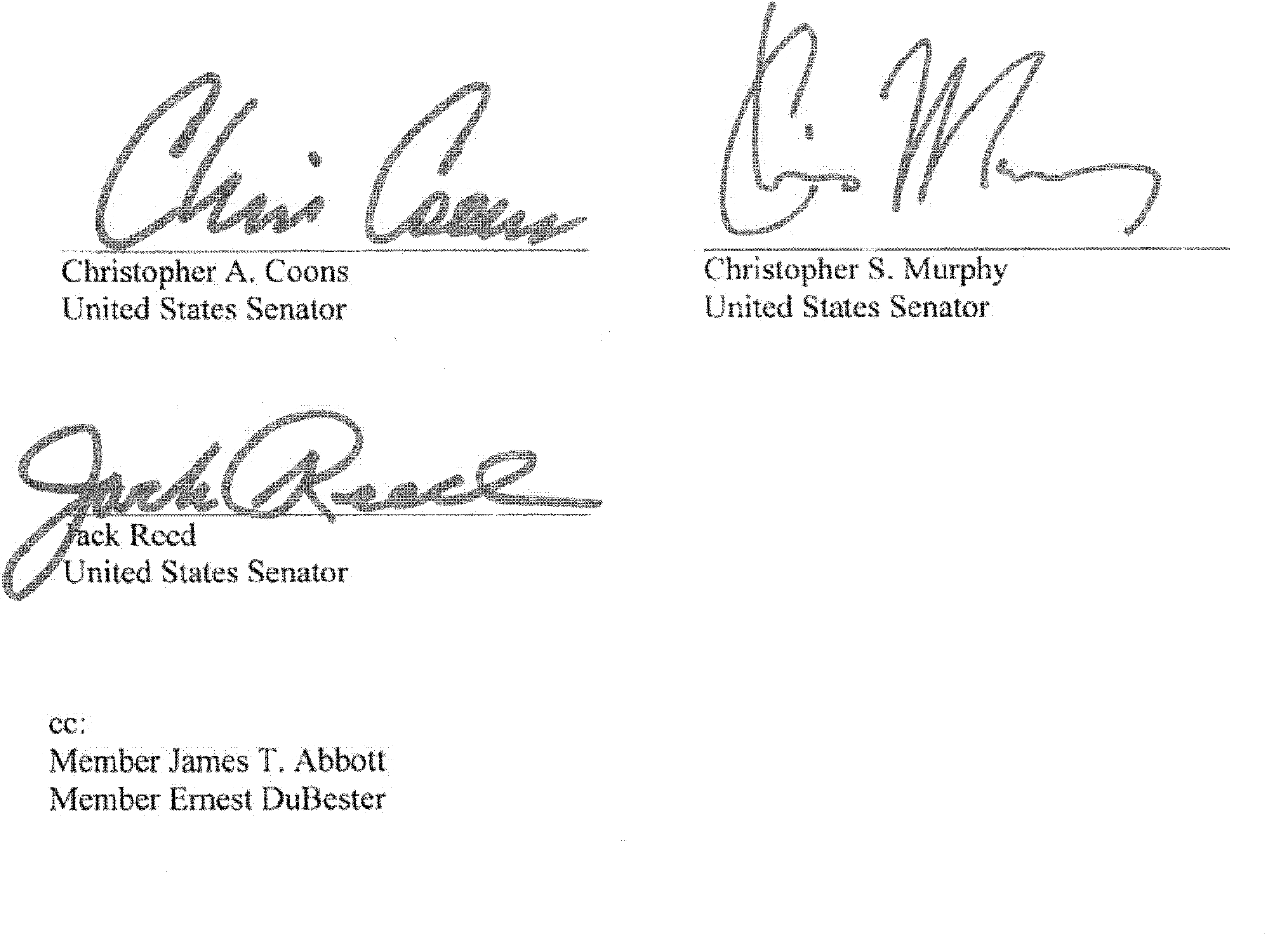 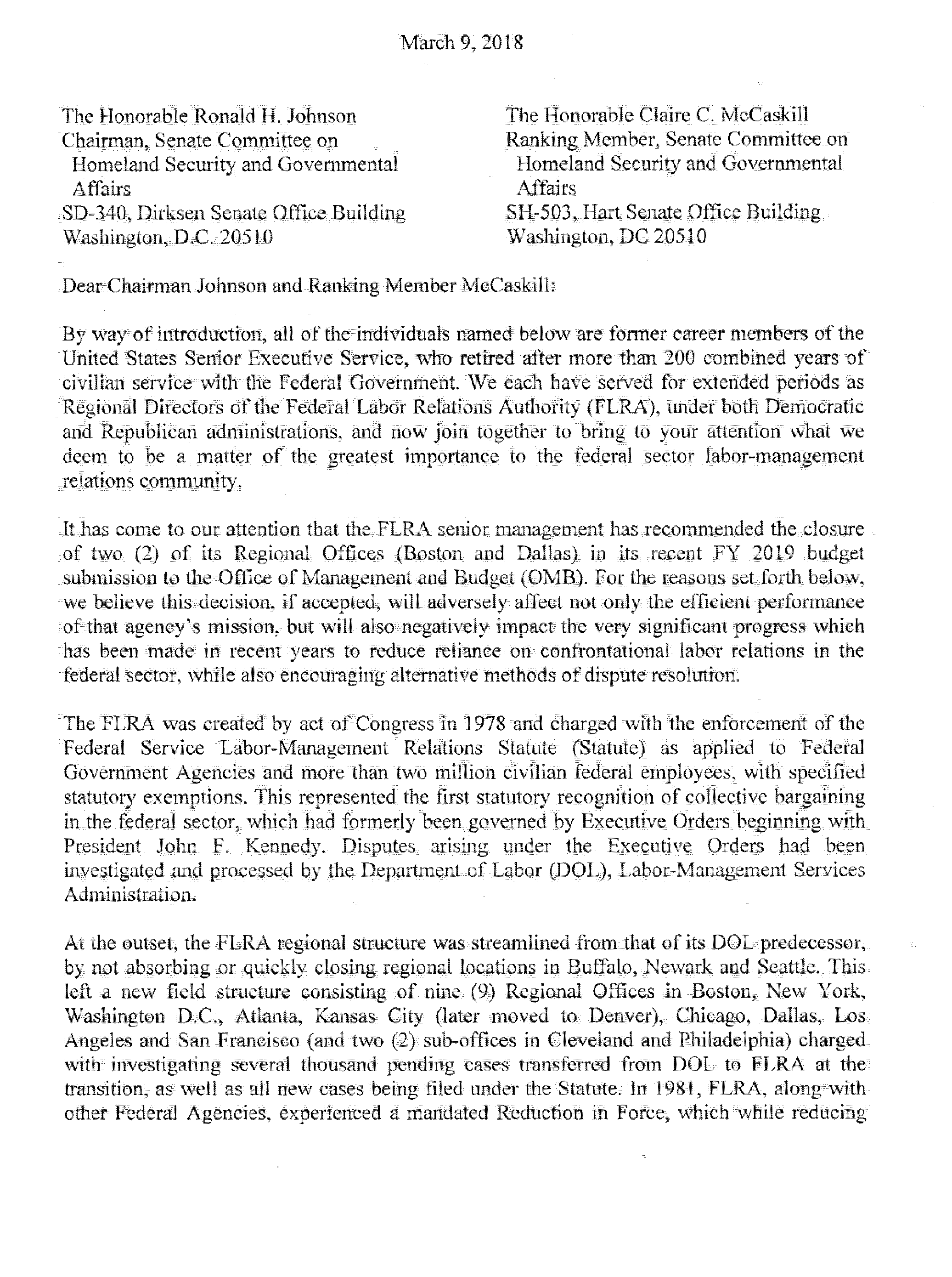 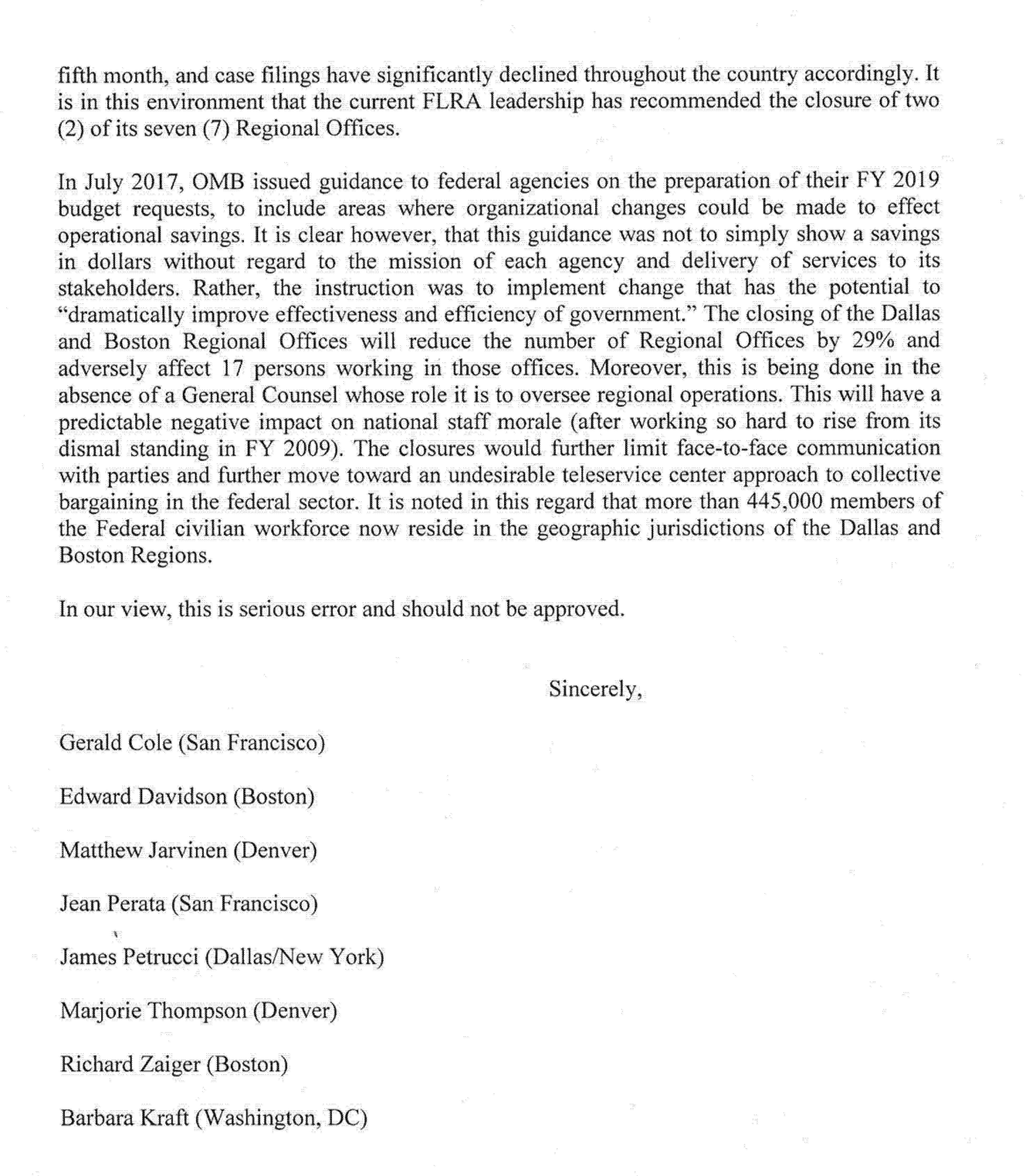