We are adopting a new airworthiness directive (AD) for certain Textron Aviation, Inc. (type certificate previously held by Cessna Aircraft Company) Models 525, 525A, and 525B airplanes with Tamarack active load alleviation system (ATLAS) winglets installed in accordance with Supplemental Type Certificate (STC) SA03842NY. This AD results from mandatory continuing airworthiness information (MCAI) issued by the aviation authority of another country to identify and correct an unsafe condition on an aviation product. The MCAI describes the unsafe condition as malfunction of the ATLAS. We are issuing this AD to require actions to address the unsafe condition on these products.

You may examine the AD docket on the internet at http://www.regulations.gov by searching for and locating Docket No. FAA-2019-0350; or in person at Docket Operations between 9 a.m. and 5 p.m., Monday through Friday, except Federal holidays. The AD docket contains this AD, the regulatory evaluation, any comments received, and other information. The street address for Docket Operations (telephone (800) 647-5527) is in the ADDRESSES section. Comments will be available in the AD docket shortly after receipt.

The European Aviation Safety Agency (EASA), which is the Technical Agent for the Member States of the European Community, has issued EASA AD No.: 2019-0086-E, dated April 19, 2019 (referred to after this as “the MCAI”), to correct an unsafe condition for Textron Aviation, Inc. Models 525, 525A, and 525B airplanes with Tamarack ATLAS winglets installed in accordance with STC SA03842NY. The MCAI states:

The active load alleviation system (ATLAS), when operational, deflects the Tamarack active control surfaces (TACS) on the outboard wings. Recently, occurrences have been reported in which ATLAS appears to have malfunctioned, causing upset events where, in some cases, the pilots had difficulty to recover the aeroplane to safe flight. Investigation continues to determine the cause(s) for the reported events.

This condition, if not corrected, could lead to loss of control of the aeroplane.

To address this potential unsafe condition, Cranfield Aerospace Solutions have issued the [service bulletin] SB, providing instructions to pull and collar the ATLAS circuit breaker, to make TACS immovable and to amend the applicable AFMS.

This [EASA] AD is an interim action and further AD action may follow.

The National Transportation Safety Board (NTSB) is investigating a fatal accident involving a Model 525 airplane with the ATLAS STC installed. The NTSB investigation focuses on the role the ATLAS may have played in the accident. In addition to the accident, five incidents of aircraft uncommanded roll events with the ATLAS activated have been reported to EASA and the FAA. In each incident, the pilot was able to recover from the event and land the aircraft safely. You may examine the MCAI on the internet at http://www.regulations.gov by searching for and locating Docket No. FAA-2019-0350.

FAA's Determination and Requirements of the AD

This product has been approved by the aviation authority of another country, and is approved for operation in the United States. Pursuant to our bilateral agreement with this State of Design Authority, they have notified us of the unsafe condition described in the MCAI and service information referenced above. We are issuing this AD because we evaluated all information provided by the State of Design Authority and determined the unsafe condition exists and is likely to exist or develop on other products of the same type design.

EASA has approved a master minimum equipment list (MMEL) for the ATLAS, which allows operation of the airplane with the system disabled for up to 10 flight hours with operating limitations. However, the FAA has not approved an MMEL for the ATLAS. The EASA AD allows operation for up to 100 flight hours with the system disabled and with the same operating limitations as in the MMEL. However, this AD does not allow operation with the ATLAS disabled.

Instead, this AD prohibits all flight until a modification has been incorporated in accordance with an FAA-approved method. Until a modification method is developed and approved, this AD requires revising the operating limitations in the AFM and fabricating and installing a placard to prohibit further flight.Start Printed Page 24008

The FAA finds the service information from the STC holder (Cranfield Aerospace Solutions) does not contain adequate instructions to safely disable the ATLAS. Those instructions include the use of “speed tape” around each Tamarack active camber surface (TACS) to keep them faired in the neutral position during flight. Any modifications mandated through AD action become changes to the type design in the U.S. system. The FAA would need to ensure that the use of speed tape complies with the applicable airworthiness regulations for use on a movable surface to hold that surface in a fixed position. The speed tape does not have sufficient testing and analysis to support the type design change. This program would involve testing for environmental effects, fatigue analysis, and analysis of hazards due to potential failures of the tape. Without more analysis, the security of the speed tape method to prevent movement of the TACS cannot be assured, and loss of control of the airplane may occur with the ATLAS disabled. An operator or Cranfield may provide substantiating data to the FAA and request an alternative method of compliance using the procedures in paragraph (g) of this AD.

This AD specifies that the owner/operator (pilot) may revise the AFM and may fabricate and install a placard prohibiting flight. Revising an AFM is not considered a maintenance action and may be done by a pilot holding at least a private pilot certificate. Allowing the pilot to fabricate and install a placard is an exception to our standard maintenance regulations. These actions must be recorded in the aircraft maintenance records to show compliance with this AD.

FAA's Determination of the Effective Date

An unsafe condition exists that requires the immediate adoption of this AD. The FAA has found that the risk to the flying public justifies waiving notice and comment prior to adoption of this rule because the ATLAS, when operational, deflects the active control surfaces on the outboard wings. The malfunction of the ATLAS may reduce the pilot's ability to control the airplane. The service information provided by the STC holder does not contain adequate instructions to mitigate the unsafe condition. This unsafe condition could lead to loss of control of the airplane with consequent loss of life. The severity of the risk warrants compliance before further flight. Therefore, we find good cause that notice and opportunity for prior public comment are impracticable. In addition, for the reasons stated above, we find that good cause exists for making this amendment effective upon publication.

This AD is a final rule that involves requirements affecting flight safety, and we did not precede it by notice and opportunity for public comment. We invite you to send any written relevant data, views, or arguments about this AD. Send your comments to an address listed under the ADDRESSES section. Include “Docket No. FAA-2019-0350; Product Identifier 2019-CE-025-AD” at the beginning of your comments. We specifically invite comments on the overall regulatory, economic, environmental, and energy aspects of this AD. We will consider all comments received by the closing date and may amend this AD because of those comments.

We will post all comments we receive, without change, to http://www.regulations.gov, including any personal information you provide. We will also post a report summarizing each substantive verbal contact we receive about this AD.

We estimate that this AD affects 76 products of U.S. registry. We also estimate that it will take about 2 work-hours per product to revise the Operating Limitations section of the AFM and to fabricate and install a placard. The average labor rate is $85 per work-hour. We estimate the parts cost to fabricate the placard as $5.

This AD prohibits flight until the incorporation of an FAA-approved modification. At this time, a modification does not exist; therefore, we have no data to use for estimating the cost of the modification.

As indicated earlier in this preamble, we specifically invite the submission of comments and other data regarding the costs of this AD.

This AD is issued in accordance with authority delegated by the Executive Director, Aircraft Certification Service, as authorized by FAA Order 8000.51C. In accordance with that order, issuance of ADs is normally a function of the Compliance and Airworthiness Division, but during this transition period, the Executive Director has delegated the authority to issue ADs applicable to small airplanes, gliders, balloons, airships, domestic business jet transport airplanes, and associated appliances to the Director of the Policy and Innovation Division.

This AD was prompted by mandatory continuing airworthiness information (MCAI) issued by the aviation authority of another country to identify and correct an unsafe condition on an aviation product. The MCAI describes the unsafe condition as malfunction of the ATLAS, which could cause difficulty for the pilot to recover the airplane to safe flight. We are issuing this AD to prevent failure of the Tamarack ATLAS winglets, which may lead to the pilot's inability to control the airplane.

Unless already done, do the following actions in paragraphs (f)(1) through (3) of this AD.

(ii) Fabricate and install a placard in the cockpit of the airplane, in plain view of the pilot, with the following text: ALL FLIGHT IS PROHIBITED.

(3) You may remove the AFM revision and placard required by paragraph (f)(1) of this AD after incorporating an FAA-approved modification. To obtain FAA-approval, the modification method must be approved by the Manager, New York ACO Branch, and the approval letter must specifically refer to this AD. To contact the New York ACO Branch, you may use the contact information found in paragraph (g) of this AD.

A special flight permit may be issued to allow 10 hours time-in-service for non-passenger carrying flight under the operating limitations in figure 1 to this paragraph of this AD. 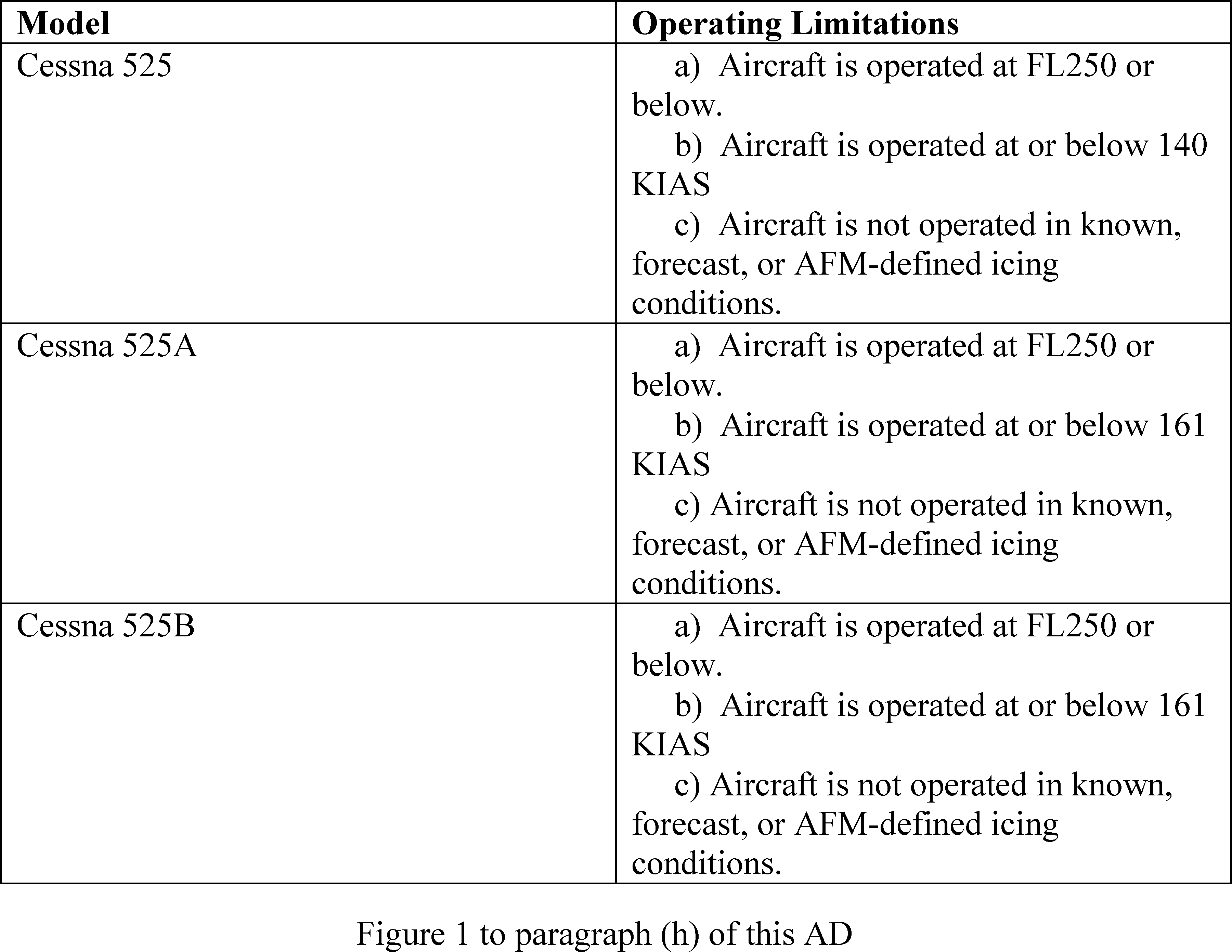