The Office of the Federal Register will be closed Friday, June 18, 2021, in observance of Juneteenth National Independence Day. We will reopen on Monday, June 21, 2021, at 8:45am.

The FAA proposes to adopt a new airworthiness directive (AD) for Leonardo S.p.a. (Leonardo) Model AB139 and AW139 helicopters. This proposed AD would require removing certain main gearbox (MGB) input modules from service. This proposed AD was prompted by the discovery that a batch of duplex bearings, which are installed on the MGB input modules, are defective. The actions of this proposed AD are intended to address an unsafe condition on these products.

The FAA must receive comments on this proposed AD by July 23, 2020.

You may examine the AD docket on the internet at https://Start Printed Page 35019www.regulations.gov by searching for and locating Docket No. FAA-2020-0554; or in person at the Docket Operations Office between 9 a.m. and 5 p.m., Monday through Friday, except Federal holidays. The AD docket contains this proposed AD, the European Aviation Safety Agency (now European Union Aviation Safety Agency) (EASA) AD, any comments received, and other information. The street address for Docket Operations is listed above. Comments will be available in the AD docket shortly after receipt.

The FAA invites you to participate in this rulemaking by submitting written comments, data, or views. The FAA also invites comments relating to the economic, environmental, energy, or federalism impacts that might result from adopting the proposals in this document. The most helpful comments reference a specific portion of the proposal, explain the reason for any recommended change, and include supporting data. To ensure the docket does not contain duplicate comments, commenters should send only one copy of written comments, or if comments are filed electronically, commenters should submit only one time.

EASA, which is the Technical Agent for the Member States of the European Union, has issued EASA AD 2016-0255R1, dated January 17, 2017 (EASA AD 2016-0255R1) to correct an unsafe condition for Leonardo (formerly Finmeccanica S.p.A., AgustaWestland Philadelphia Corporation, Agusta Aerospace Corporation) Model AB139 and AW139 helicopters with certain serial-numbered MGB input modules part-number (P/N) 3K6320A00135 or P/N 3K6320A00136 installed. EASA advises that the supplier of a batch of duplex bearings installed on MGB input modules reported that the bearings were defective, due to a quality control issue. This condition, if not detected or corrected, could lead to damage of the input module duplex ball bearing inner race, possibly resulting in loss of engine power and reduced control of the helicopter. Accordingly, EASA AD 2016-0255R1 requires removing the affected MGB input modules from service.

These helicopters have been approved by EASA and are approved for operation in the United States. Pursuant to the FAA's bilateral agreement with the European Union, EASA has notified the FAA about the unsafe condition described in its AD. The FAA is proposing this AD after evaluating all known relevant information and determining that an unsafe condition is likely to exist or develop on other helicopters of the same type designs.

Differences Between This Proposed AD and the EASA AD

The EASA AD requires returning affected parts and sending information to Leonardo; however, this proposed AD would not.

The FAA is issuing this rulemaking under the authority described in Subtitle VII, Part A, Subpart III, Section 44701: General requirements. Under that section, Congress charges the FAA with promoting safe flight of civil aircraft in air commerce by prescribing regulations for practices, methods, and procedures the Administrator finds necessary for safety in air commerce. This regulation is within the scope of that authority because it addresses an unsafe condition that is likely to exist or develop on products identified in this rulemaking action.

For the reasons discussed, I certify this proposed regulation:

1. Is not a “significant regulatory action” under Executive Order 12866,

2. Will not affect intrastate aviation in Alaska, andStart Printed Page 35020

3. Will not have a significant economic impact, positive or negative, on a substantial number of small entities under the criteria of the Regulatory Flexibility Act. 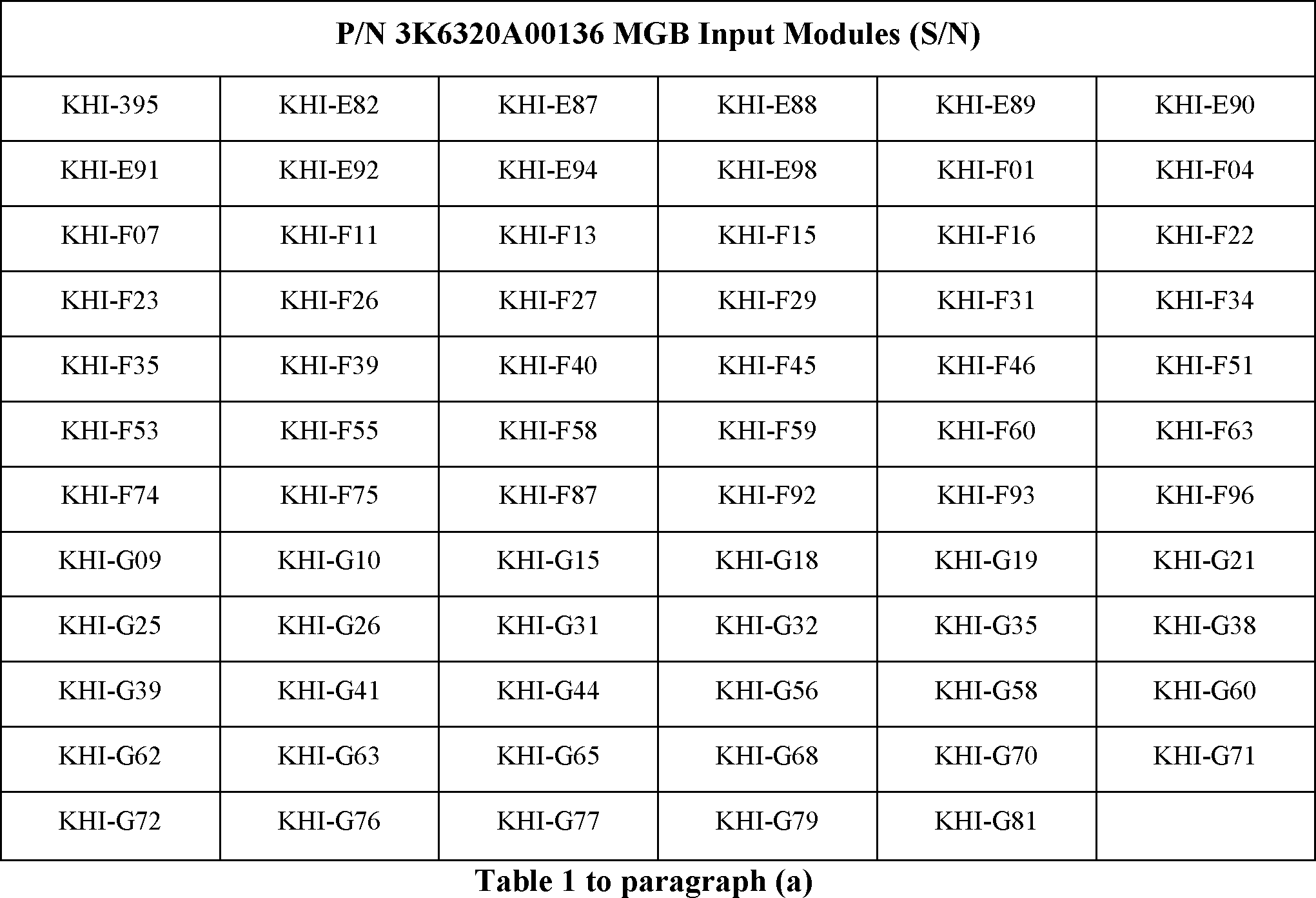 This AD defines the unsafe condition as defective duplex bearings on MGB input modules, due to a quality control issue. This condition could result in damage including corrosion and cracking, which could result in excessive heat of the input module duplex ball bearing inner race and subsequent loss of engine power and loss of helicopter control.

(3) After the effective date of this AD, do not install an MGB input module with a P/N and S/N listed in paragraph (a) of this AD on any helicopter.

(2) For operations conducted under a 14 CFR part 119 operating certificate or under 14 CFR part 91, subpart K, the FAA suggests that you notify your principal inspector, or lacking a principal inspector, the manager of the local flight standards district office or certificate holding district office before Start Printed Page 35021operating any aircraft complying with this AD through an AMOC.