The Department of Defense is publishing the unclassified text of an arms sales notification.

This 36(b)(5)(C) arms sales notification is published to fulfill the requirements of section 155 of Public Law 104-164 dated July 21, 1996. The following is a copy of a letter to the Speaker of the House of Representatives, Transmittal 20-0E with attached Policy Justification and Sensitivity of Technology. 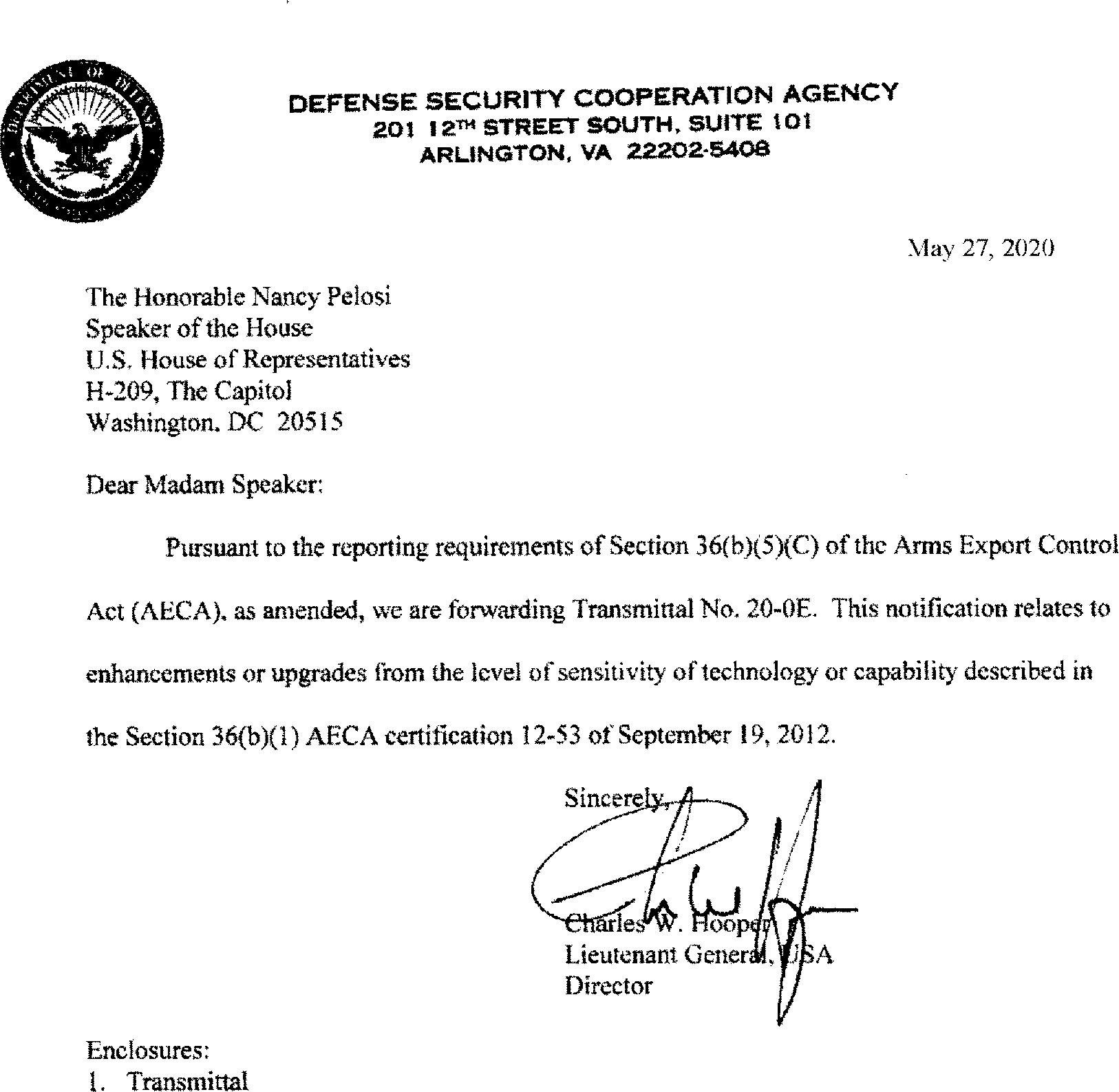 REPORT OF ENHANCEMENT OR UPGRADE OF SENSITIVITY OF TECHNOLOGY OR CAPABILITY (SEC. 36(B)(5)(C), AECA)

(i) Prospective Purchaser: Government of Indonesia

On January 14, 2014, Congress was notified, by Congressional certification transmittal number 0P-13, under Section 36(b)(5)(a) of the Arms Export Control Act, of the inclusion of eight sets of Embedded Global Positioning System/Inertial Navigation System (GPS/INS) equipment. Although the value of the GPS/INS was included in the total value of the case, it was not enumerated or valued as MDE in the original notification. Upgrading the status of this equipment to MDE resulted in a net increase in MDE cost of $4.2 million, but the total case value remained $1.42 billion.

On March 30, 2015, Congress was notified, by Congressional certification transmittal number 0E-15, under Section 36(b)(5)(a) of the Arms Export Control Act, of the inclusion of two Embedded Global Positioning Systems/Inertial Navigation Systems (EGI) and eight M36-E9 Captive Air Training Missiles (CATMs) for the AH-64 Apache Helicopter program as Major Defense Equipment. The EGIs were originally reported as 8 sets (2 per set); however, Start Printed Page 39544the quantity was under reported and should have read 9 sets. The value of all 9 sets was captured in the MDE total. The value of the CATMs was included in the sale but not enumerated as MDE in the original notification. The addition of these items as MDE resulted in a net $350,000 increase in the MDE cost. The total case value for this notification remained $1.42 billion.

This transmittal reports the inclusion of an additional one hundred ninety-two (192) AGM-114R (NN) Hellfire missiles (MDE). The estimated additional MDE cost is $30 million, resulting in a revised MDE value of $754 million. The revised case value is $1.72 billion.

(iv) Significance: The United States is committed to the security of Indonesia, and it is vital to U.S. national interests to assisting Indonesia in developing and maintaining a strong and ready self-defense capability. The Indonesian Army (TNI-AD) expends Hellfire missiles in training as well as during internal and bilateral exercises to ensure mission readiness and enhance interoperability with U.S. armed forces. Most notably, successful employment of Apache Hellfire missiles in Exercise Garuda Shield in August 2019 reinforced Indonesia's confidence in the weapons.

(v) Justification: This proposed sale will support the foreign policy and national security of the United States by helping to improve the security of a friendly country. The additional missiles will provide a robust stock to cover several years of training and exercises, and it will prepare Indonesia for future maritime security contingencies.