EPA is correcting existing regulatory language for the Toxics Release Inventory (TRI) Program. EPA is making corrections that update identifiers, formulas, and names for certain TRI-listed chemicals, and updating the text that identifies which chemicals the 0.1 percent de minimis concentration applies to in order to remedy a cross-reference to a no-longer-accurate Occupational Safety and Health Administration (OSHA) regulatory citation. These corrections maintain previous regulatory actions and do not alter existing reporting requirements or impact compliance burdens or costs.

The EPA has established a docket for this action under Docket ID No. EPA-HQ-TRI-2019-0146. All documents in the docket are listed on the http://www.regulations.gov website. Although listed in the index, some information is not publicly available, e.g., Confidential Business Information (CBI) or other information whose disclosure is restricted by statute. Certain other material, such as copyrighted material, is not placed on the internet and will be publicly available only in hard copy form. Publicly available docket materials are available electronically through http://www.regulations.gov. Additional instructions on visiting the docket, along with more information about dockets generally, is available at http://www.epa.gov/​dockets/​commenting-epa-dockets.

For general information contact: The Emergency Planning and Community Right-to-Know Hotline; telephone numbers: toll free at (800) 424-9346 (select menu option 3) or (703) 348-5070 in the Washington, DC Area and International; or go to https://www.epa.gov/​home/​epa-hotlines.

A. Does this action apply to me?

You may be potentially affected by this action if you manufacture, process, or otherwise use any TRI listed chemical. The following list of North American Industrial Classification System (NAICS) codes is not intended to be exhaustive, but rather provides a guide to help readers determine whether this document applies to them. Potentially affected entities may include:

A more detailed description of the types of facilities covered by the NAICS codes subject to reporting under EPCRA section 313 can be found at: https://www.epa.gov/​toxics-release-inventory-tri-program/​tri-covered-industry-sectors. To determine whether your facility would be affected by this action, you should carefully examine the applicability criteria in part 372, subpart B, of title 40 of the Code of Federal Regulations (CFR). Federal facilities are required to report under Executive Order 13834 (https://www.govinfo.gov/​content/​pkg/​FR-2018-05-22/​pdf/​2018-11101.pdf) as explained in the Implementing Instructions from the Council on Environmental Quality (https://www.sustainability.gov/​pdfs/​eo13834_​instructions.pdf). If you have questions regarding the applicability of this action to a particular entity, consult the person listed under FOR FURTHER INFORMATION CONTACT.

B. What action is the Agency taking?

EPA is correcting existing regulatory language for the TRI Program. EPA is making (a) editorial corrections that update identifiers, formulas, and names for certain TRI-listed chemicals described in the CFR, and (b) updating the text to indicate for which chemicals the 0.1 percent de minimis concentration applies to remedy a cross-reference to a no-longer-accurate OSHA regulatory citation. This action does not change the regulatory requirements of the TRI Program. This action is a “housekeeping” rulemaking intended to correct inaccuracies in regulatory text.

C. What is the Agency's authority for taking these actions?

EPA is taking these actions under sections 313(g)(1) and 328 of the Emergency Planning and Community Right-to-Know Act (EPCRA), 42 U.S.C. 11023(g)(1) and 11048. In general, EPCRA section 313 requires owners and operators of covered facilities in specified SIC codes that manufacture, process, or otherwise use listed toxic chemicals in amounts above specified threshold levels to report certain facility specific information about such chemicals, including the annual releases and other waste management quantities. EPCRA section 313(g)(1) requires EPA to publish a uniform toxic chemical release form for these reporting purposes, and it also prescribes, in general terms, the types of information that must be submitted on the form. Congress also granted EPA broad rulemaking authority to allow the Agency to fully implement the statute. EPCRA section 328 states that: “The Administrator may prescribe such regulations as may be necessary to carry out this chapter.” 42 U.S.C. 11048.

In the proposed rule (84 FR 65739, November 29, 2019) (FRL-9995-92), EPA proposed corrections that updated identifiers, formulas, and names for certain TRI-listed chemicals described in the CFR. Specifically, EPA proposed to: (i) Remove chemical names for those chemicals that have been delisted or moved to other listings; (ii) Incorporate listings in 40 CFR 372.65(b) for chemicals that are listed in 40 CFR 372.65(a) but are not listed in 40 CFR 372.65(b); (iii) Correct inaccurate Chemical Abstracts Service Registry Numbers (CASRNs); (iv) Correct errors in chemical category definitions; (v) Remedy other known errors in the CFR chemical lists; (vi) Remove leading zeros from CASRNs; (vii) Correct errors in the list of lower thresholds for chemicals of special concern; and (viii) Revise the list of chemical names to include only the TRI primary name and the EPA registry name (if different from the TRI primary name) as a synonym. In addition, EPA proposed to replace an existing outdated cross-referenced regulatory citation and modify the text of the de minimis exemption, without changing the substance of the exemption itself.

The proposed changes included removing ammonium nitrate (solution) (CASRN: 6484-52-2), ammonium sulfate (solution) (CASRN: 7783-20-2), and flumetralin (CASRN: 62924-70-3) from the chemical lists. EPA also proposed to remove methylenebis(phenylisocyanate) (MDI) (CASRN: 101-68-8) as an individually listed chemical because it is part of the diisocyanates category. EPA proposed to add two chemicals, toluene-2,4-diisocyanate (2,4-TDI) (CASRN: 584-84-9) and vinyl bromide (CASRN: 593-60-2), to the CASRN ordered list at 40 CFR 372.65(b), these two were missing from 40 CFR 372.65(b) but were included in the alphabetical ordered listing at 40 CFR 372.65(a). The proposed rule included corrections to the CASRNs for phosphorus (yellow or white) and d-trans-allethrin as well as corrections to the category definitions for the cyanide compounds category and the polychlorinated alkanes category. EPA proposed to correct footnotes for 2,2-dibromo-3-nitrilopropionamide (DBNPA) (CASRN: 10222-01-2) and methyl mercaptan (74-93-1) which are on the list but not currently reportable. EPA proposed to fix the placement of the chemical structure for the polybrominated biphenyls (PBBs) category which appears out of place in the CFR. EPA proposed to remove leading zeros from the CASRNs for a number of listed chemicals. EPA proposed to fix errors in and simplify the table for lower thresholds for chemicals of special concern at 40 CFR 372.28(a)(2). EPA proposed to revise the EPCRA section 313 chemical list by including only the primary chemical name, even if it is a common trade name, and removing most secondary names (the only secondary names that would remain are the EPA registry names from EPA's Substance Registry Services (SRS)). The last proposed change was to update the text of the de minimis exemption at 40 CFR 372.38(a) to remove a regulatory citation that no longer exists. For details about these changes please consult the proposed rule (84 FR 65739, November 29, 2019) (FRL-9995-92).

III. What comments did EPA receive on the proposed rule?

EPA made no substantive changes from what was included in the proposed rule, however, the final rule reflects the following corrections to what was proposed:

EPA has established an official public docket for this action under Docket ID No. EPA-HQ-TRI-2019-0146. The public docket includes information considered by EPA in developing this action, including the document listed below, which is electronically or physically located in the docket.

Additional information about these statutes and Executive orders can be found at http://www2.epa.gov/​laws-regulations/​laws-and-executive-orders.

This action does not impose any new information collection burden. Facilities that are affected by this action are already required to report for the chemicals impacted by this action under EPCRA section 313 and section 6607 of the Pollution Prevention Act (PPA), 42 U.S.C. 13101 et seq. OMB has previously approved the information collection requirements contained in 40 CFR part 372 under the provisions of the PRA, 44 U.S.C. 3501 et seq., and has assigned OMB control number 2025-0009 (EPA ICR No. 1363.21) for Form R and Form A.

This action does not contain any unfunded mandate as described in UMRA, 2 U.S.C. 1531-1538, and does not significantly or uniquely affect small governments. The action will impose no enforceable duty on any state, local or tribal governments or the private sector.

This action does not have federalism implications, as specified in Executive Order 13132 (64 FR 43255, August 10, 1999). It will not have substantial direct effects on the states, on the relationship between the National Government and the states, or on the distribution of power and responsibilities among the various levels of government.

This action is not a “significant energy action” as defined in Executive Order 13211 (66 FR 28355, May 22, 2001), because it is not likely to have a significant adverse effect on the supply, distribution or use of energy.

This rulemaking does not involve technical standards that would require Agency consideration under NTTAA section 12(d), 15 U.S.C. 272 note.

This action does not entail special considerations of environmental justice related issues as delineated by Executive Order 12898 (59 FR 7629, February 16, 1994), because it does not establish an environmental health or safety standard. This action involves corrections that do not change the reporting requirements or otherwise affect the level of protection provided to human health or the environment.

This action is subject to the CRA, and the EPA will submit a rule report to each House of the Congress and to the Comptroller General of the United States. This action is not a “major rule” as defined by 5 U.S.C. 804(2).

1. The authority citation for part 372 continues to read as follows:

The addition and revision read as follows:

i. Add a table heading.

v. Remove the notes to the table and add footnote 1.

i. Add a table heading.

iii. Remove the notes to the table and add footnote 1.

The additions and revisions read as follows: 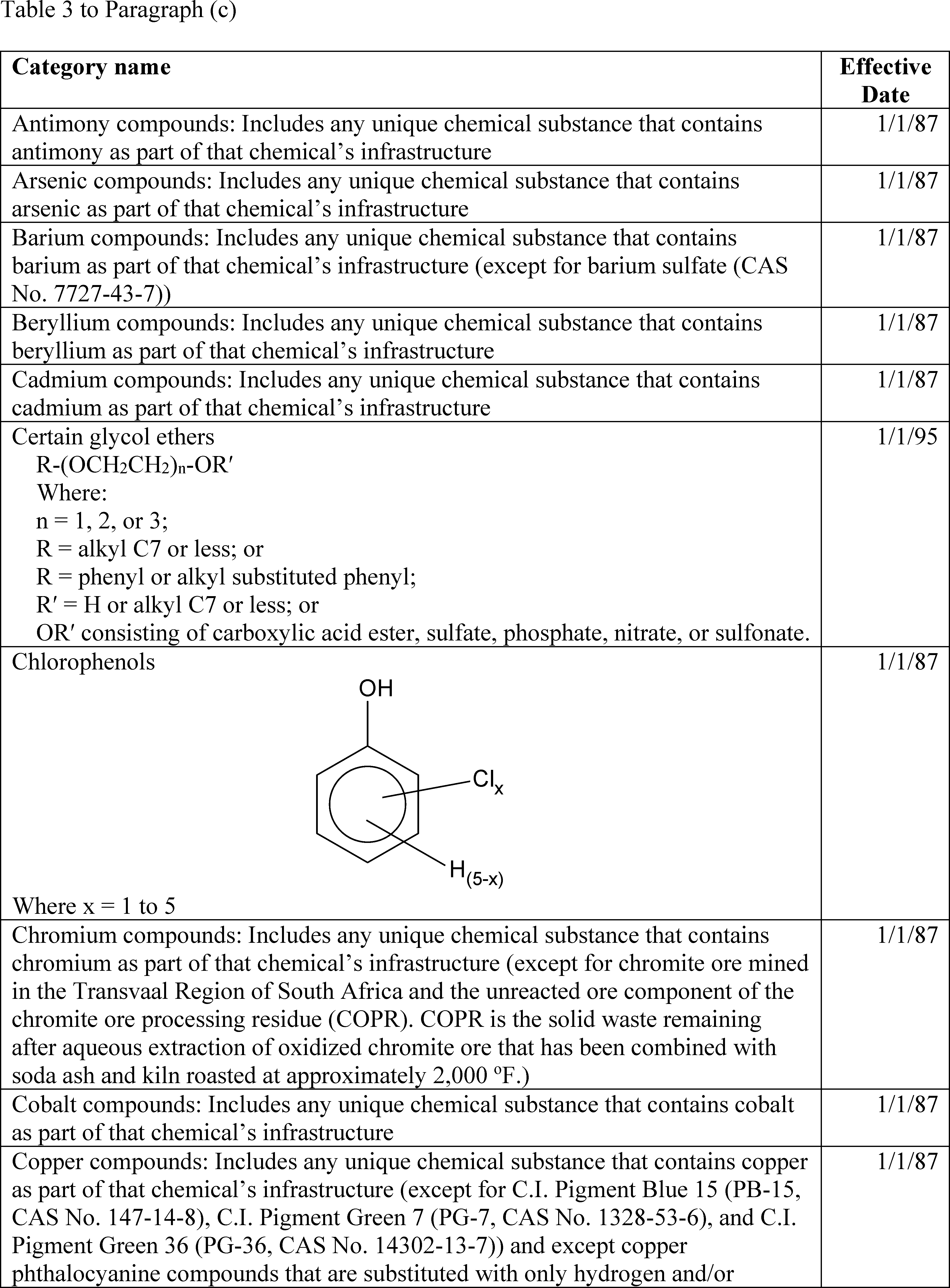 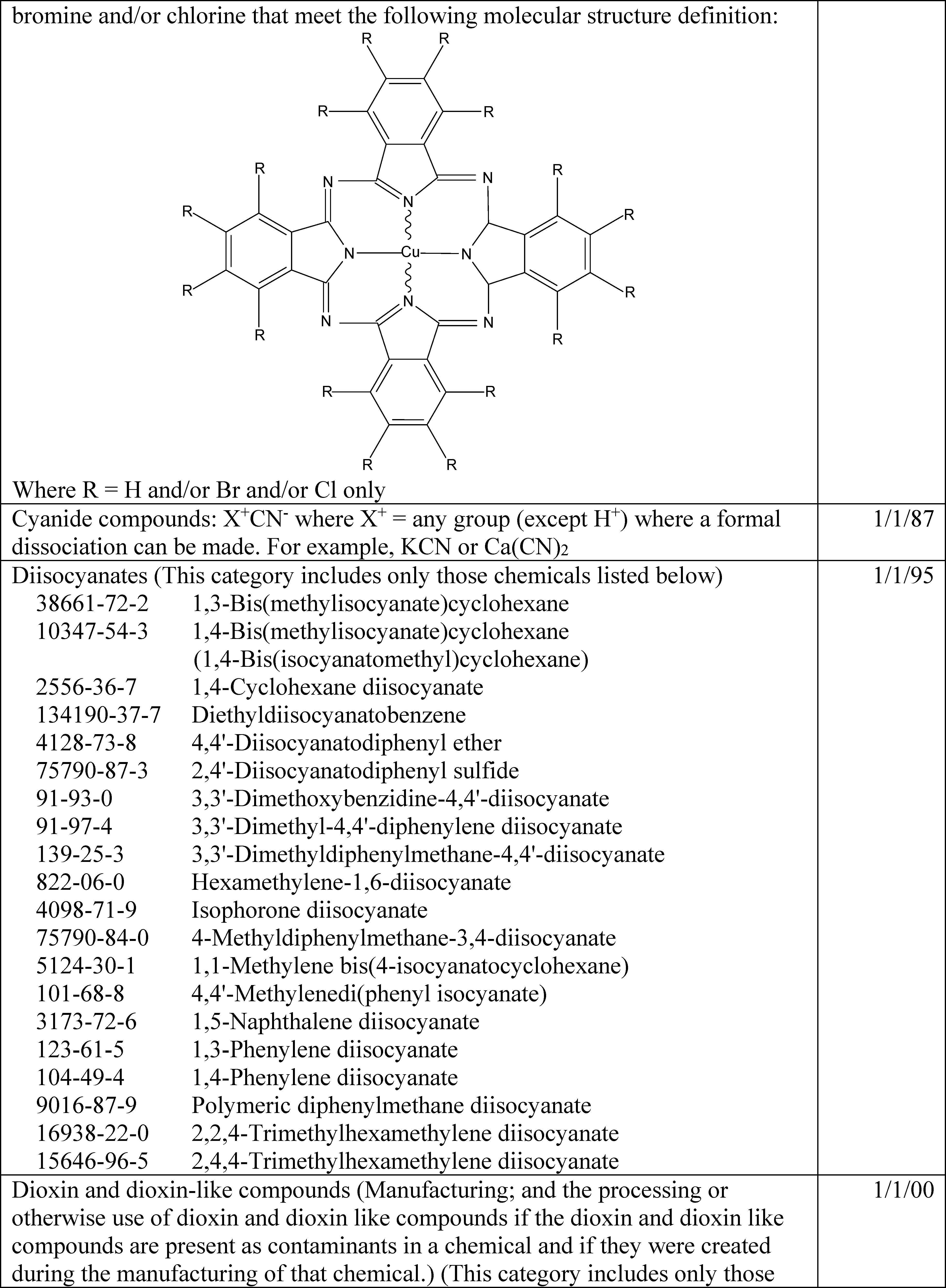 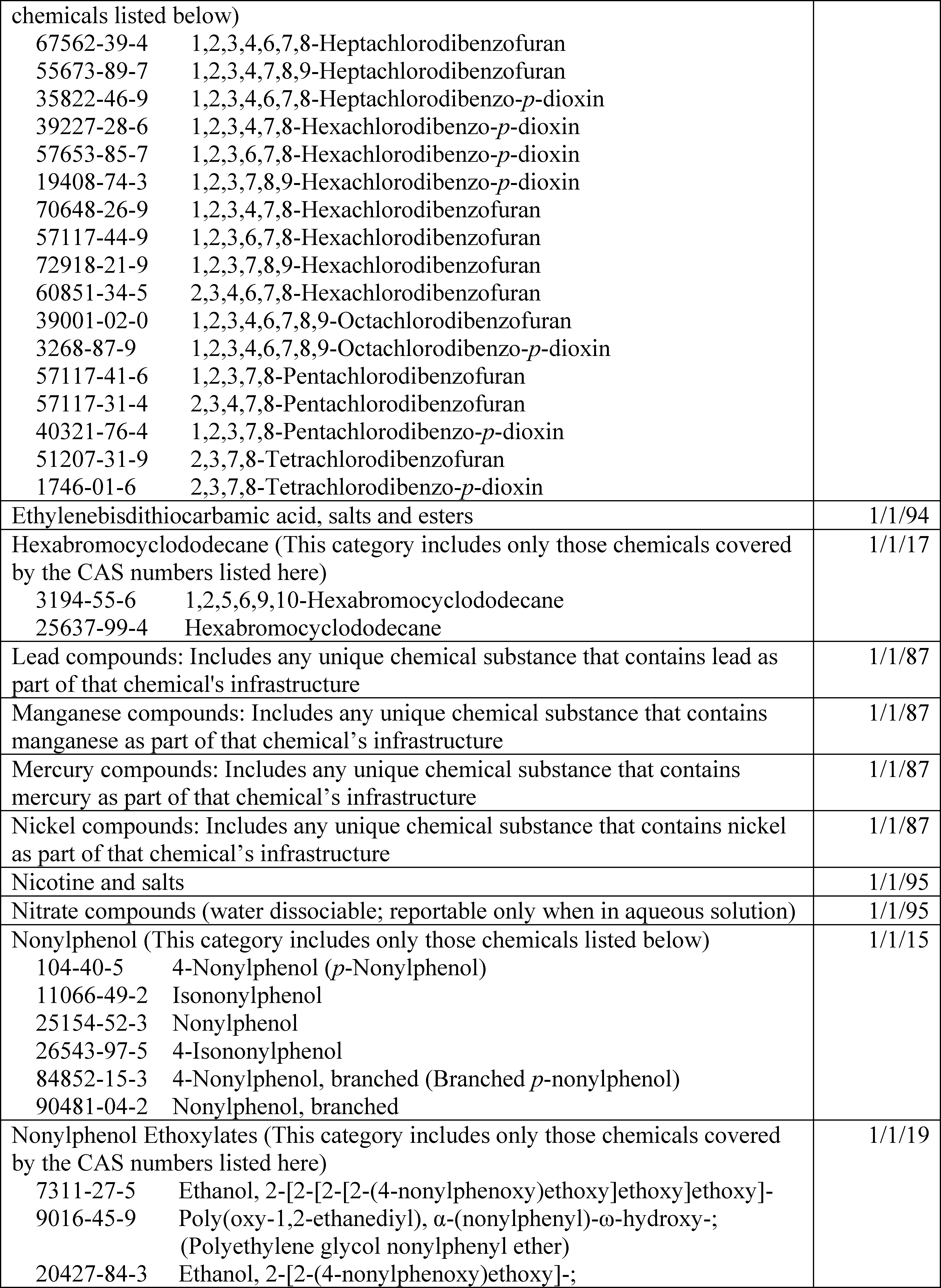 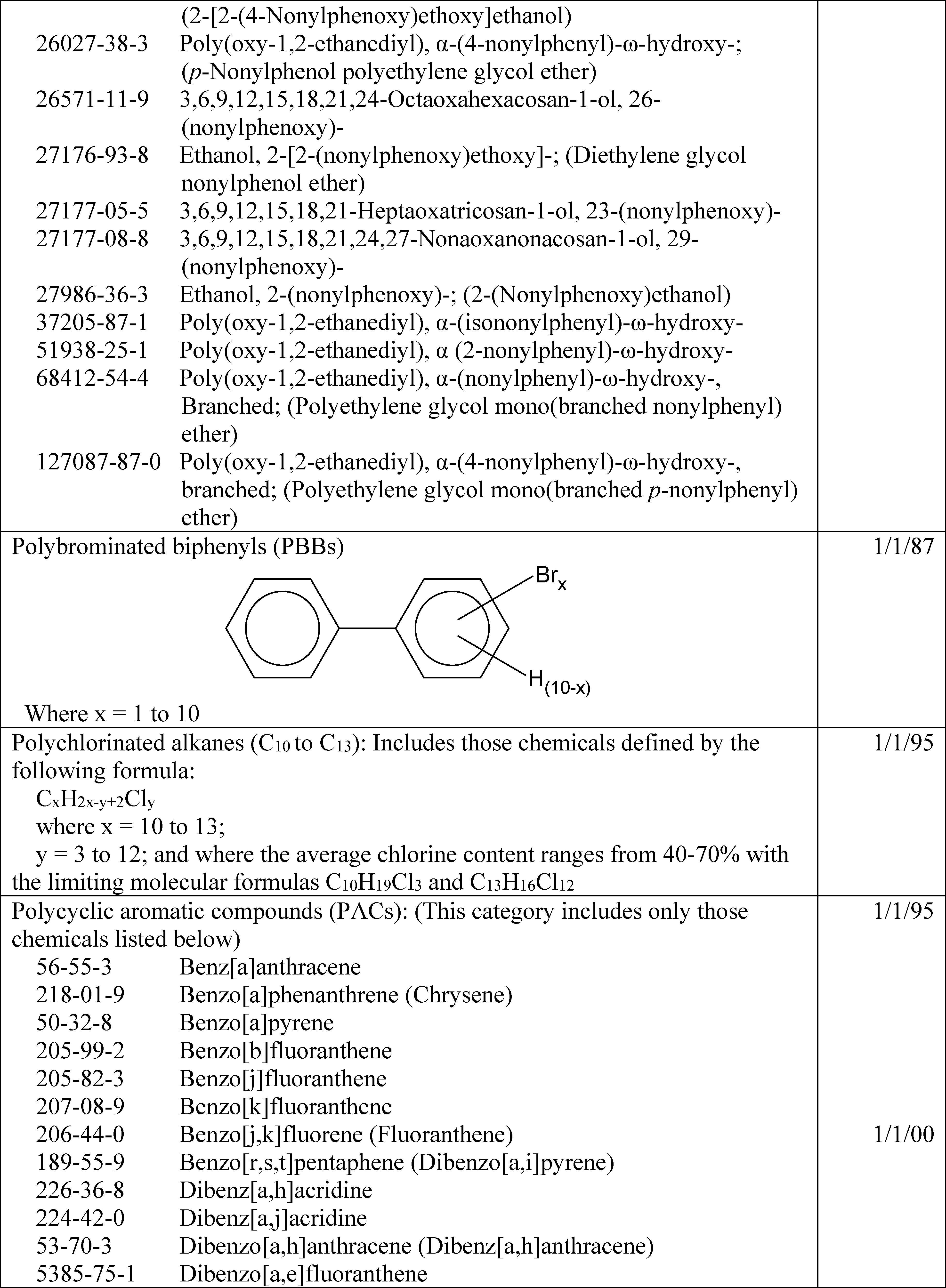 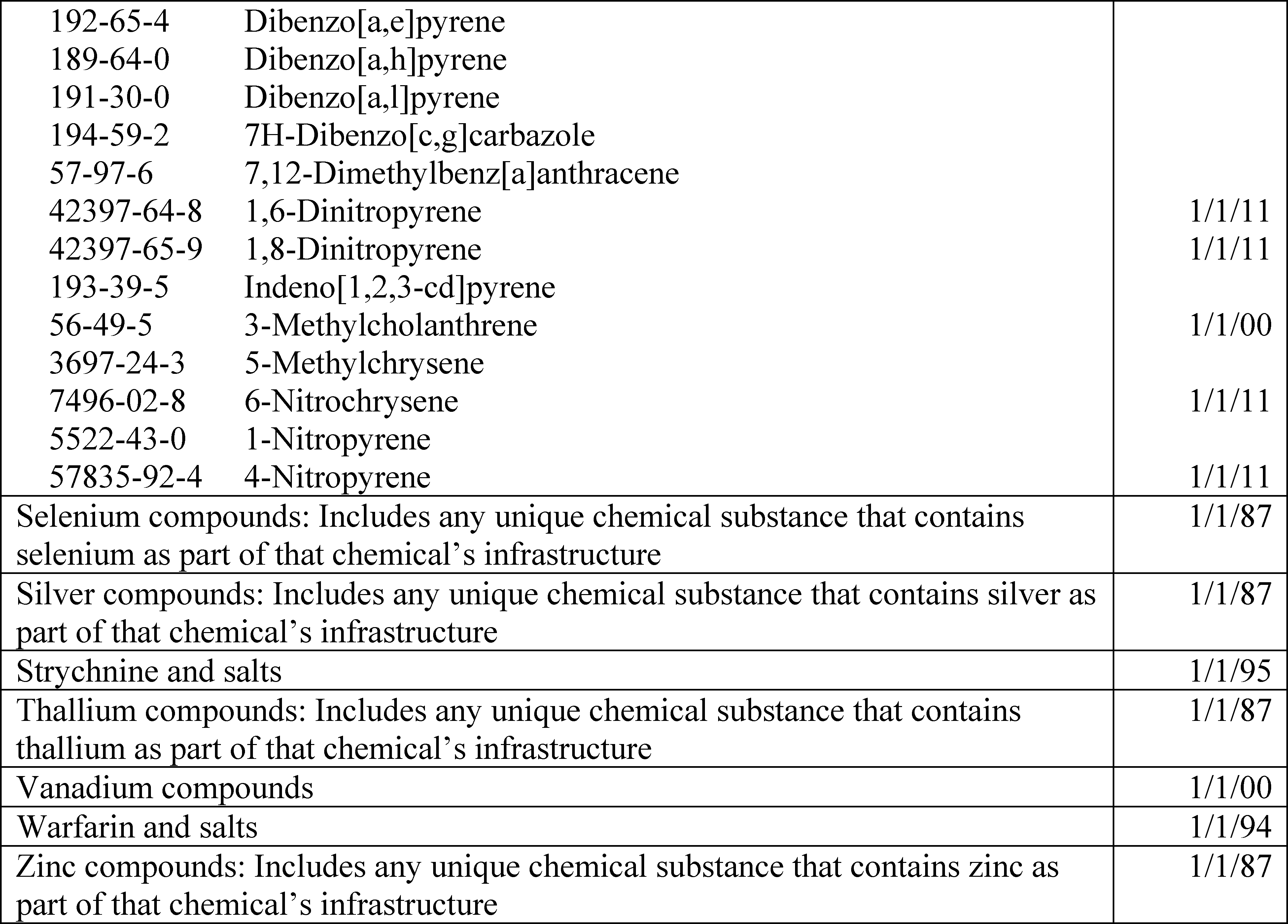