Draft Amendment to the Agreement Suspending the Antidumping Investigation on Uranium From the Russian Federation; Request for Comment

A Notice by the International Trade Administration on 09/16/2020

The U.S. Department of Commerce (Commerce) and State Atomic Energy Corporation Rosatom (Rosatom) have initialed a draft amendment to the Agreement Suspending the Antidumping Investigation on Uranium from the Russian Federation (Agreement). The draft amendment will allow the Russian Federation to export Russian uranium products to the United States in accordance with the export limits and other terms detailed in the amendment. Commerce is inviting interested parties, industrial users, and the public to comment on the text of the draft amendment to the Agreement.

On October 16, 1992, Commerce signed an agreement with the Russian Federation's Ministry for Atomic Energy (MINATOM), the predecessor to Rosatom, under section 734(l) of the Tariff Act of 1930, as amended (the Act), suspending the antidumping duty investigation on uranium from the Russian Federation.[1] There have been five amendments to the Agreement, the most recent of which was signed on February 1, 2008.[2] On February 22, 2019, Commerce formally opened consultations with Rosatom with respect to a possible extension of the Agreement's term.[3]

On September 11, 2020, Commerce and Rosatom initialed a draft amendment to the Agreement. The draft amendment allows for exports of Russian uranium products to the United States in accordance with the export limits and other terms detailed in the amendment. In general, the draft amendment will reduce U.S. reliance on imports of uranium from Russia over the long term. Under the current Agreement, Russian uranium exports are limited to approximately 20 percent of U.S. enrichment demand. Under the draft amended Agreement, the export limits will be equivalent to 24 percent of U.S. enrichment demand in 2021, 20 percent in 2022, 24 percent in 2023, 20 percent per year from 2024 to 2027, and 15 percent per year from 2028 to 2040. (Export limits are to be calculated on the basis of the World Nuclear Association's Lower Scenario, a 4.4 percent product assay, and a 0.3 percent tails assay.) These figures correspond to an average of approximately 17 percent over the next 20 years.

The draft amendment to the Agreement also strengthens existing protections for the U.S. commercial enrichment industry, by extending and reducing the Agreement's export limits, as discussed above.

The draft amendment includes updated provisions with respect to natural uranium returned or provided by U.S. customers to the Russian exporter pursuant to sales of enrichment (i.e., “returned feed”). The draft amendment fixes “returned feed” provisions in the existing Agreement that are detrimental to U.S. uranium miners and the U.S. converter. Specifically, under the current Agreement, foreign-origin returned feed can be delivered to the Russian exporter, enriched in Western Europe, and then exported to the United States outside the Agreement's export limits. The draft amended Agreement would require foreign-origin returned feed that is enriched or sold in third countries to be subject to the Agreement's export limits if exported back to the United States.

The export limits and other caps in the draft amendment are generally structured to allow U.S. customers to fulfill preexisting contractual obligations to purchase Russian uranium products.

The full text of the draft amendment to the Agreement follows in the Annex to this notice with the exception of Appendix 5 which contains business proprietary information and is releasable only under the Administrative Protective Order (APO).

All information provided to Commerce will be subject to release under APO and should be submitted in accordance with 19 CFR 351.103 and 19 CFR 351.105 of Commerce's regulations, including the service of copies of comments on interested parties to this proceeding. The APO and public service lists in this proceeding can be found in ACCESS. Commerce will consider all comments received by the close of the comment period.

Assistant Secretary for Enforcement and Compliance. 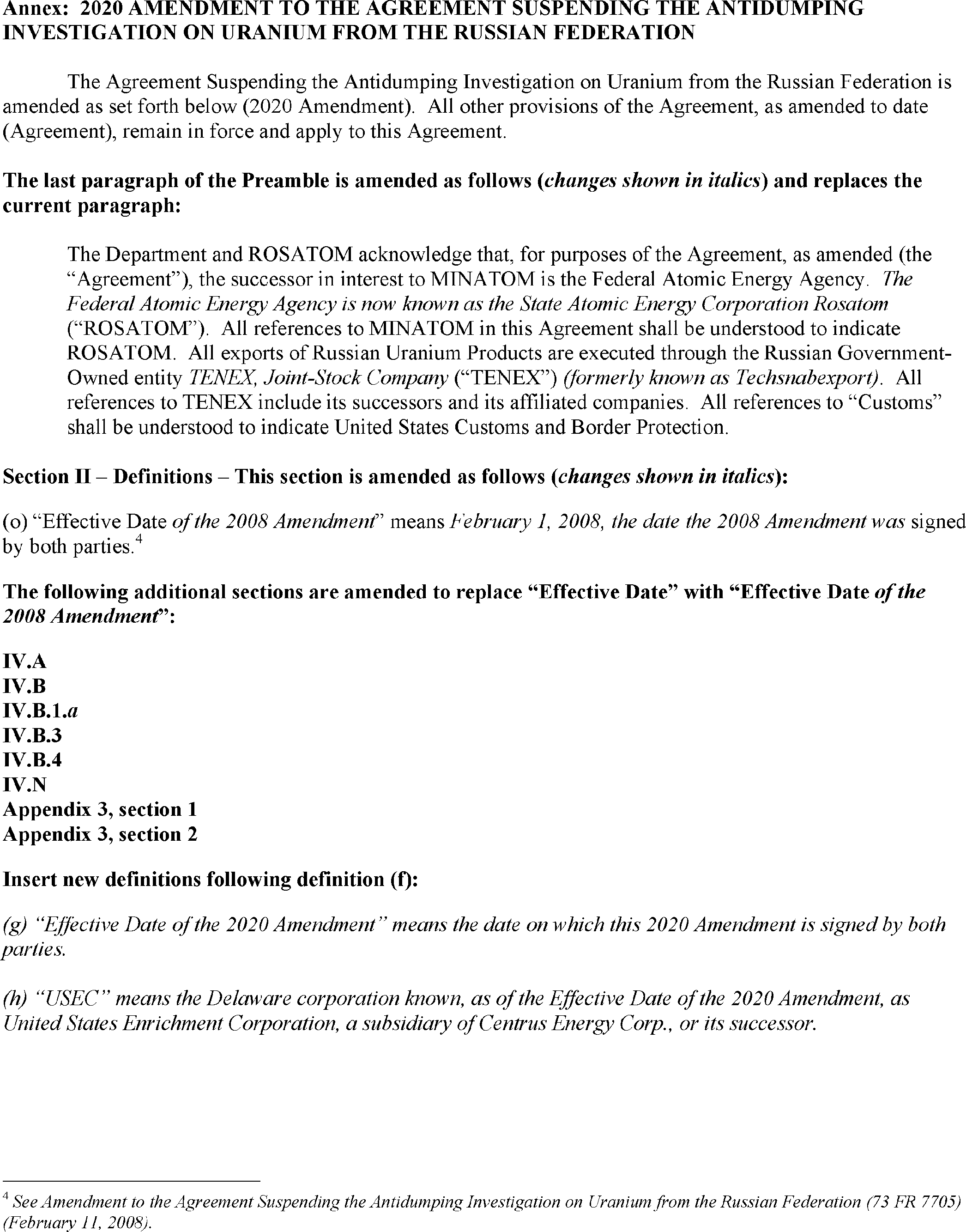 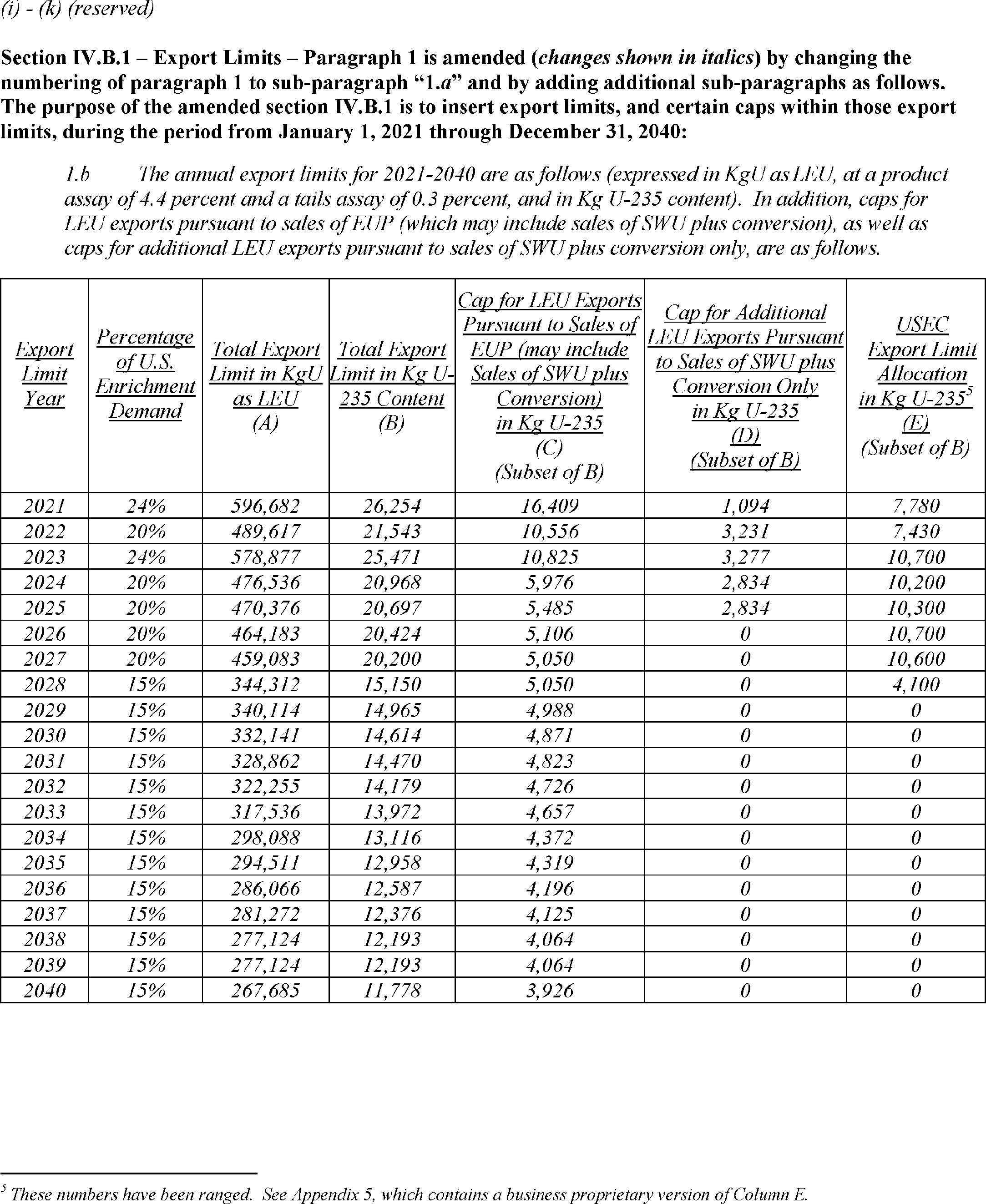 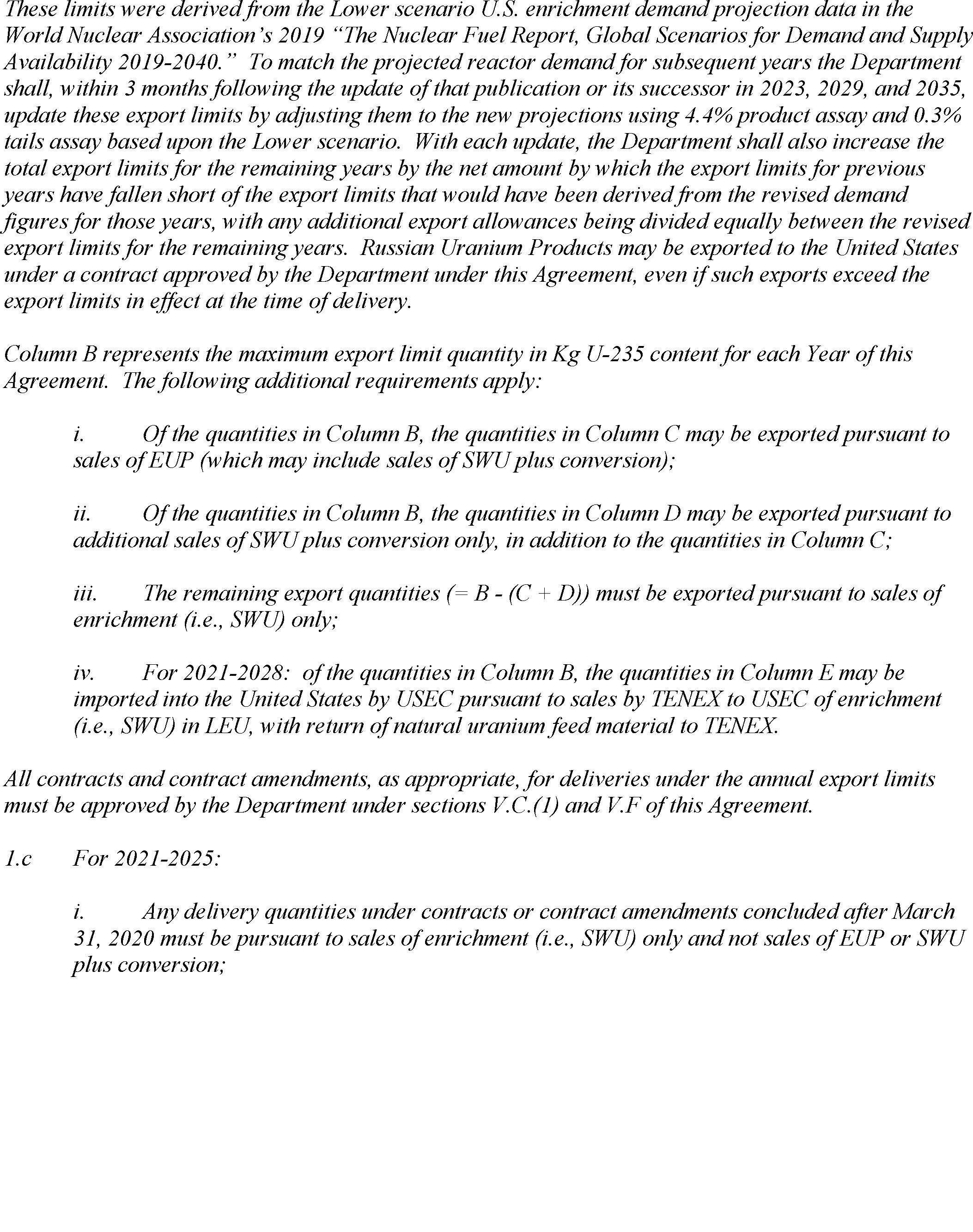 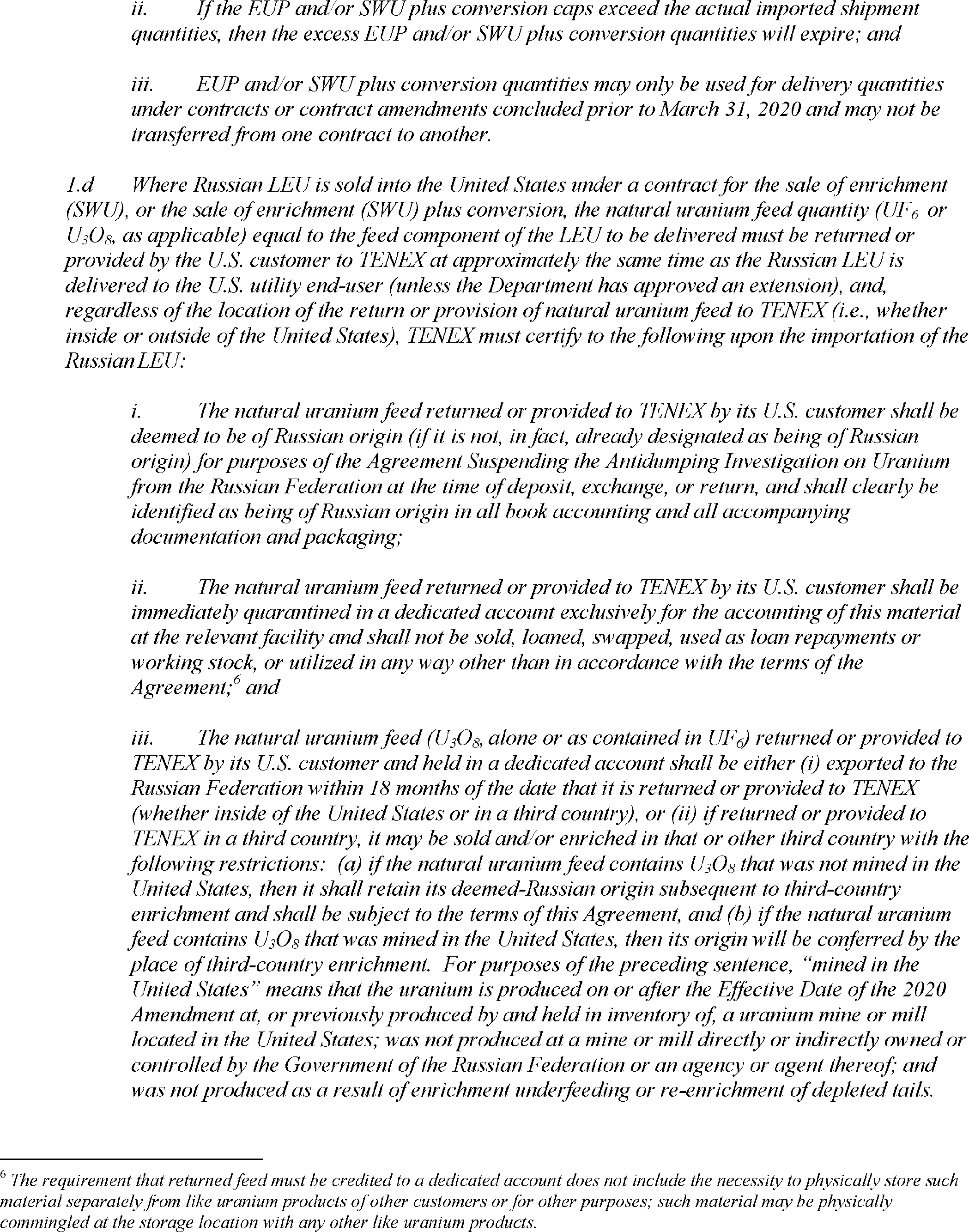 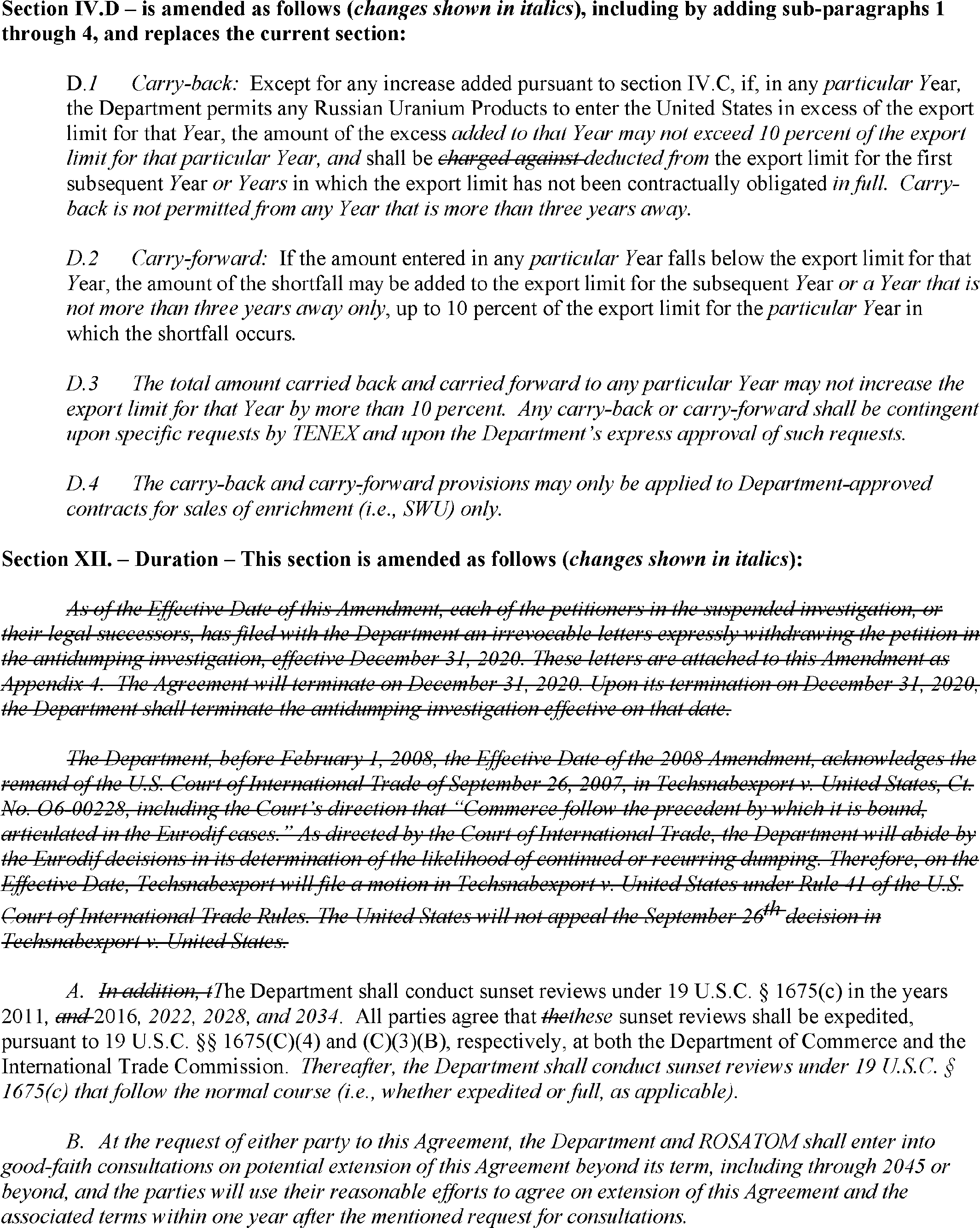 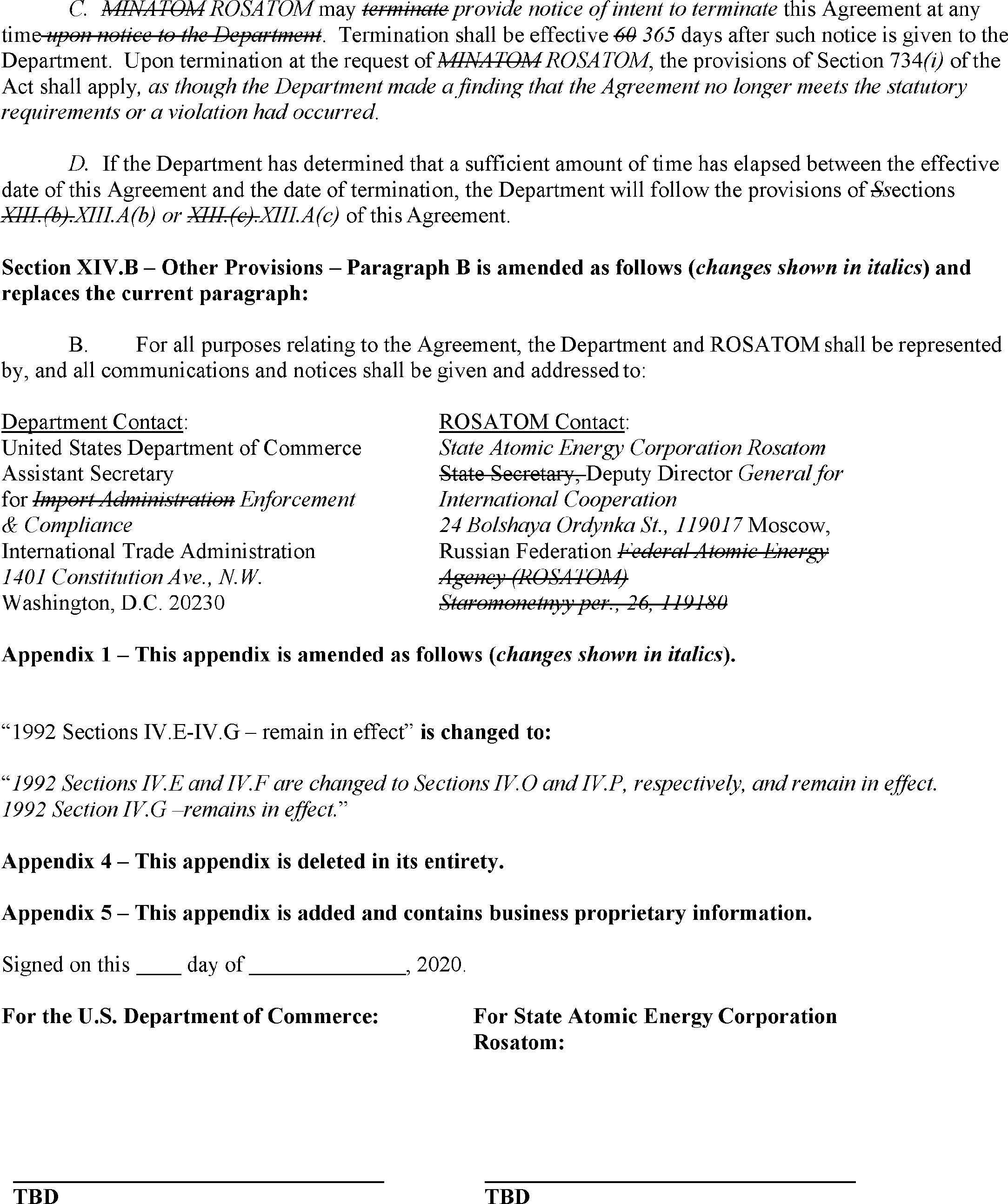 3.  See Letter to Rosatom from P. Lee Smith, Deputy Assistant Secretary for Policy & Negotiations, “Consultations on the Agreement Suspending the Antidumping Investigation on Uranium from the Russian Federation,” dated February 22, 2019.