A Notice by the Trade Representative, Office of United States on 01/06/2021

Printed version:
PDF
Publication Date:
01/06/2021
Agency:
Office of the United States Trade Representative
Dates:
The revisions in Annex I are applicable with respect to products that are entered for consumption, or withdrawn from warehouse for consumption, on or after 12:01 a.m. eastern standard time on January 12, 2021.
Document Type:
Notice
Document Citation:
86 FR 674
Page:
674-691 (18 pages)
Agency/Docket Number:
Docket Number USTR-2020-0042
Document Number:
2020-29225

The revisions in Annex I are applicable with respect to products that are entered for consumption, or withdrawn from warehouse for consumption, on or after 12:01 a.m. eastern standard time on January 12, 2021.

For questions about the investigation and revisions announced in this notice, contact Associate General Counsel Megan Grimball, at (202) 395-5725, or Director for Europe Michael Rogers, at (202) 395-3320. For questions on customs procedures or the classification of products identified in the annexes, contact Traderemedy@cbp.dhs.gov.

A. Proceedings in the Investigation

On April 12, 2019, the U.S. Trade Representative announced the initiation of an investigation to enforce U.S. rights in the WTO dispute against the EU and certain EU member States addressed to subsidies on large civil aircraft. See 84 FR 15028 (April 12 notice). The April 12 notice contains background information on the investigation and the dispute settlement proceedings.

The April 12 notice solicited comments on a proposed determination that, inter alia, the EU and certain member States have denied U.S. rights under the WTO Agreement, and in particular, under Articles 5 and 6.3 of the Agreement on Subsidies and Countervailing Measures and the General Agreement on Tariffs and Trade 1994, and have failed to comply with the WTO Dispute Settlement Body (DSB) recommendations to bring the WTO-inconsistent subsidies into compliance with WTO obligations. The April 12 notice invited public comments on a proposed action in the form of an additional ad valorem duty of up to 100 percent on products of EU member States to be drawn from a list of 317 tariff subheadings and 9 statistical reporting numbers of the Harmonized Tariff Schedule of the United States (HTSUS) included in the annex to that notice.

On July 5, 2019, USTR published a notice inviting public comments on a second list of products also being considered for an additional ad valorem duty of up to 100 percent. See 84 FR 32248.

On October 2, 2019, the WTO Arbitrator issued a report concluding that the appropriate level of countermeasures in response to the WTO-inconsistent launch aid provided by the EU or certain member States to their large civil aircraft domestic industry is approximately $7.5 billion annually.

On October 9, 2019, the U.S. Trade Representative published a determination that the EU and certain member States have denied U.S. rights under the WTO Agreement and have failed to implement DSB recommendations concerning certain subsidies to the EU large civil aircraft industry. The U.S. Trade Representative determined to take action in the form of additional duties on products of certain current or former member States of the EU, at levels of 10 or 25 percent ad valorem, effective October 18, 2019. See 84 FR 54245 (October 9, 2019) and 84 FR 55998 (October 18, 2019).

On December 12, 2019, the U.S. Trade Representative announced a review of Start Printed Page 675the action and invited public comments regarding potential revisions. See 84 FR 67992. As part of that review, on February 14, 2020, the U.S. Trade Representative announced a determination to revise the list of non-aircraft products subject to 25 percent additional duties and to increase additional duties on certain large civil aircraft from 10 to 15 percent, effective March 5 and March 18. See 85 FR 10204 (February 21, 2020) and 85 FR 14517 (March 12, 2020). The U.S. Trade Representative also determined that “going forward, the action may be revised as appropriate immediately upon any EU imposition of additional duties on U.S. products in connection with the Large Civil Aircraft dispute or with the EU's WTO challenge to the alleged subsidization of U.S. large civil aircraft.”

On June 26, 2020, the U.S. Trade Representative published a notice announcing another review of the action and establishing a docket to receive public comments. See 85 FR 38488 (June 26 notice). The June 26 notice included a proposal to impose additional duties of up to 100 percent on a new list of products of France, Germany, Spain and the United Kingdom, covered by an additional 30 tariff subheadings with an approximate annual trade value of $3.1 billion in terms of estimated import trade value for calendar year 2018. See June 26 notice, as amended by 85 FR 39661 (July 1, 2020).

The EU has represented that its retaliatory action mirrors the action taken by the United States in this investigation, but that is not accurate. Specifically, the EU's action does not mirror the U.S. action because the methodology used by the EU to exercise its $4 billion authorization relies on a benchmark reference period affected by the economic downturn caused by the COVID pandemic. Under this methodology, the EU was able to cover a greater volume of imports than if, like the United States, it had used data from a period when trade was not affected by the pandemic.

The United States has expressed its concerns to the EU and has given the EU an opportunity to address these issues. The EU has declined to do so.

B. Revision of Action

In light of these developments, the U.S. Trade Representative determined to make a further revision of the action in this investigation as part of the ongoing efforts toward a satisfactory resolution of the dispute. The revision takes account of public comments received in the investigation, advice of advisory committees, and advice of the interagency Section 301 Committee.

In order to exercise the DSB authorization to the United States, the U.S. Trade Representative has determined to add products to the list of products currently subject to additional duties, while otherwise maintaining the trade action as last revised on August 12, 2020. In considering actions most likely to result in the EU's implementation of DSB recommendations or a mutually satisfactory resolution of the dispute, the U.S. Trade Representative has determined that the additional products should be goods of France and Germany, as these countries have provided the greatest level of WTO-inconsistent large civil aircraft subsidies.

As specified in the annexes to this notice, additional goods of France and Germany are subject to additional duties. These goods were drawn from the proposed lists in the April 12, 2019 notice.

In accordance with section 306(b)(2)(F) of the Trade Act (19 U.S.C. 2416(b)(2)(F)), the action includes reciprocal goods of the affected industry. The annual trade value of the tariff subheadings subject to additional duties under the revised action remains at approximately $7.5 billion, which is consistent with the WTO Arbitrator's finding on the appropriate level of countermeasures in the United States' dispute against the EU involving large civil aircraft.

Annex I to this notice identifies the products affected by the revised action, the rate of duty to be assessed, and the current or former EU member States affected. Annex II, section 1, contains the unofficial descriptive list of the revisions made by this Notice. Annex II, section 2, contains an unofficial, consolidated description of the action, reflecting the changes in annex I.

In order to implement this determination, effective January 12, 2021, subchapter III of chapter 99 of the HTSUS is modified by annex I to this notice. The additional duties provided for in the HTSUS subheadings established by annex I apply in addition to all other applicable duties, fees, exactions and charges.

Any product listed in annex I to this notice, except any product that is eligible for admission under `domestic status' as defined in 19 CFR 146.43, which is subject to the additional duty imposed by this determination, and is admitted into a U.S. foreign trade zone on or after 12:01 a.m. eastern standard time on January 12, 2021, only may be admitted as `privileged foreign status' as defined in 19 CFR 146.41. Such products will be subject upon entry for consumption to any ad valorem rates of duty or quantitative limitations related to the classification under the applicable HTSUS subheading.

The U.S. Trade Representative will continue to consider the action taken in this investigation. 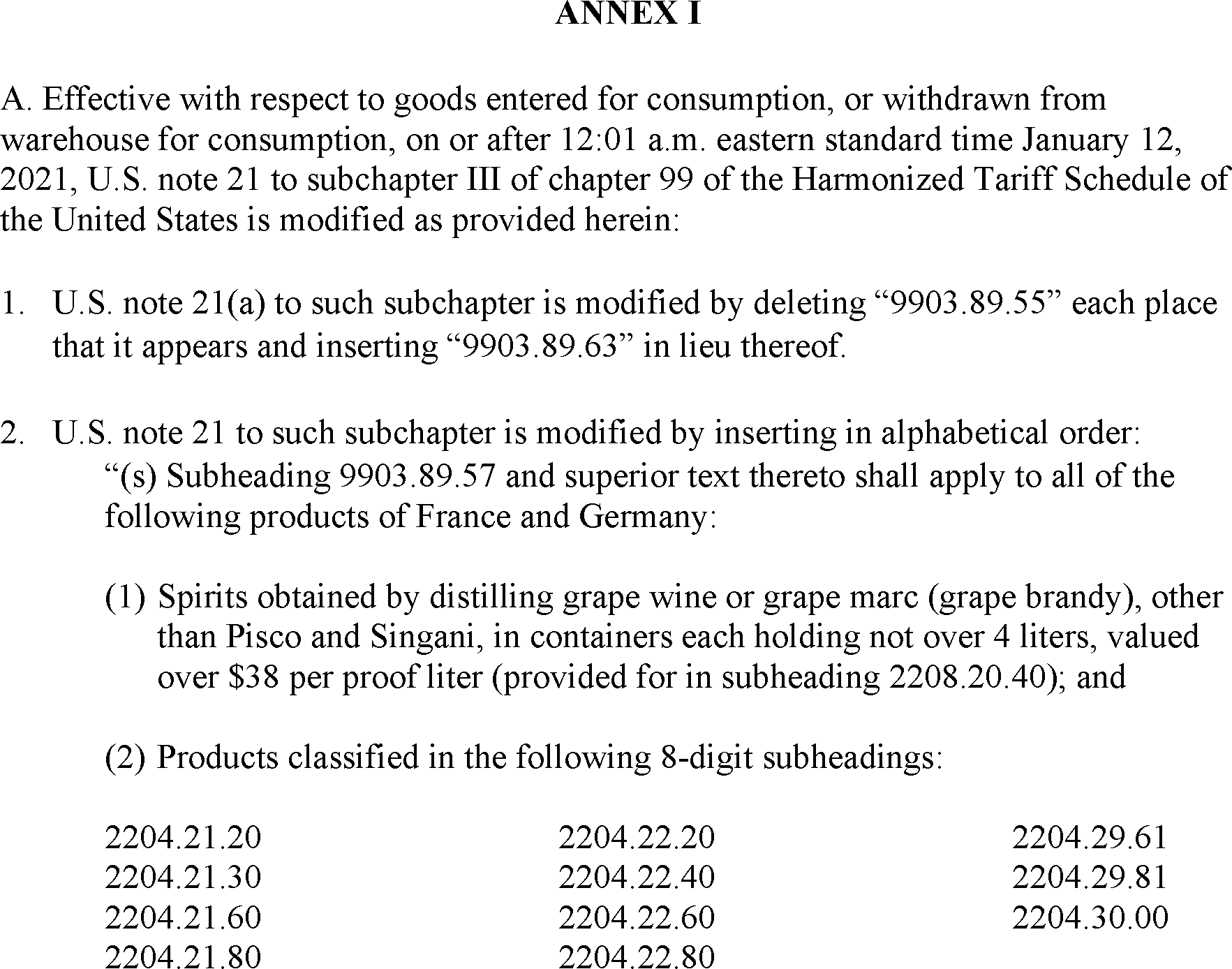 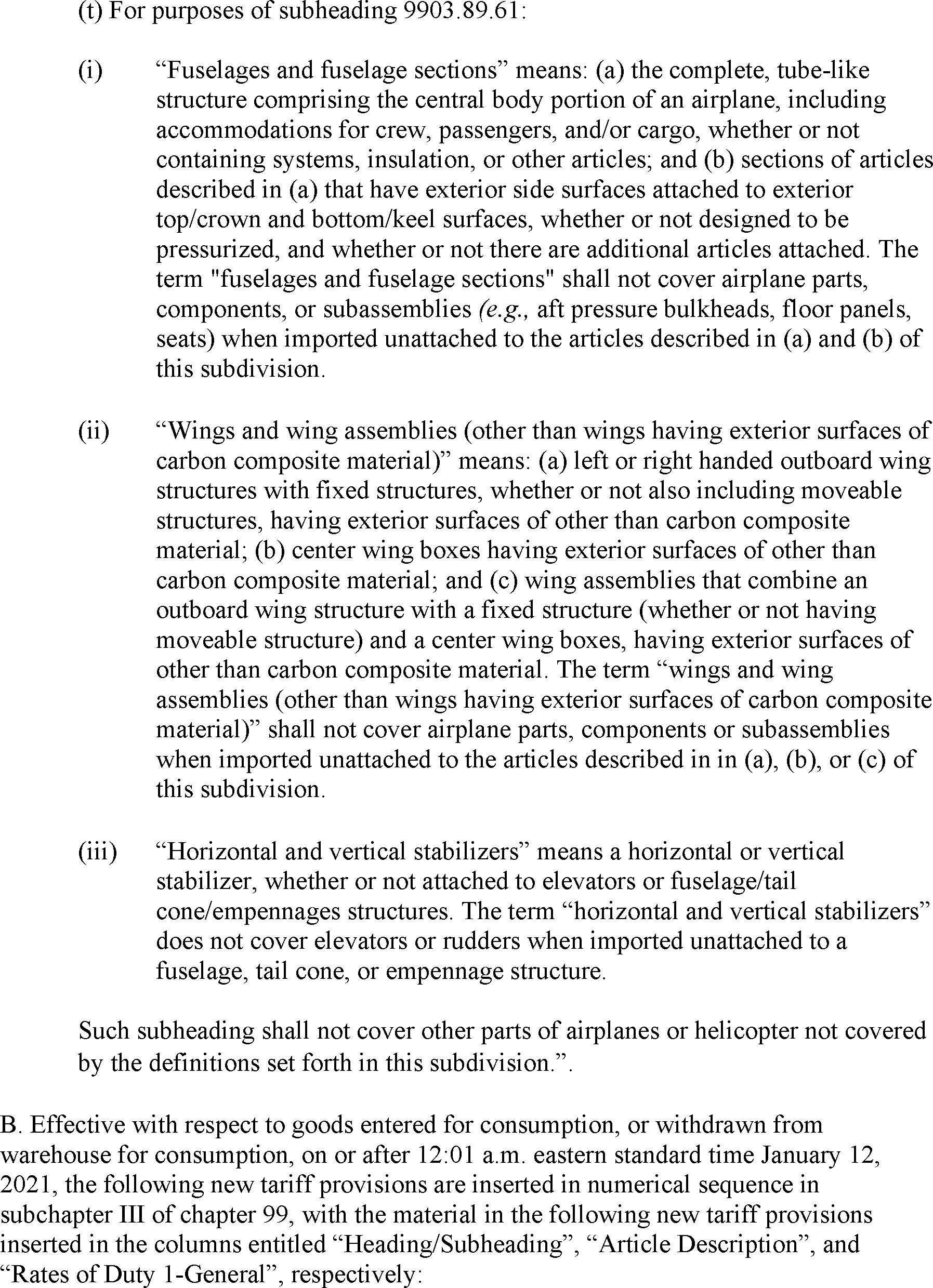 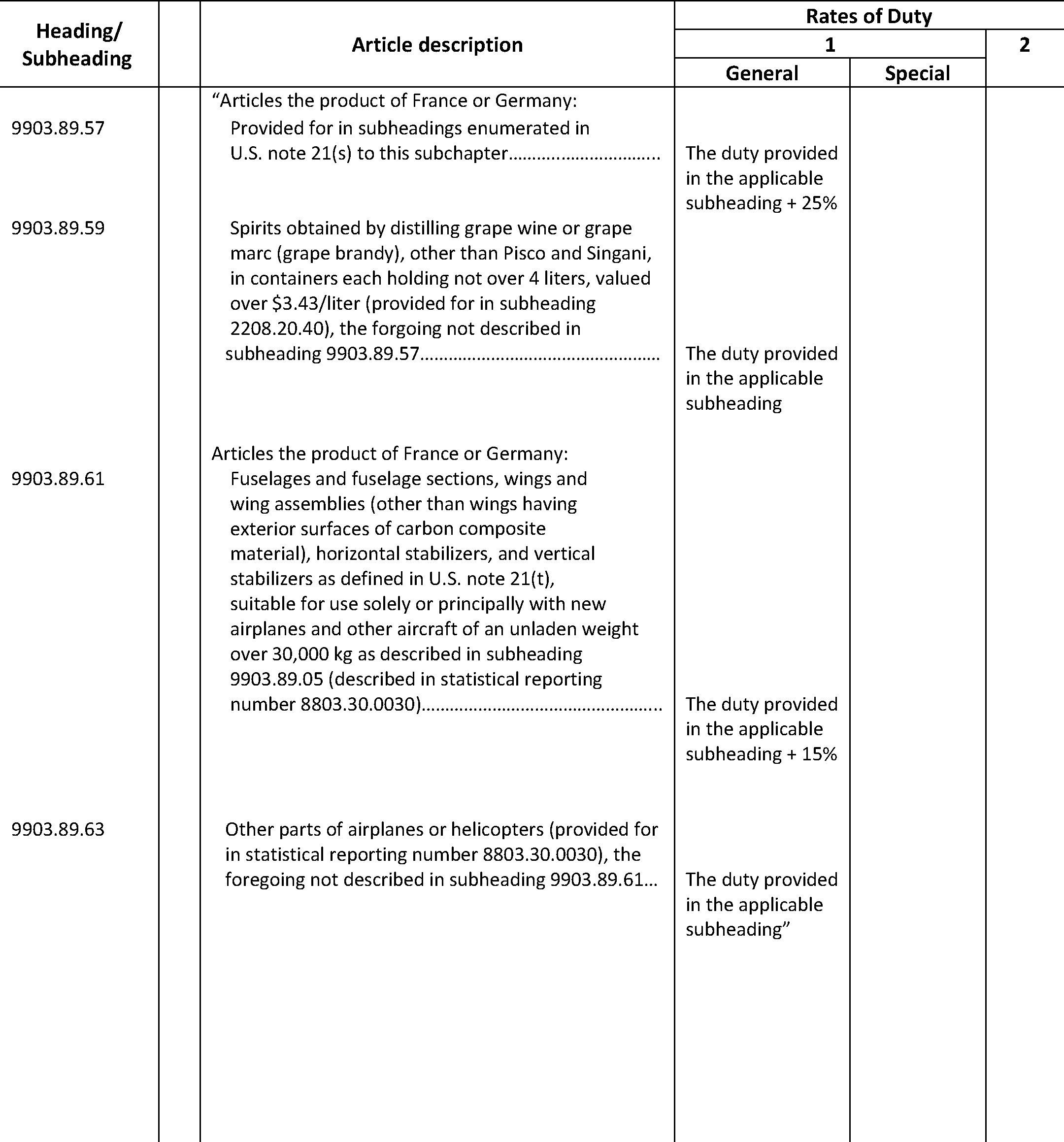 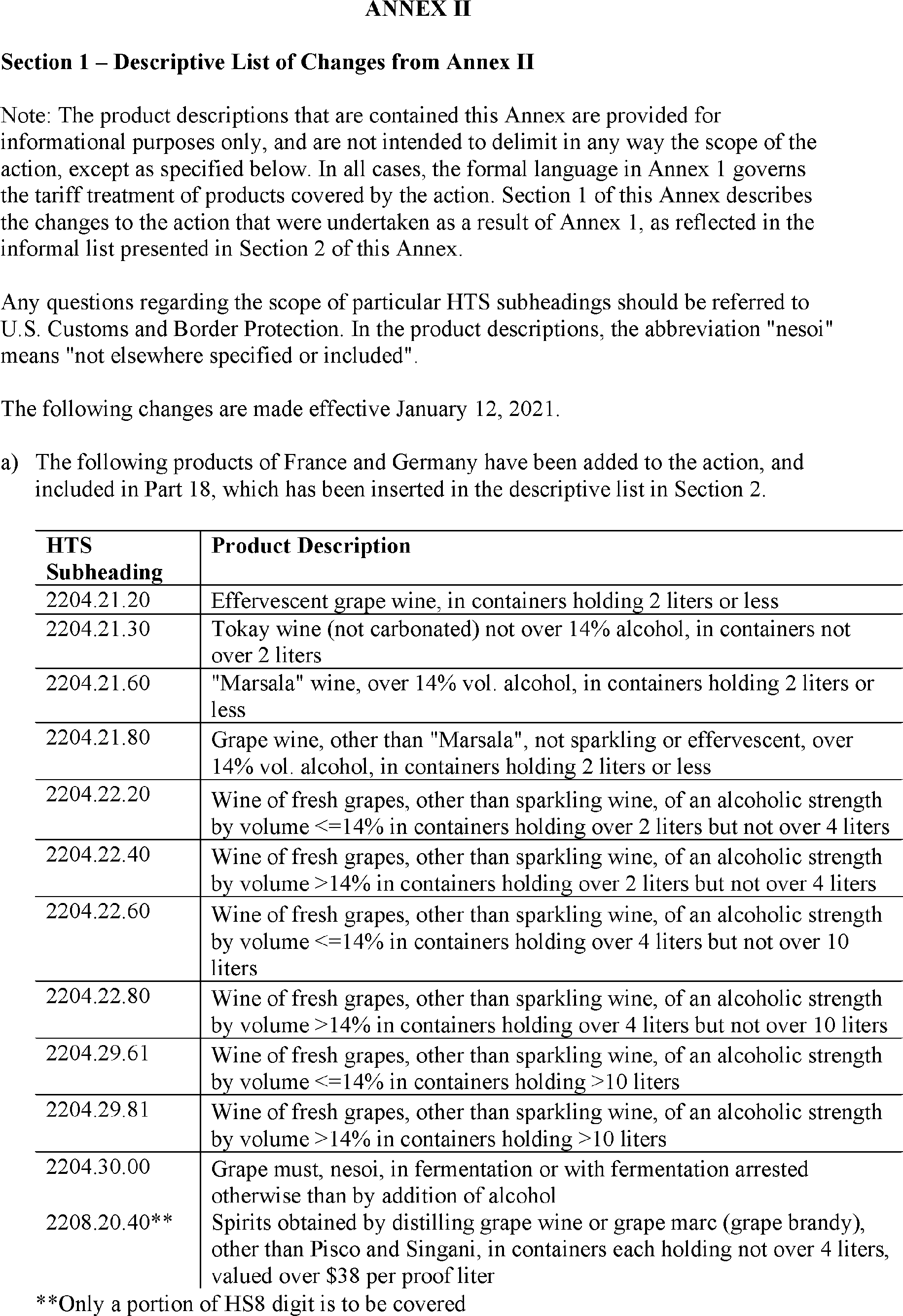 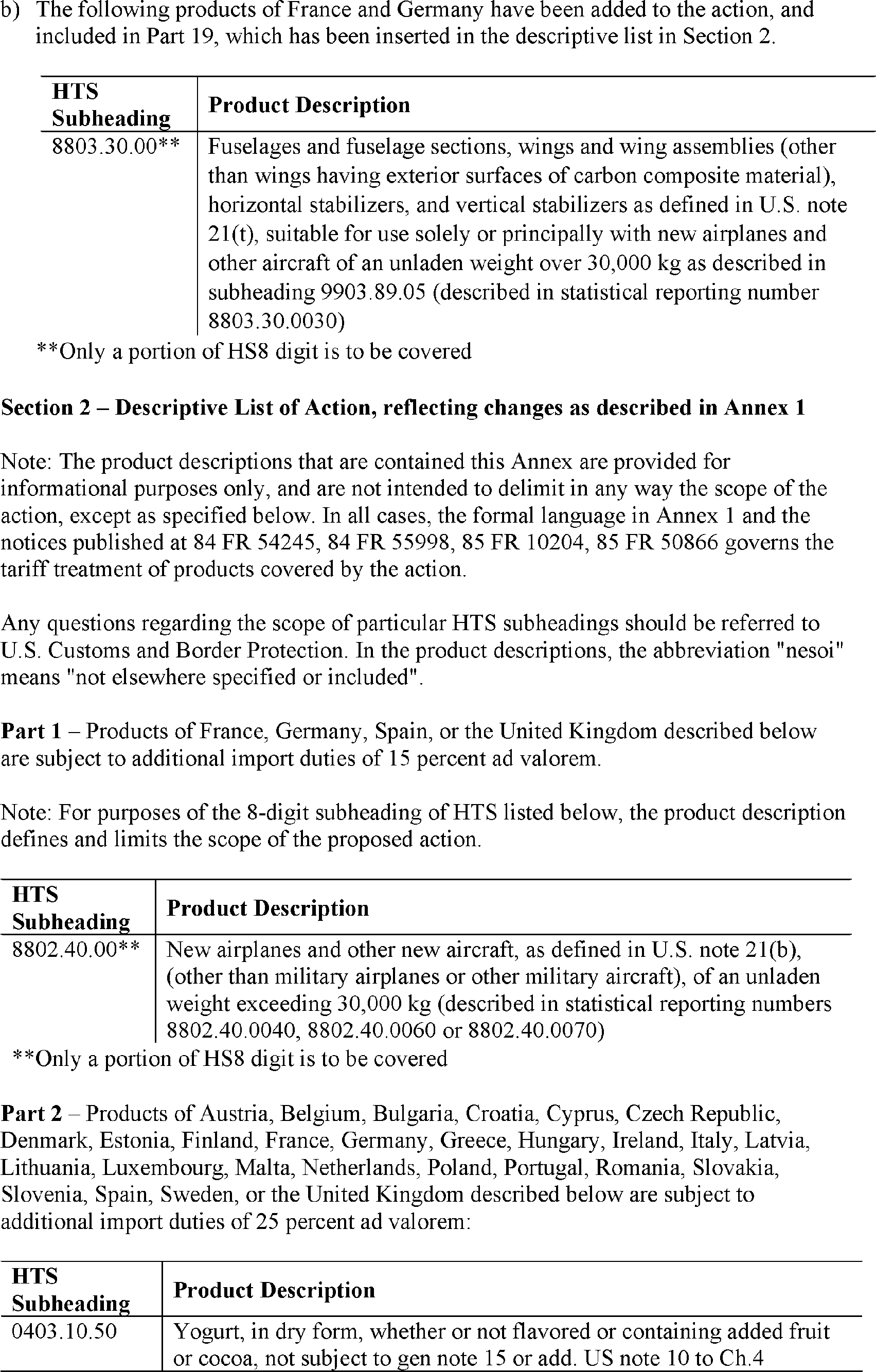 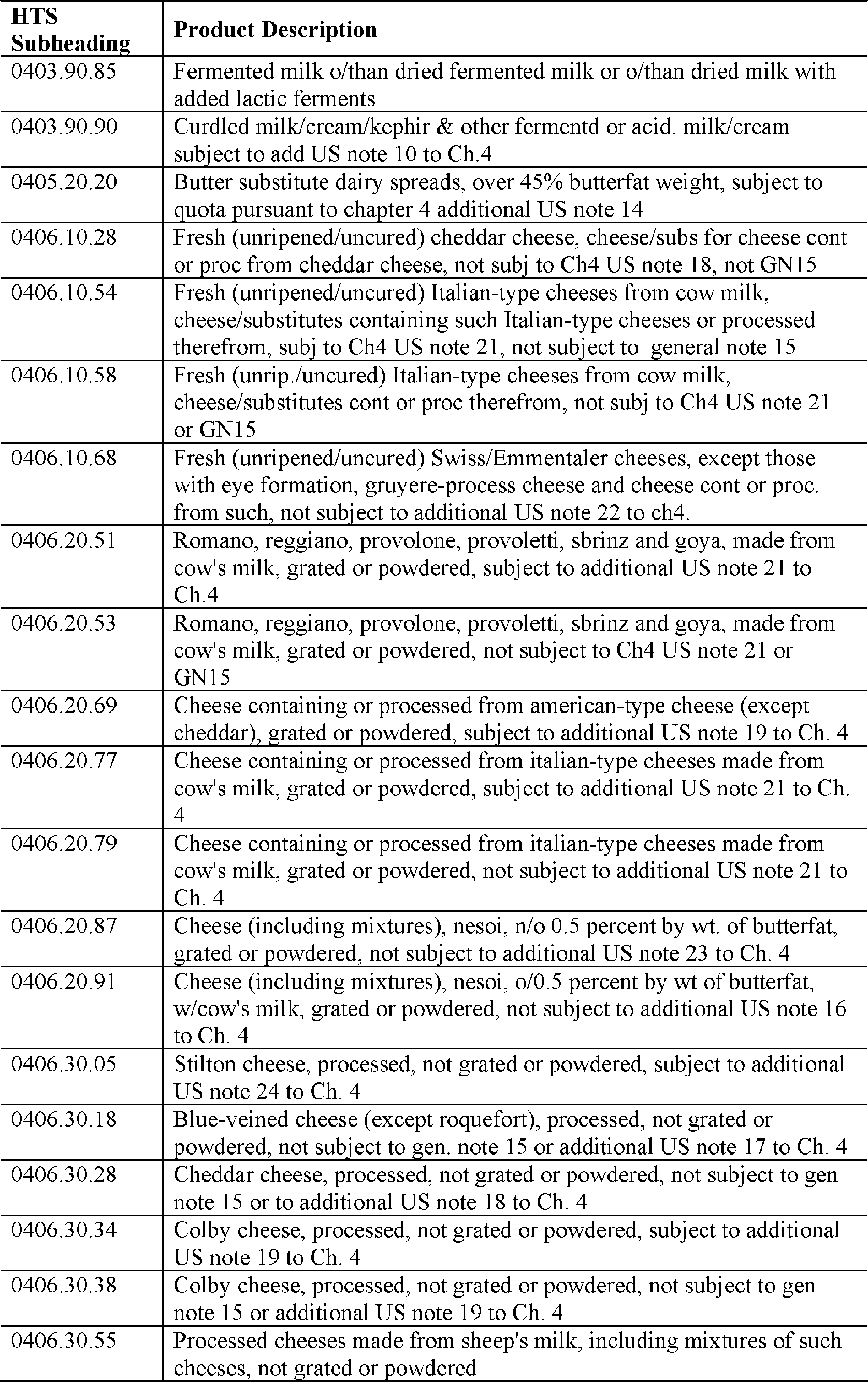 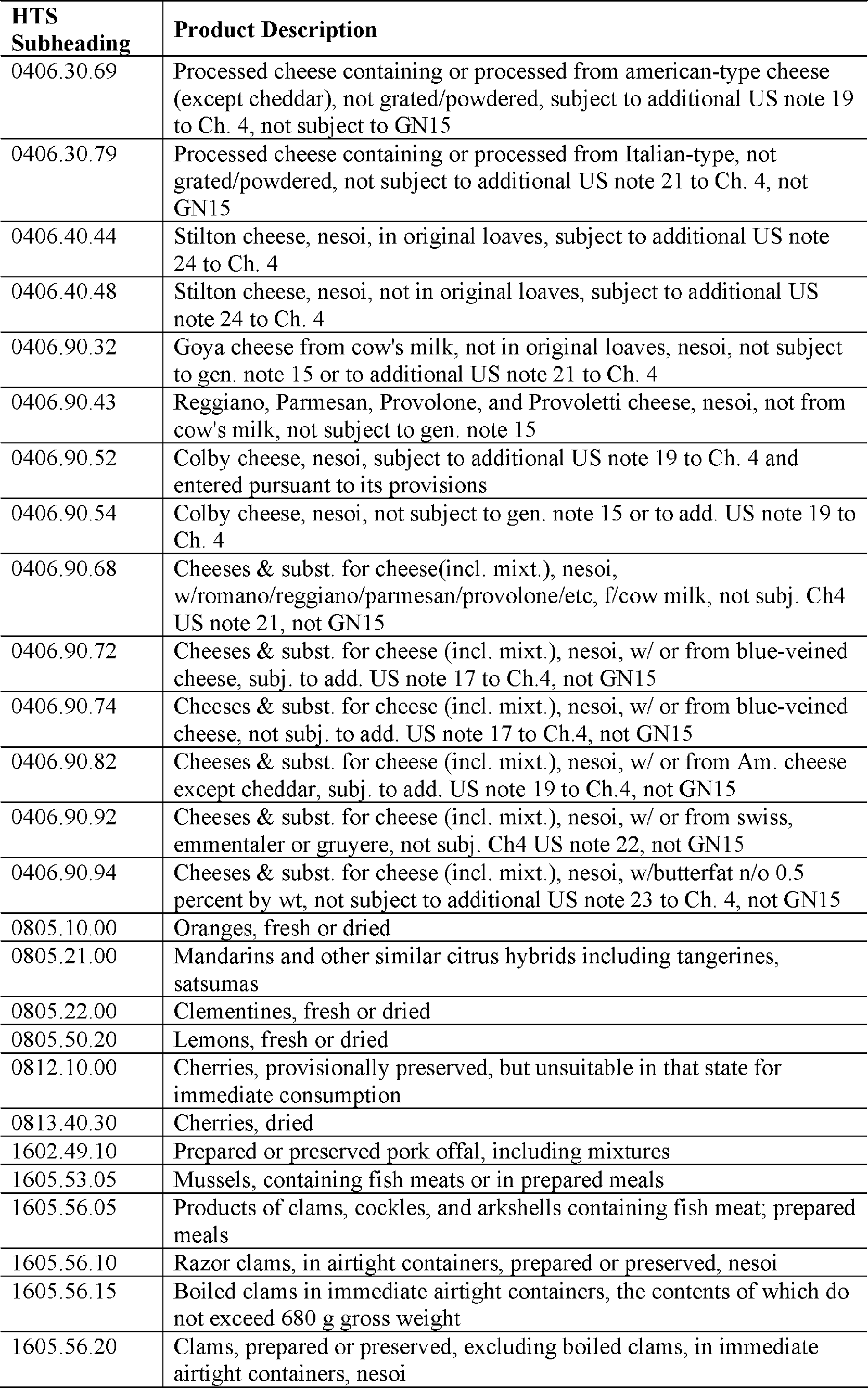 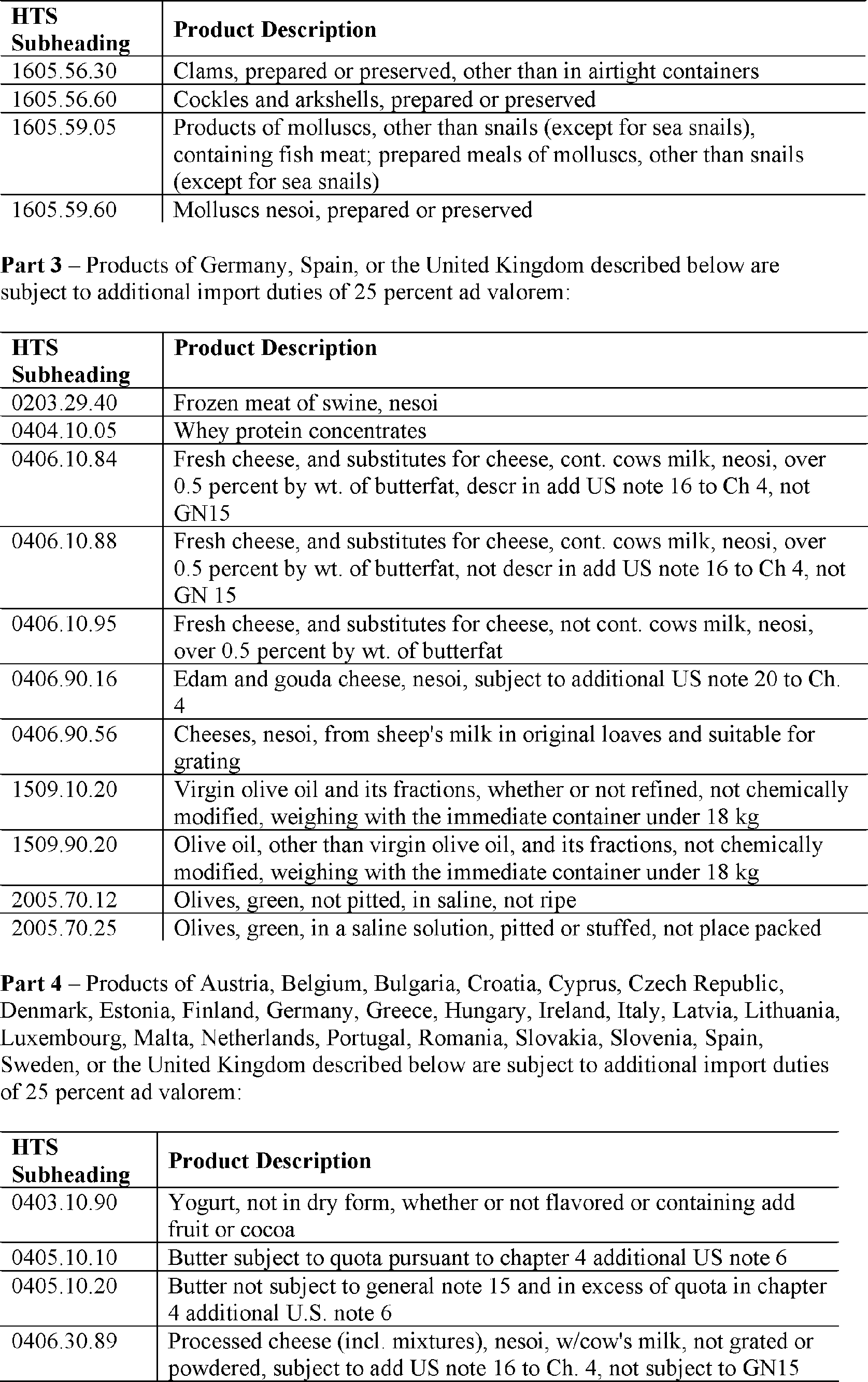 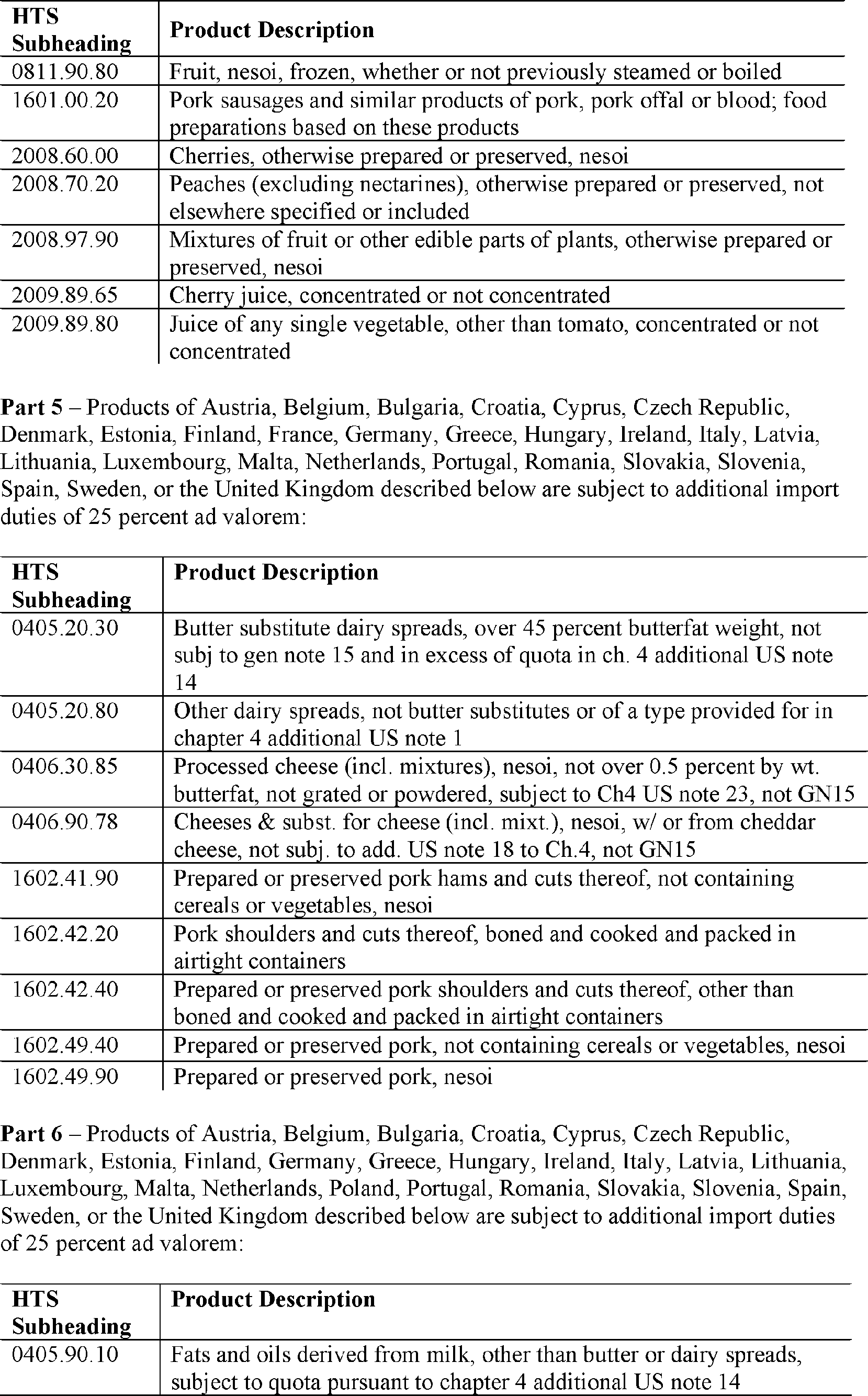 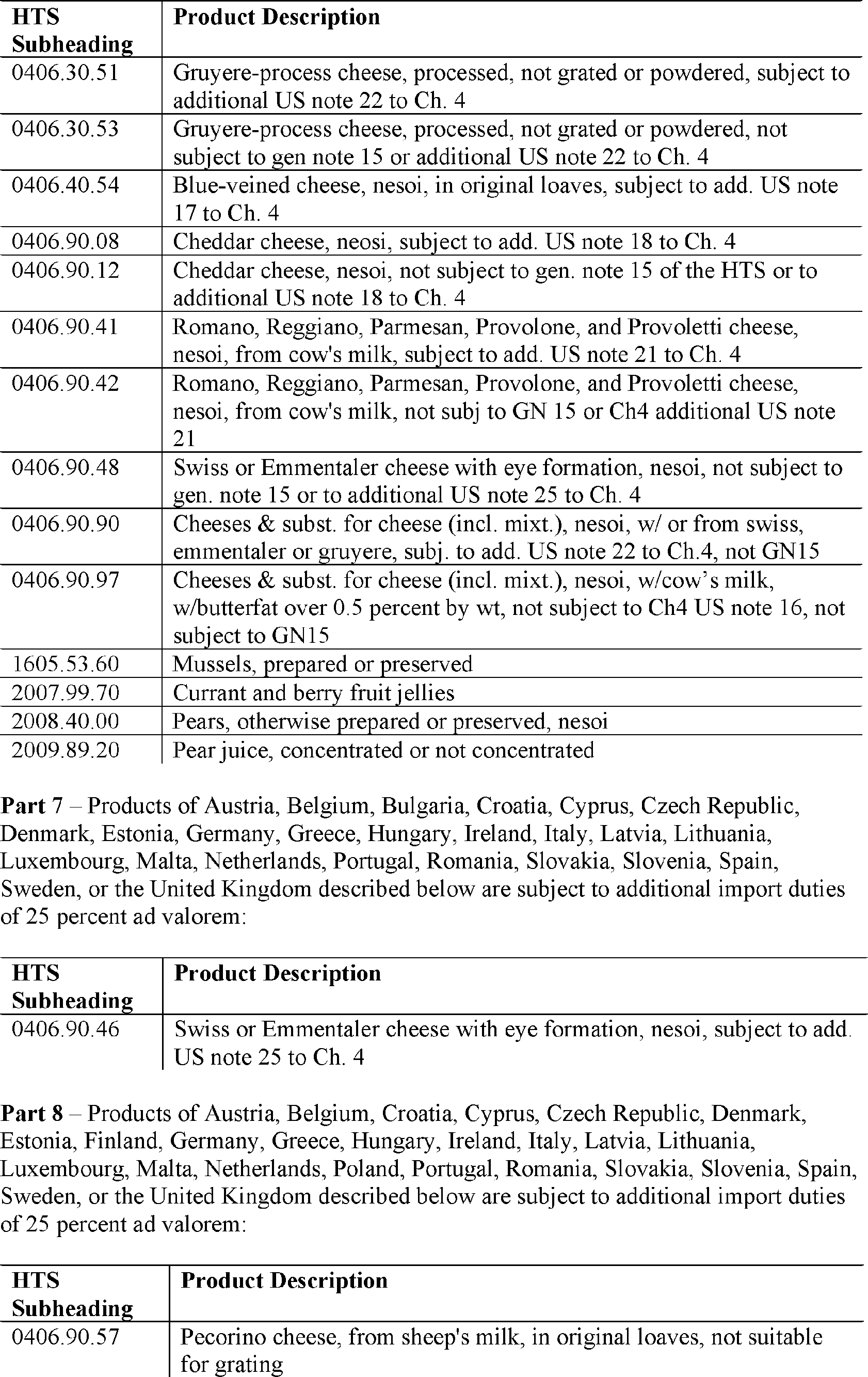 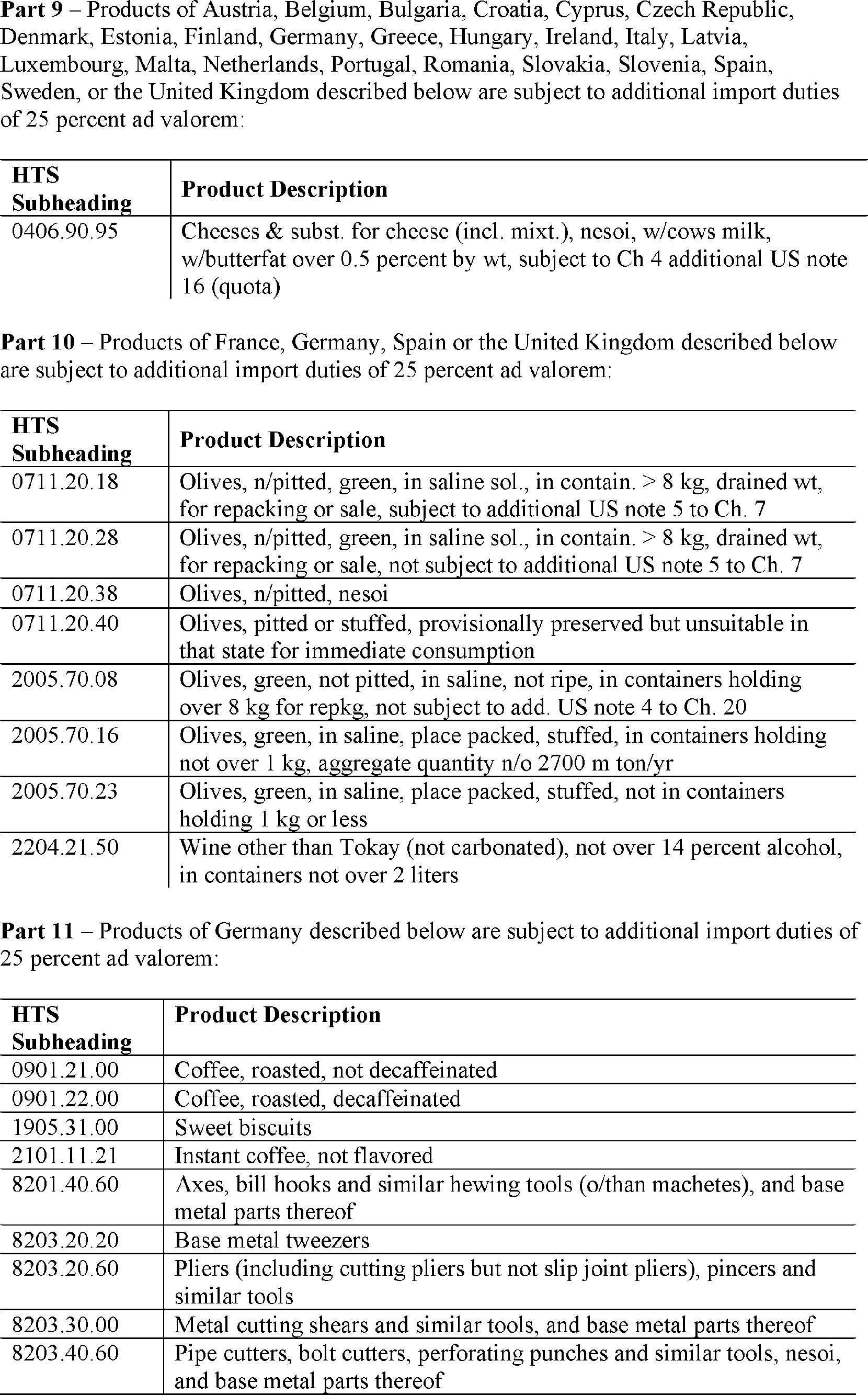 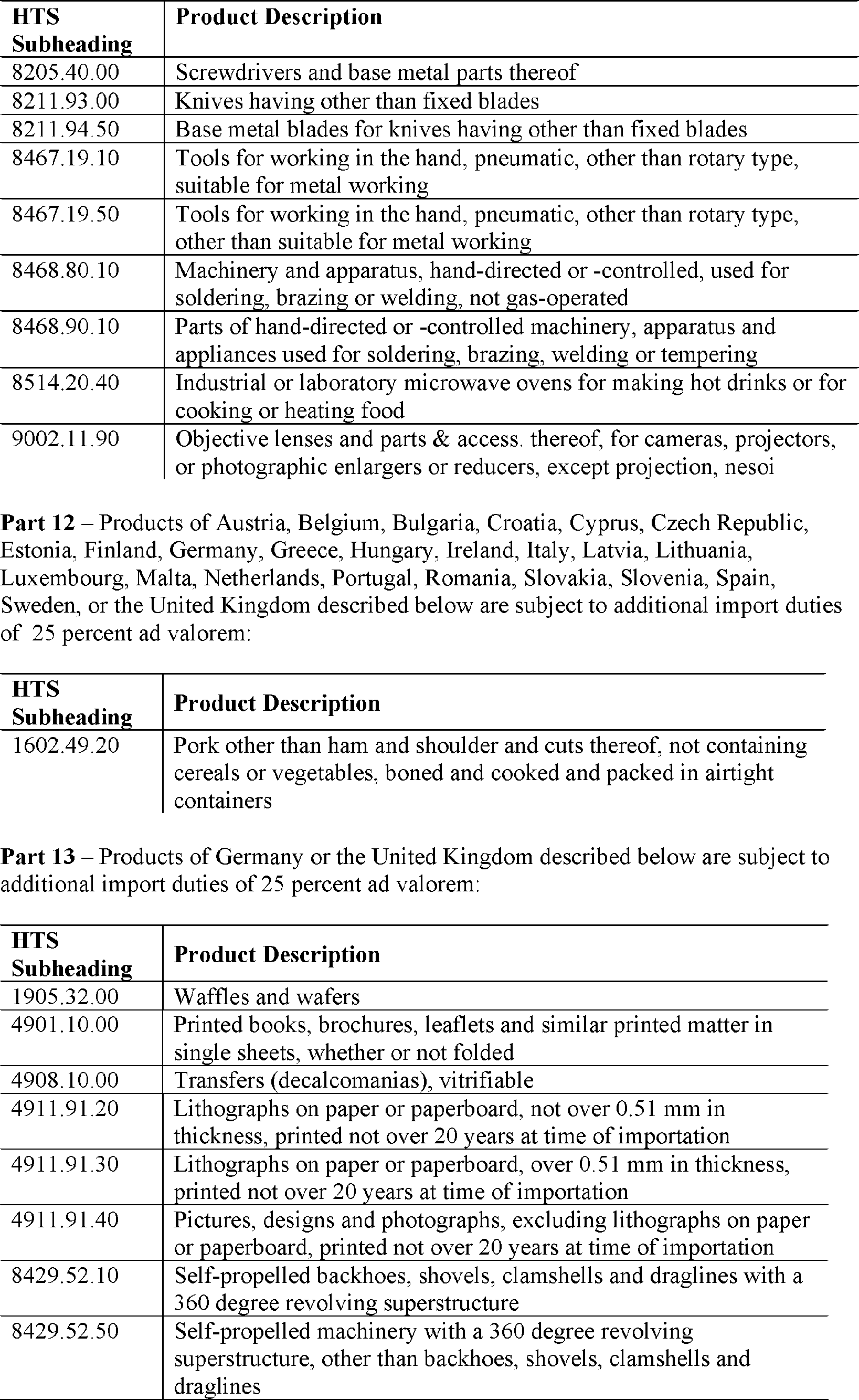 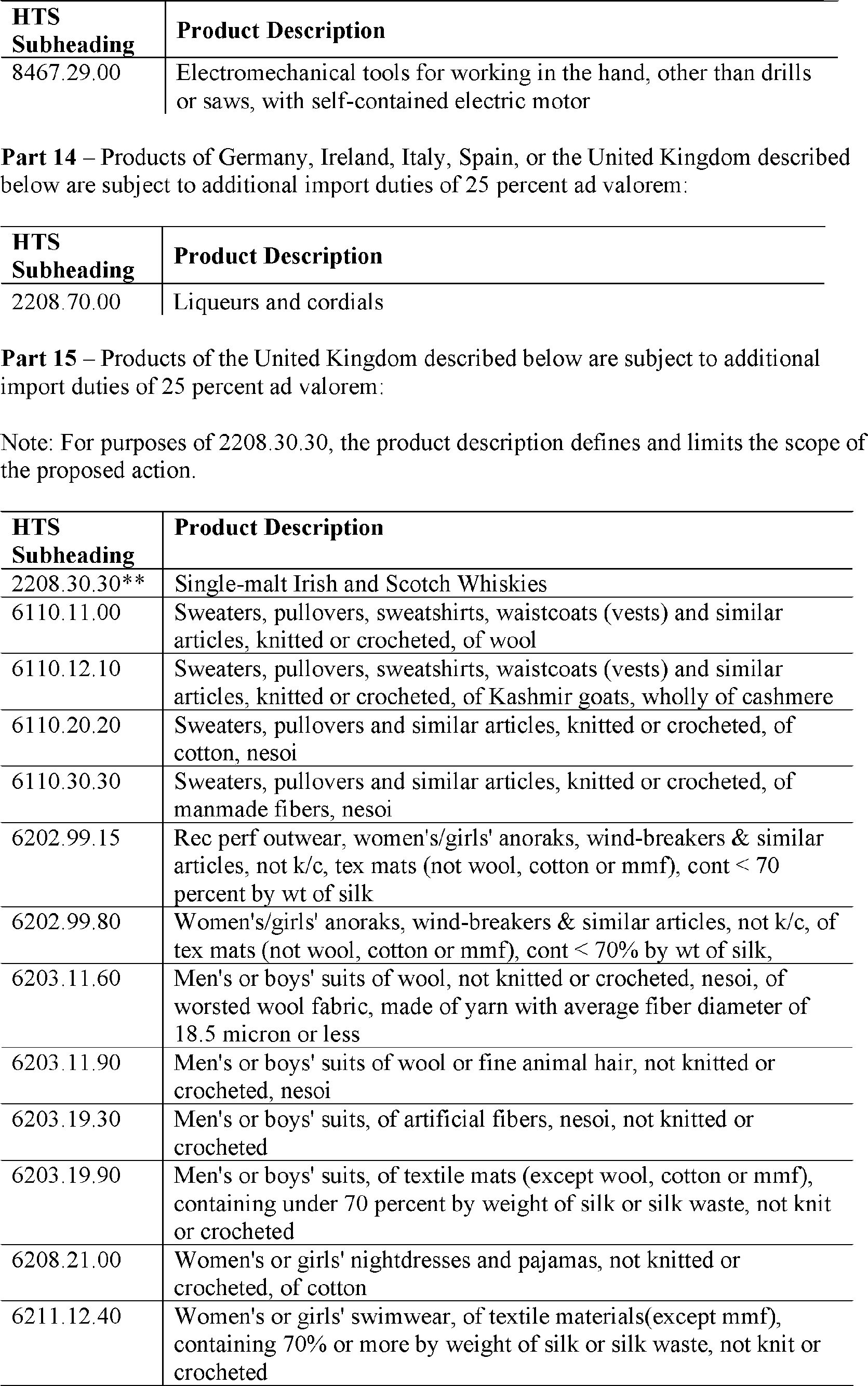 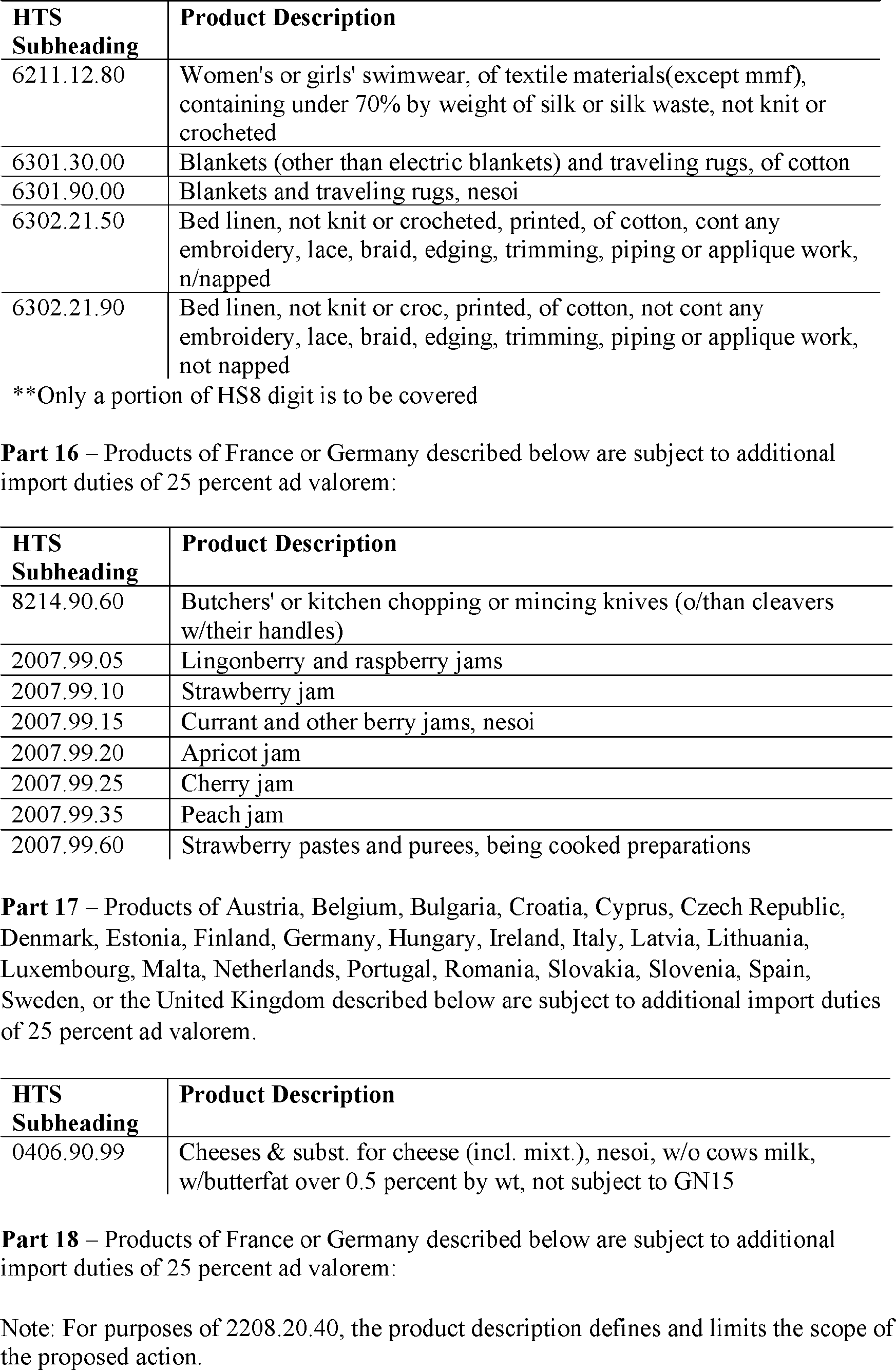 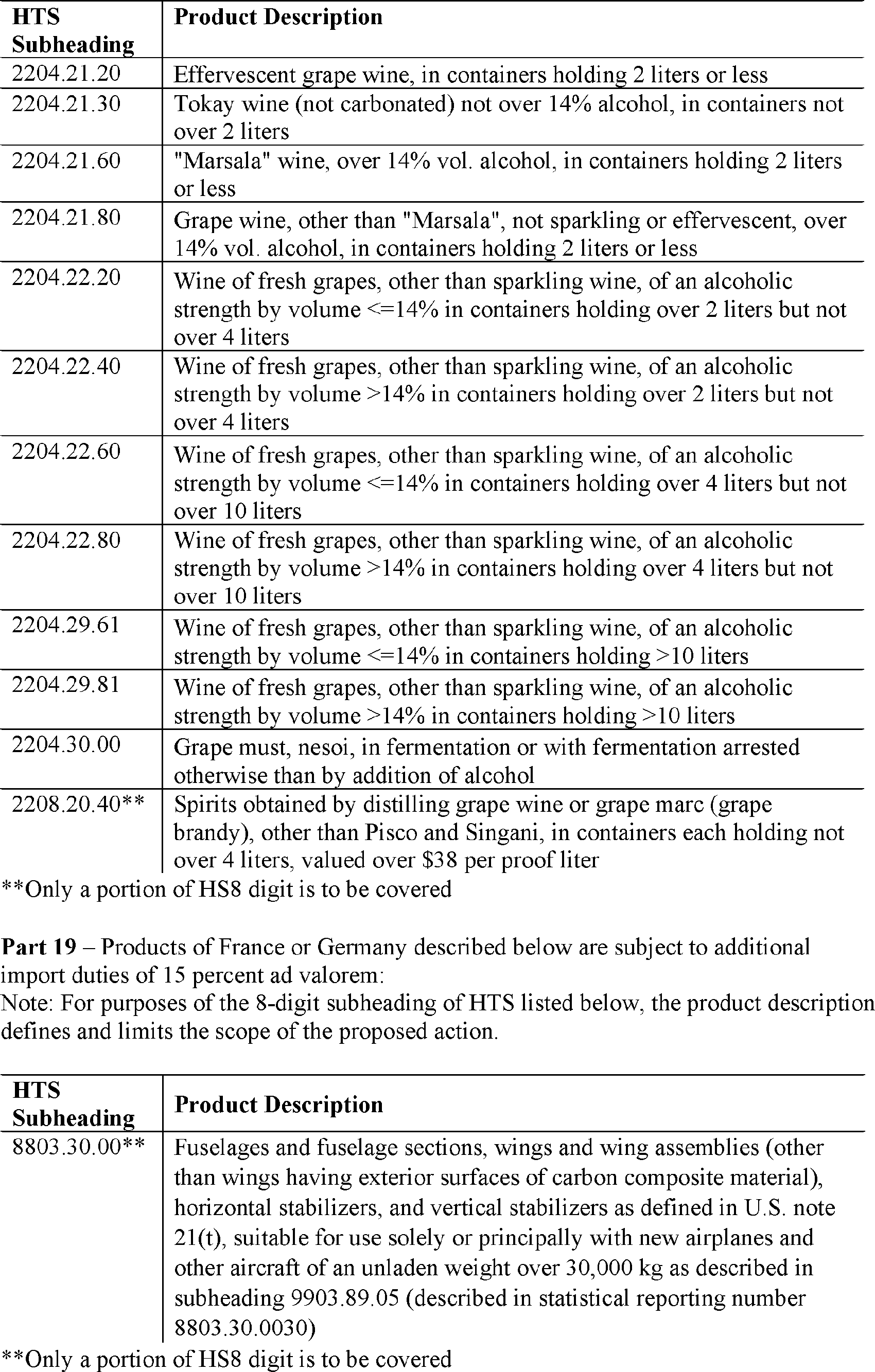