You may examine the AD docket at https://www.regulations.gov by searching for and locating Docket No. FAA-2020-1116; or in person at Docket Operations between 9 a.m. and 5 p.m., Monday through Friday, except Federal holidays. The AD docket contains this final rule, any comments received, and other information. The address for Docket Operations is U.S. Department of Transportation, Docket Operations, M-30, West Building Ground Floor, Room W12-140, 1200 New Jersey Avenue SE, Washington, DC 20590.

The FAA issued a notice of proposed rulemaking (NPRM) to amend 14 CFR part 39 to supersede AD 2012-04-15, Amendment 39-16971 (77 FR 15939, March 19, 2012), (AD 2012-04-15). AD 2012-04-15 applied to all PW JT9D model turbofan engines. The NPRM published in the Federal Register on December 15, 2020 (85 FR 81162). The NPRM was prompted by the need to require enhanced inspection of selected critical life-limited parts of PW JT9D model turbofan engines. Since the FAA issued AD 2012-04-15, PW identified errors in the list of mandatory inspections to add to the ALS. During review of the AD, PW found that AD 2012-04-15 did not include eddy current inspections of the fan hubs. Additionally, PW identified duplicate inspections of the HPT Stage 2 disk tie rod and web cooling holes. In the NPRM, the FAA proposed to require revising the required inspections of selected critical life-limited parts specified in the ALS of the manufacturer's ICA and, for air carriers, to the existing CAMP. The FAA is issuing this AD to address the unsafe condition on these products.

The FAA received comments from two commenters. The commenters were Atlas Air Inc. (Atlas Air) and Boeing Commercial Airplanes (Boeing). The following presents the comments received on the NPRM and the FAA's response to each comment.

Atlas Air requested that the FAA add the figure label to paragraph (g), Required Actions, of this AD.Start Printed Page 21182

The FAA agrees and notes that a formatting issue resulted in the missing figure label from Figure 1 to paragraph (g) in the NPRM. The FAA expects this formatting issue will be corrected with the publication of this final rule.

Addition of Engine Models to Figure

The FAA determined the need to update Figure 1 to paragraph (g) of this AD to specifically reference PW JT9D-7R4G2, and JT9D-7R4H1 model turbofan engines. AD 2012-04-15 included these engines under “7R4 ALL,” however, the FAA inadvertently left these engines out of Figure 1 when identifying the individual engine models in the proposed rule. This revision does not change the number of affected engines that the FAA estimated in the NPRM and imposes no additional burden on operators of U.S. airplanes.

Support for the AD

Boeing expressed support for the AD as written.

The FAA reviewed the relevant data, considered any comments received, and determined that air safety requires adopting the AD as proposed. Accordingly, the FAA is issuing this AD to address the unsafe condition on these products. Except for minor editorial changes and any other changes described previously, this AD is adopted as proposed in the NPRM. None of the changes will increase the economic burden on any operator.

The FAA estimates the following costs to comply with this AD:

Title 49 of the United States Code specifies the FAA's authority to issue rules on aviation safety. Subtitle I, Section 106, describes the authority of the FAA Administrator. Subtitle VII, Aviation Programs, describes in more detail the scope of the Agency's authority.

The FAA is issuing this rulemaking under the authority described in Subtitle VII, Part A, Subpart III, Section 44701, General requirements. Under that section, Congress charges the FAA with promoting safe flight of civil aircraft in air commerce by prescribing regulations for practices, methods, and procedures the Administrator finds necessary for safety in air commerce. This regulation is within the scope of that authority because it addresses an unsafe condition that is likely to exist or develop on products identified in this rulemaking action.

(2) Will not affect intrastate aviation in Alaska, and

(3) Will not have a significant economic impact, positive or negative, on a substantial number of small entities under the criteria of the Regulatory Flexibility Act.

This airworthiness directive (AD) is effective May 27, 2021.

Within 30 days after the effective date of this AD, add Figure 1 to paragraph (g) of this AD to the Airworthiness Limitations Section (ALS) of the manufacturer's Instructions for Continued Airworthiness (ICA) and, for air carrier operations, to the existing continuous airworthiness air carrier maintenance program. 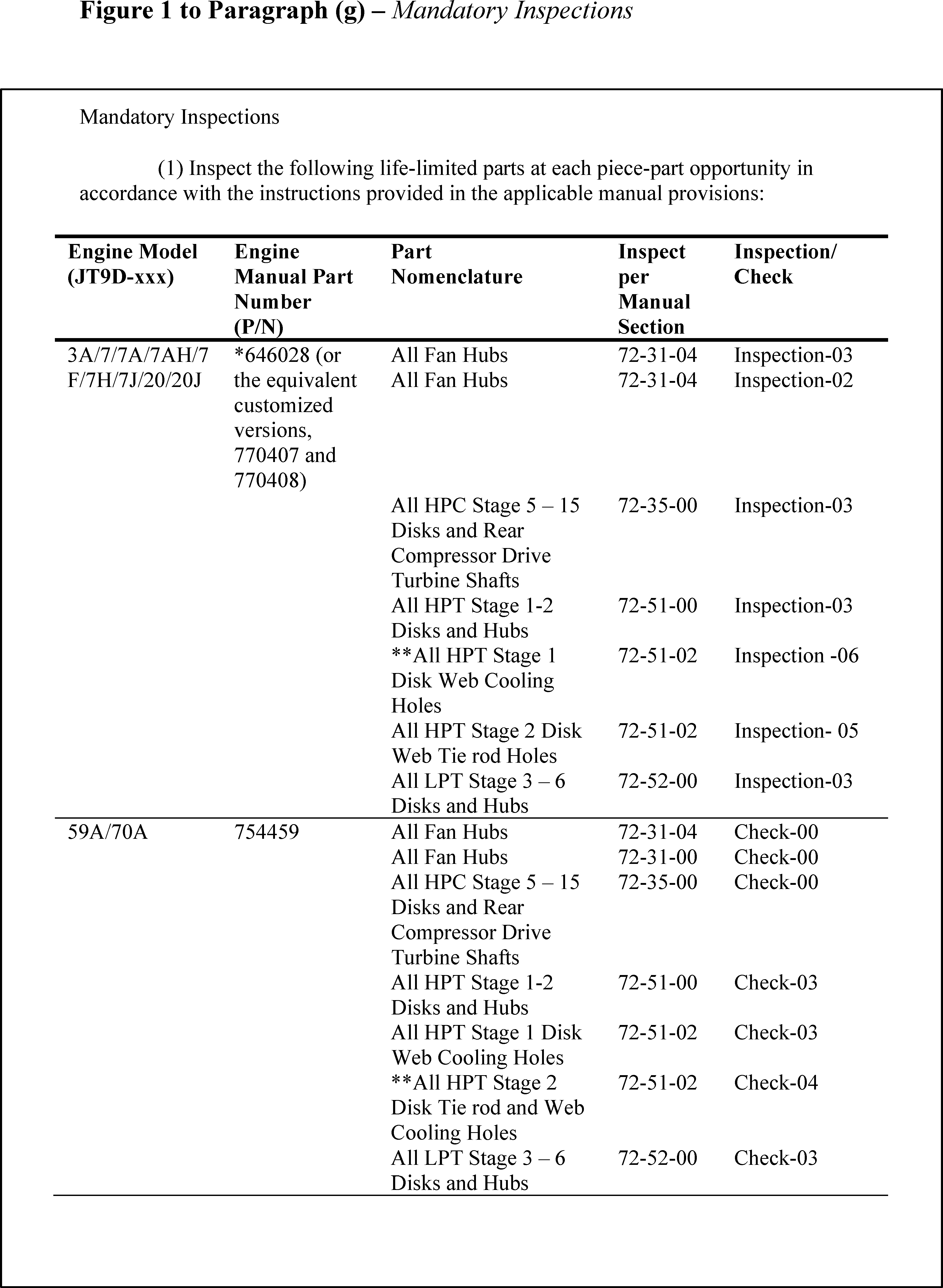 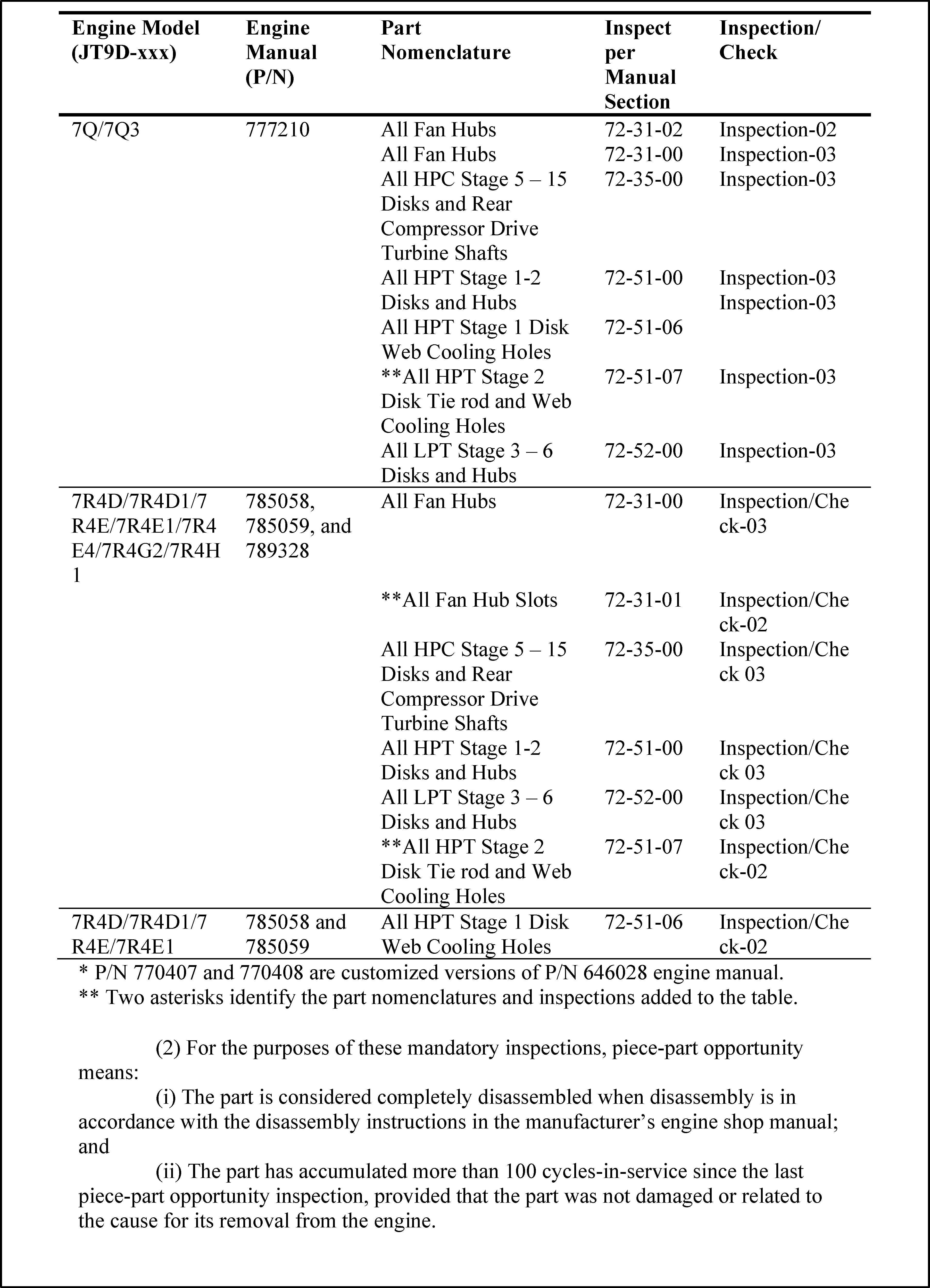 (1) The Manager, ECO Branch, FAA, has the authority to approve AMOCs for this AD, if requested using the procedures found in 14 CFR 39.19. In accordance with 14 CFR 39.19, send your request to your principal inspector or local Flight Standards District Office, as appropriate. If sending information directly to the manager of the certification office, send it to the attention of the person identified in Related Information. You may email your request to: ANE-AD-AMOC@faa.gov.